Diamondbacks 2, Dodgers 4: In Which Goldschmidt Fails To Strike, Twice

Share All sharing options for: Diamondbacks 2, Dodgers 4: In Which Goldschmidt Fails To Strike, Twice

I might have mentioned this before, but: "Meh." It would certainly have been nice to win this game, especially as the Brewers lost and it would have set us up for home-field advantage in the post-season with two games left. However, Daniel Hudson's early game struggles resurfaced with a three-run vengeance, and the Diamondbacks just couldn't get the hit they needed, largely failing to capitalize on a pair of bases-loaded, one out situations. Paul Goldschmidt struck out twice on full counts in both such innings. Somewhere, a pair of kittens died.

Daniel Hudson's ERA in the first inning is now 6.00. Daniel Hudson's ERA the rest of the game is now 3.05. Given his next start will be in Game 2 of the National League Division Series, I can't help feeling a twinge of concern about this one, as he started double, walk, homer to Matt Kemp, putting the Dodgers three runs up before he retired a batter, and sending the Dodgers fan across the aisle into a pants-wetting paroxysm of delight. Kemp for MVP? Hard to look at 38 homers, 123 RBI and a .324 average and argue he is other than the best player in the league. But that's not the same thing at all as Most Valuable. With or without him, LA are still a third-place team.

The Hudson we wanted and expected to see, did turn up, albeit a bit late - after Kemp's homer, he retired the next 15 Dodgers in order. He looked very solid in so doing - one wonders if the roof had been closed, the results might have been seven frames of one-run ball from Hudson, as Kemp's shot might not have made it onto the balcony. He walked one, struck out five and reached exactly 100 pitches. A decent tune-up: at least, it'd seem that way, as long as you got caught in traffic and arrived in your seats at Chase a few minutes late.

Unfortunately, the offense could do nothing with Dana Eveland. He's actually a former D-back, though you might have blinked and missed the five innings he threw for us in 2007. Eveland was part of the Haren trade, but has taken a circuitous route to Los Angeles, going via Toronto, Pittsburgh and free-agency. You wouldn't know it, as he retired the first 11 batters faced, before Chris Young singled to left with two outs in the fourth, breaking up the perfect game. However, the only other base-runner to reach before the sixth was Gerardo Parra, who laid down a very nice bunt single with two outs in the fifth.

Third time through the order, as usual, proved...if not quite the charm, at least, a bit better. Hudson blooped a single down the right-field line, Ryan Roberts followed with a hit of his own and, one out later, Chris Young floated one over the infield. Showing inexplicable caution not previously seen, Matt Williams opted not to send Hudson to the plate - perhaps fearing injury. However, that turned out to be Arizona's sole hit with runners in scoring position on the night. Miguel Montero struck-out and, although that was the last of southpaw Eveland, Goldschmidt fared no better against the right-hander out of the Dodgers bullpen., and we left the bases full of D-backs.

After Hudson left, Joe Paterson and Brad Ziegler got us safely through the top of the eighth, and Arizona threatened again in their half, with the help of the Dodgers bullpen, who combined to issue no less than five walks and a passed ball in that inning. However, once again, Arizona couldn't quite manage to get the timely hit they needed. While Montero did work a walk this time, his PA also including a run-scoring passed ball, Goldschmidt struck out with the bases loaded for the second time. A Geoff Blum pinch-hit walk drove in another run, bringing Parra up with the tying run in scoring position. However, he could do no more than fly out harmlessly to left.

We made one final stab in the ninth, a heroic dive to first by John McDonald getting him in under a high throw from the Dodgers. Lyle Overbay then hit into what could have been a double-play, but a hardcore slide from McDonald broke it up - Sean Burroughs had done something similar in the eighth. Inexplicably, Ryan Roberts then tried to bunt, but that simply provided an easy out back to the pitcher, and Aaron Hill flew out to center, ending the Arizona winning-streak at four games. I repeat: meh... 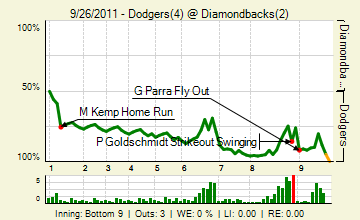 No comments with more than one rec, so I'll give it to Backin'the'Backs, out of sympathy for what seems like a poor day all around...

and I got a ticket on the way home FML