Barring a mass boycott of the final series against the Dodgers, it does look like the Diamondbacks will improve on overall attendance at Chase. There were over 132,000 present at Chase for the weekend series against the Giants. That's the first time there has been over forty thousand at the park for each game, in a set against an NL opponent, since the Dodgers came to town in late July 2003. With three games left, they are about 70 thousand up on the same point last year. This season should surpass 2010 and 2005 easily, and perhaps also 2006. That's impressive, given at one point, Arizona were over 100,000 behind the 2010 pace.

Let's dig into the numbers a bit further.

How was baseball attendance overall this year?
Up fractionally. And I mean, fractionally: the increase is about 0.6%, and works out at 195 additional fans per game, leagues-wide. However, that's actually good, since it reverse the downward trend which has been seen since the economy went in the tank, with three consecutive years of declines - the 2010 total number was over five million below the 2007 one. Indeed, it seemed to be continuing into the first two months of 2011. Through the end of May, crowds were down about 500 per game, sparking hysterically overblown headlines like Is Baseball Dead? Apparently, the shambling corpse begs to differ.

However, there have been extremely wide differences in team performance. Off the bottom of the charts by themselves are the Dodgers, down over 7,700 per game. They failed to crack three million for the first time since 2000, and if you saw any of the recent D-backs games at Dodger Stadium, you'll know that the reported attendance was probably twice or more the actual number of fans in the park. With no sign the McCourts will be gone next year, that's when the real pain could come in Chavez Ravine, as season-ticket holders don't renew. Our expansion sibling in Tampa - always a useful yardstick - also dropped over 4,000.

On the flip side, the majority of teams saw an increase. Last year's World Series teams, the Rangers and Giants, occupied two of the top three, but the highest uptick, of 5,546, was in Cleveland, where the Indians haven't had a winning season since 2007 [and at 80-79, might not this year]. In some ways, this is a dead-cat bounce, as they had barely 17,000 last year. However, things looked even worse for them to start with: after Opening Day, the rest of the six-game homestand averaged below ten thousand, reaching its nadir on the Sunday, at 8,726. The Pirates' faux-resurrection also saw them post a gain of more than four thousand.

How does the Diamondbacks' number compare to 2010? 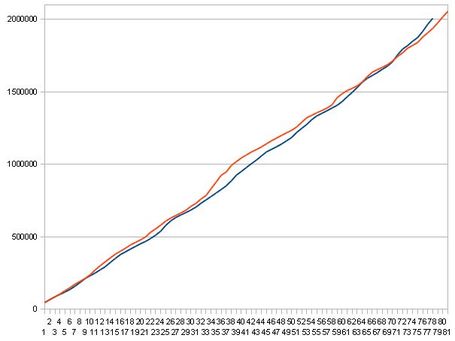 The red line is last year's cumulative attendance, the blue line the 2011 number. As you can see, after starting off pretty close, 2010 started to pull away. The big leap in Games 34-36 is the result of the Yankees coming to town. Both the 2004 and 2010 series against them did reach the 40,000 per game mark mentioned in the opening paragraph, and this year's opponents in the equivalent games didn't have quite the same draw. The gap reached it's maximum after game #38 [this year, that was a Saturday game in mid-June against the White Sox], at a little more than 106,000.

At that point, a sub-two million season appeared certain, and it seemed credible last year's record low for a single game of 15,509, from an August contest versus Cincinnati, might be broken. The mark had already been challenged in the opening home-stand, when only 15,746 showed up for a game against the St. Louis Cardinals. However, there was one very big difference between 2010 and 2011: the team was playing well. Even at the point of game #38, they were in second, and as they continued to hang on and challenge the Giants, crowds picked up. And if anyone ever doubted Phoenix is a town of bandwagoners...

Did the Diamondbacks turnaround, turn attendance around? 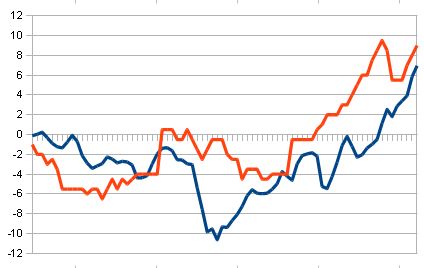 The blue line is the difference between 2010 and 2011 attendance, in tens of thousands. You'll see the pattern described above, dropping in the first half below even, before turning around in the second half and climbing back into positive territory after the 2001 re-union weekend. And the red line is the number of games back Arizona were at the time. Clearly, it parallels the team's fortunes very closely - it seems to lag them slightly, as word of their play, good or bad, takes time to seep into the collective consciousness. However, as noted, the weekend was the best attended series against a divisional rival for more than eight years, so that process seems complete.

Now, a lot of other things factor into attendance for a single game. Opponent, day of the week, promotional giveaways [the Ryan Roberts bobblehead sell-out on Saturday proves that!] all play into who shows up: trying to winnow out how much of it is due to team performance is basically impossible. But what I've done is try to mitigate some of those factors, by looking at attendance over a whole week. For each homestand lasting six or more games, here is an attendance figure for the week, and opponents [some weeks had seven games, some six - for the former, I've dropped the Thursday game to even things out with six for each].

The series against the Twins and White Sox provided boosts to cloud the picture, as all their snowbird fans came out from under rocks before going back to Sun City, but here again, you can see the trend going generally up. Obviously, the current home-stand is special, but averaging close to 27,000 for series against the Padres and Rockies [sub-.500 teams with no significant local fan-base, for whom we possess the contempt of over-familiarity], is definitely an encouraging sign. The last time we played them back-to-back at Chase was almost the same time in 2007, in the thick of a pennant race there too, and the total crowd then was a very comparable 166,681.

What does this mean going forward?
The first test of the team's new-found popularity will be in the playoffs: will they sell out, and if so, how quickly? Though Chase Field was basically sold-out for the 2007 post-season, with crowds in excess of 48,000 for all the games there, it was touch and go, even for the Championship series, with more than 10,000 tickets left just three days before Game 1. However, it's worth bearing in mind the 2001 campaign was a good deal worse in this regard. While everyone remembers Chase Field rocking to its foundations in the World Series, the crowd for the Game 1 of the NLCS that year was a mere 37,729.

2007 does provide a nice bench-mark for what kind of boost the team might expect next year, though it will likely depend on how far the game goes into the post-season. In 2008, attendance at Chase went up by 2,280 per game. The boost was more than double this amount after 2001, but the team the following year was also considerably better there than in 2008, winning 16 additional games and returning to the post-season again. We've seen how attendance is directly affected by the Diamondbacks team performance and, while there is a solid fan-base who will turn out regardless, it seems winning is a very significant factor.