A few days ago on Twitter I was mulling over whether or not I'd want to recap the game in which we clinched the NL West. On one hand, I'd get to recap a pretty important moment, but there'd be a tiny bit of pressure to make it not terrible. After we took it last night (woot!), I wondered what it'd be like to recap a game that didn't matter a whole lot (like 2010, Wailord...). Well, after witnessing tonight's "game", maybe semi-meaningless games can be entertaining. Milwaukee won today, so we gained no ground in the race for home field, but that's more of a footnote at the bottom of tonight's stomping of San Francisco. In case their hearts weren't thoroughly torn apart yesterday, Ian Kennedy and the offense made sure to get the job done today. The short description of the game: the Giants got owned. The more drawn out version can be found below.

Ian Kennedy was on the bump today in search of his 21st win, which is an incredible feat in and of itself. Blah, blah, wins are circumstantial and not representative of skill, whatever. His emergence as an ace is arguably the best story of the season, and we're going to need him to continue his awesomeness to do anything in the playoffs. The first inning, luckily, wasn't representative of Kennedy's night at all; San Francisco had two on and one out to open up the game, and a single from Pablo Sandoval scored one to give the Giants an early lead. Despite Beltran moving to third on a flyout from Brett Pill, IPK got out of it without any further damage.

Then, everything else went our way for the rest of ever. Like, seriously. Because it would probably be a little bit too wordy to try and detail everything that happened, here's a summary, courtesy of Yahoo!. Generally, I feel like using a play-by-play is more of a cop-out, but you try to put the below into a paragraph...

Yeah, that's... a little bit ridiculous. Ian's double wasn't on one of those missed-dive flyballs, either. It was a rock-solid drive to left-center. Maybe he just wanted to prove that our pitchers can out-hit their team as well, as the double accounted for as many runs as San Francisco managed on the night. The score was 6-1 after one inning - isn't that just special?

Neither team scored again until the sixth, where the Diamondback offense again exploded after the Giants scratched across a run. Again, for the sake of brevity (can you even call this brief?), here's the play-by-play, courtesy of Yahoo!:

And thus, the score was 11-2. AND HENRY BLANCO LEGITIMATELY TRIPLED. Like I said, first, we crushed their hopes for the season, then their hearts. Maybe now they can stop with the whole "OMG WINNING THE WORLD SERIES IS TORTUOUS" thing, or at least change their perspective on it. The offense's explosiveness apparently reached epic levels, knocking out the power for at some part of Phoenix (I'm sure you guys can give a better description in the comments - I don't live in Arizona ;_;), including Chase Field, after a single from Aaron hill that led off the seventh. The game was delayed until power was restored, and Geoff Blum was sent up to get the game back going, batting in place of Chris Young. Blum showed that the offense had gone nowhere during the brownout, doubling home Hill to put the score to 12-2. Lyle Overbay walked to put two on, and following a Ryan Roberts line out, Parra doubled home Blum (13-2) and Colin Cowgill grounded out to score Overbay (14-2). The game was just... one of those.

Kennedy had been lifted prior to the power outage in the seventh, as there was really no reason to keep him in the game. After all, he's got himself a Game One to start in just a week. His night ended with a line of 6IP, 5H, and 2ER with four strikeouts and two walks. It's too bad Clayton Kershaw's so damn good, otherwise Ian might be top-three or so in the Cy Young race. 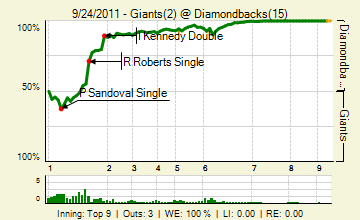 So that was that. The GDT was pretty chatty, as there was nothing distracting us while the power was down; in total, we managed nearly 800 comments, not bad for a Saturday night. Unsurprisingly, a home-alone DbacksSkins led the way with 115 comments, with only BulldogsNotZags sharing the podium of triple-digit commenters on the night. Also present tonight were Jim McLennan, NASCARbernet, piratedan7, asteroid, mrssoco, Augdogs, Clefo, CaptainCanuck, emilylovesthedbacks, 4 Corners Fan, Zavada's Moustache, blue bulldog, dbacks25, snakecharmer, Jdub220, porty99, shoewizard, AZDBACKR, hotclaws, oldspartan, kishi, BattleMoses, Brian MacKinney, dbacksfann, Stile4aly, GuruB, Sprankton, Wimb, and rfffr.

Comment of the Night goes to Stile4aly, with a comment I'm not sure I understand the significance of. Whatever, it has a Jay-Z reference: Tomorrow's game between Josh Collmenter and Tim Lincecum is a) a SnakePitFest, and b) an opportunity to give Timmeh a losing record on the year. So, it's probably more meaningful than today's, even if Ian guaranteed at least a tie for the NL wins lead in 2011. Ok, so maybe it's as meaningful. It's a 1:10PM MST start time, so be there or miss Lincecum's hair. Or, er, potential Giants tears, too.