In case you hadn't heard, the Arizona Diamondbacks clinched their 5th NL West title tonight. Joe Saunders pitched 7 strong innings, only giving up 1 earned run on a solo home run by Orlando Cabrera (WHAT?!!??), and the offense rallied to score just enough late to give Matt Cain a rare loss against Arizona. Details after the jump.

When you win a lot of come-from-behind victories, like the Diamondbacks have done this season, (this was their Major League-leading 43rd of the season) the outcome of any given game is never assured. However, you can also feel a little bit more faith in the team's chances at coming back later, even, it often seems, against the toughest of pitchers. Nevertheless, though Cain's ERA against the Dbacks this season was 3.97 coming in, he'd owned us: 4-1 in 5 starts. Through his career, those numbers were 3.45 and 10-5; decent numbers, especially for a guy who's had notorious trouble earning wins.

The Giants, however, never really got anything going. Despite allowing 5 hits over the first 4 innings, Saunders gave up nothing, utilizing such crafty lefty tools of the trade as a pitch out/caught stealing and double play. Meanwhile, for the Diamondbacks, the Toronto Blue Jays transplants were the only ones having any luck against Cain. Aaron Hill tripled and doubled and John McDonald singled, but no runs were scored.

Orlando Cabrera homered to lead off the 5th, though. Leading off the 6th, singles from Brandon Belt and Cabrera again threatened to score more runs, but Joe got another DP to get it a 1 run game. In the 7th, the Diamondbacks finally broke through. With one out, Paul Goldschmidt drew a walk, then came home on Chris Young's RBI double to tie the game -- the throw was close, but slightly behind Goldy. After Bruce Bochy oddly pinch ran Andres Torres for Brandon Belt and yet failed to score, in the 8th, a leadoff Ryan Roberts double off the glove of a diving Justin Christian preceded an intentional pass to Justin Upton, and then Bochy pulled Cain. Javier Lopez came in to face Miguel Montero, inducing a popup, but Goldschmidt laced a liner down the right field line off the nearly unhittable Sergio Romo to break the tie. It was Goldschmidt's first career triple, though he was certainly aided by the lead feet of CarLOL Beltran, who then watched it carom by, not used to playing at Chase Field, apparently.

David Hernandez, who'd pitched a scoreless 8th despite the Belt single, was the beneficiary of the late lead, getting the win after JJ Putz pitched around a 9th inning single. Once Aubrey Huff's popup fell into the glove of Chris Young, the team began to celebrate -- but details for that are elsewhere.

In case you're wondering, Paul Goldschmidt is now hitting the Giants at an .887 OPS. 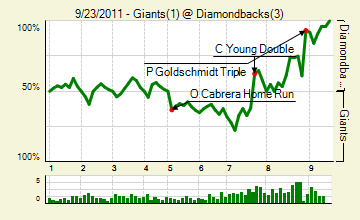 via www.fangraphs.com
Master of the Universe: Paul Goldschmidt, +33.8%

Only slightly less awesome: The rest of your 2011 Arizona Diamondbacks

Not awesome in the least: Our SB Nation overlords, who allowed the Snakepit
to intermittently go down in the midst of this joyous occasion; -834.7%

Though Jim suggested an inadvertently racy comment within the Gameday Thread, Comment of the Day actually goes to Clefo, for this text message he sent me from Chase right after the final out:

I trust no explanation is required.

So, Ian Kennedy pitches tomorrow against rookie Eric Surkamp in a now meaningless very important game for your 2011 National League West champion Arizona Diamondbacks; we're still only a game behind the Milwaukee Brewers for home field advantage in the postseason.