Share All sharing options for: Diamondbacks 8, Pirates 5: Almost There

For a DBacks fan, this game had everything- home runs, timely hitting, double steals- and that was just in the first inning. The DBacks offense didn't bother waiting until the late innings to show up this time, battering former DBacks prospect Russ Ohlendorf early on. But would the pitching, obviously unfamiliar with this role of having an early lead, hold up?

Our fun started in the bottom of the first. After a Willie Bloomquist single and a bunt single from Aaron Hill, the DBacks decided to show off some of that vaunted aggressiveness on the base paths early on, putting the double steal in motion. It paid off, too, as Justin Upton hit a sacrifice fly to bring in Bloomquist to give us an early lead. Miguel Montero then followed that up with a long home run to right field to put the DBacks up 3-0. We threatened to add on- a Lyle Overbay double, a Chris Young walk, and another double steal gave us runners on second and third with one out, but it wasn't to be.

Wade Miley headed back out to the mound in the second with the lead, and quickly let the Pirates chip away at it a bit. Fortunately, nothing too catastrophic, merely a solo home run to Ryan Ludwick, who seems to be glaring at me as I check his Yahoo page for his stats. Still, Miley didn't let it shake him up too much. He got his next two batters and then went through the Pirates 1-2-3 in the third. Then in the bottom of the third, the DBacks offense woke up again.

It was the usual suspects- singles by J-Up and Montero let Chris Young knock in a run, and then a walk to Lyle Overbay loaded up the bases. Okay, mostly the usual suspects, I guess. That was the end of Russ Ohlendorf's day, and I suspect he won't spend the evening fondly recalling his time in the DBacks organization, nor will he be fond of Jared Hughes, who replaced him. Hughes quickly gave up a double to Ryan Roberts to allow two more runs, and then- after a one out, four pitch walk to Wade Miley- gave up a two out double to Aaron Hill to bring the score to 8-1. Overall, Ohlendorf's line on the day was two innings, seven earned runs, and only one strike out. Not going to do it.

The Pirates immediately started to try to fight back against the Diamondbacks. Andrew McCutchen started off the fourth with a double, and then scored on a Derrek Lee single. They tried to add on that inning, putting runners on second and third with two outs, but Miley got a timely swinging K to end the inning and keep the DBacks lead at 8-2.

At this point, unfortunately, though, the DBacks bats apparently decided they'd done enough work, and it was time for a bit of an afternoon siesta. We managed a single hit in the fourth and fifth innings each, but other than that, they didn't make much noise at all. There were a few nice plays by the Pirates defense to rob the DBacks batters, but we had to watch- er, listen- to our team go down 1-2-3 for the last few innings of the game.

So, a six run lead, five innings to go? Could the Diamondbacks hold on to it? Wade Miley made it through five innings before handing the ball over to Micah Owings. Not a bad outing for Miley- five innings, two earned runs, five hits and only one walk. Surely we can make it through this easily, right?

Unfortunately, the solid bullpen we've come to rely on this year- weird, huh?- wasn't quite as good as we might have hoped. Micah came in and gave up a solo home run to Derrek Lee in the sixth. Bryan Shaw came in for the seventh and gave up a leadoff ground rule double to Josh Harrison, who advanced on a ground out and scored on a wild pitch that was, according to the radio team, nowhere near being catchable for Miggy. Brad Ziegler took the mound in the eighth inning and gave up singles to Lee and Pedro Alvarez before allowing a two out double to Jason Jaramillo to make the score 8-5. Joe Paterson got the last out of the ninth, but all of the sudden, some wobbly relief pitching had taken us from a blow-out to a potential save situation.

But J.J. Putz eats save situations for breakfast. Or something. After another inning of ineffective offense, J.J. came in and took care of business- three Ks, all swinging, and the Pirates were done. J.J. picked up save #43, Wade Miley earned his fourth major league W, and the Diamondbacks won another series. 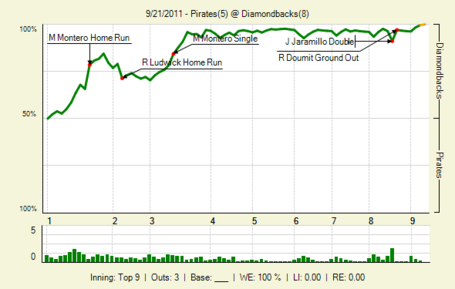 As so often happens, the graph doesn't quite embrace that feeling of wary concern that we were left with during the game, but, hey, a win is a win. Good thread for a Wednesday afternoon without the game on TV. imstillhungry95 again led the comments, only poster in triple digits, with hotclaws and AZDBACKR as the only others over 50. Also stopping in to comment were Backin'the'Backs, txzona, Bcawz, TRTFSHR, Jim McLennan, Stile4aly, GuruB, sonic barracuda, Dan Strittmatter, piratedan7, 4 Corners Fan, dbacks4life, blank_38, justin1985, kishi, Clefo, mrssoco, TwinnerA, DivineWolfwood, Frank Squishy, dbacksfann, snakecharmer, Gildo, Amit, rfffr, Husk, since_98, NASCARbernet, golfmanthee, The so-called Beautiful, and Zavada's Moustache.

No comment went green today, but I'm going to give comment of the day to TRTFSHR for this prophetic note before the game started:

Offense
will break out today. I see 8 runs for our boys. Just hope Miley can keep the Buccos number down.
by TRTFSHR

My email address is in my profile if you have any thoughts on the lottery numbers.

So, we cut the number down one more. The Giants play in LA tonight and tomorrow, so it isn't impossible that we might clinch without having to play another game. I don't know about you, but.... I kinda hope that doesn't happen. I want our team to have their chance to celebrate in front of their home crowd when they win it. And a Giants win tonight and/or tomorrow means that a DBacks win this weekend gives us the division crown. At home. In front of the team we're dethroning. How great would that be?