Record: 89-66. Pace: 93-69. Change on last season: +26. Magic number: 3
If stranding runners was a good thing then we just witnessed the baseball equivalent of winning a free Bugatti Veyron. The Pirates stranded twelve runners and the D-backs nearly matched that as they stranded eleven. It was a terribly sloppy game for all parties, what with the combined 23 stranded runners, two errors, two picked off runners, and a HBP and wild pitch sprinkled on top just for added discomfort. I was hoping that both teams would conjure up some sort of agreement and restart the game. No luck, and the D-backs lost.

Well, at least the Diamondbacks played better than my softball team did tonight. The Phoenix Red Rockets lost game one thanks to the mercy rule (20-0) and lost in the second game as well (19-8). My gift upon coming home was a frozen pizza and the reward of recapping an apparently not-so-majestic loss by the D-backs. Damn. That being said, sorry if this recap doesn't meet your high standards.

Dan Hudson wasn't the only one with an unforgettable game, but he helped jump start the frustration train by allowing back-to-back doubles to the first two batters he faced. He then followed up his first inning performance by allowing a bomb of a home run to Pedro Alvarez in the second inning. Two innings - two runs for Pittsburgh.

Aaron Hill and Miguel Montero tried to do their thing in the bottom of the first with a double and walk respectively but were eventually stranded. For the most part, I could end the recap now with... "and then that happened over and over again until the game ended" but I'll try to make it slightly more interesting.

The score remained at 2-0 heading into the 5th inning as both teams traded punches at not scoring any runs. Both teams had stranded more than four runners and the D-backs squandered away a bases loaded chance as Hudson grounded out on the first pitch of his at-bat. After ending the scoring chance, Hudson promptly served one up to Pittsburgh allowing another double, this one off of the hands of Ryan "can't hit" Doumit.

I'm not going to sugarcoat things, fast-forward to the 8th inning, Derrek Lee sunk the final dagger with a two-run homer which would end up being the winning run(s). Did I mention he hit it off of David Hernandez? Yeah, Hernandez had another uncharacteristically forgettable outing (insert Dan or bluebulldog quote). The D-backs had a 5-1 deficit to erase with only six outs left but they managed to make it interesting. Ryan Roberts plated Chris Young on a single and eventually scored off of a Pedro Alvarez throwing error. Unfortunately, they still needed two more runs in the bottom of the ninth and Joel Hanrrahaharhrn took care of business going 1-2-3 against Upton, Montero, and Goldschmidt without a hiccup.

They never had a chance... 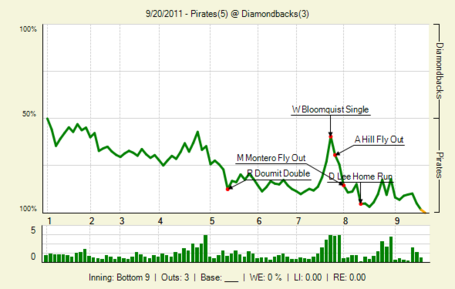 The GDT survived a rather rugged game to the tune of 1K+ comments yet again. Here's the full breakdown:

Comment of the night goes to no one because it's 1:00 AM, there's no green comments, and I'm too lazy to make any attempt at finding one. Tough luck, everyone.

The D-backs have lost four of their last six but still hold a healthy lead over the Giants. We'll turn to Wade Miley tomorrow and the TVs will turn to no one as it's a radio game only.