We have quite a few active Tweeters on the 'Pit, as you already know, and if you aren't already doing so, you should also be following us there [@AZSnakePit], to keep abreast of stories as they're posted and random bits of trivia that fit inside the 140-character limit [though admittedly, very little I say ever fits in 140 characters!]. I can't claim to be particularly cutting-edge, so it was a pleasant surprise to be invited to take part in the first Diamondbacks Tweet-Up at Chase Field last night. Details and more pics after the jump.

It's not the first such event held by a major-league team - the Tigers, Rays and Braves held similar get-together earlier in the year, and the Red Sox are already on their second year. The D-backs had made social media, and in particular, Twitter, a focus of their marketing efforts, this year: there's not just a team feed, but president Derrick Hall has his own stream, as do many of the media, such as Steve Gilbert, Jack Magruder, Todd Walsh - see our previous piece for a full list of those. All those listed were part of the panel of "local sports personalities" who took part in the panel discussion at the center of the evening's events.

I use quotes, since somehow, I ended up on the panel, repping the fans along with Jeff Summers from Diary of a Die-Hard, who was equally surprised to be invited. I will now be adding "Local sports personality" to my resume, and getting T-shirts made, though my efforts earlier in the day to explain the event to my mother probably didn't prove too effective [In hindsight, I should probably have started, "The Internet is a series of tubes..."] Before the panel, I got to sit in on Kirk Gibson's pre-game press conference, where he talked about Jarrod Parker's promotion; didn't quite get up the courage to ask a question there. 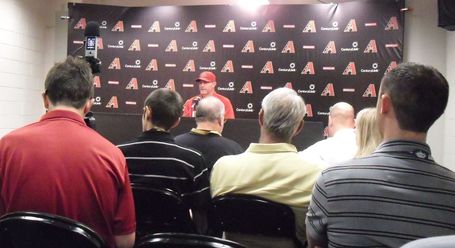 After that, wandered up to the Diamond Level where the event was taking place. Even if you didn't use Twitter, the event was a great value (and I talked to at least one attendee who had no real idea what Twitter was!) - as well as the panel, you got a T-shirt commemorating the event, a Fox Sports Arizona fan (batteries included!), assorted other goodies, and a great seat in Section 206, for less than half the price the seat along would normally cost you. As a special bonus, the D-backs added $15 in D-bucks to each ticket, which could be used for food, beverages or stuff from the team shop.

Also stopping by during the early part was pitcher Brad Ziegler, who was actually attending his second Tweet-up of the season, having been part of the Oakland one back in July. He described how he actually first heard about his trade to Arizona on Twitter, before Billy Beane called him into his office to tell him officially. The general consensus of the panel was that Twitter has changed the whole landscape, especially around the trade deadline, and that it's probably inevitable, at some point, that MLB comes in and imposes tighter restrictions in this area. Though how they will enforce those on journalists might be interesting. 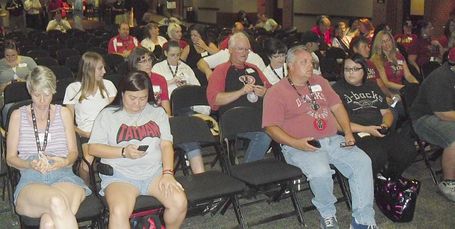 Derrick Hall told his own cautionary tale of the media, which resulted from his Twitter comments after Justin Upton was ejected against the Giants. He wrote, "Umpires need to realize they are NOT the center of attention. Tossing a MVP candidate in a pennant race for a call YOU blew is bush!" That resulted in a phone-call from Commissioner Bud Selig the next day to discuss the matter... No official word on whether Hall was also whacked in his pocket-book for the comments, in the same way Mark Cuban has been!

The discussion was wide-ranging, including a mass Tweet of birthday wishes to Ryan Roberts, and covered both positive and negative aspects: it helps create a sense of community, and helps remind fans the players are people too, but Todd Walsh has some horror stories from the hockey world, and the venom he received through Twitter over the Coyotes' non-relocation to Canada. More general questions from the crowd were also addressed: Hall revealed that not only will a throwback jersey weekend be taking place again next season, he is also looking in to developing an alternate uniform that will include purple and/or turquoise in the color scheme.

After the event finished, there was still an hour or so before first pitch, so most of the panel and attendees decamped to the Arizona Baseball Club - it's the one in right field, and probably counts as one of the hidden gems of Chase Field. I had been there once before, but that must have been seven or eight years ago, and at that time, you needed a premium ticket to get in there. Now it's open to all fans, and is a nice, up-scale location for a pre-game drink. They also have a carvery buffet, which at $35 is really not much more expensive than the All You Can Eat seats, and offers rather better food than hot-dogs and nachos! Think we might be back to try that out...

Oh, and they have Blue Moon on tap, so no prizes for guessing where my $15 went. :-) It was a pleasant hour, trading stories of World Series past and, hopefully, future, with other fans, and emphasized what the "social" aspect of "social media" is all about. Tweeting is nice, certainly, but - and Jeff Summers pointed this out during the discussion - few things are more fun than getting down to the park and enjoying the game with like-minded people. The roof was open, for what I think was the first time since spring, and Ian Kennedy won his 20th game. It really doesn't get much better than that. Look forward to #DbacksTweetup 2.0. 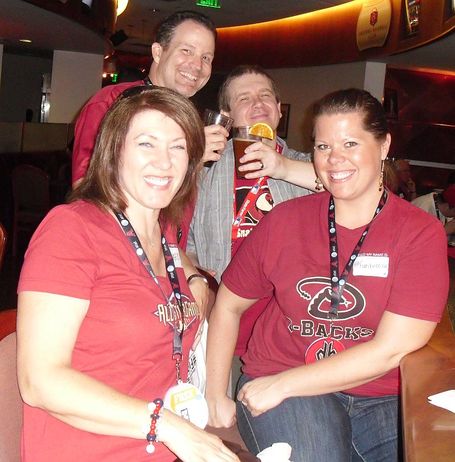