Ian Kennedy may not get the Cy Young recognition he deserves, with pitchers in bigger markets and less hitter-friendly parks likely further up voter's ballots. But if you saw him pitch tonight, it would be hard to deny his credentials, as he held the Pirates to one hit over eight innings - and that by the opposing starter, who came in to the game batting a career .078. Kennedy tied a career high with 12 strikeouts and struck out the last six batters faced, fanning Pittsburgh in order in both the seventh and eighth innings. Meanwhile, Justin Upton provided all the offense necessary, homering to left-field while breaking his bat.

He was almost impeccable this evening. Even though it was one inning shorter, the Game Score from tonight's contest still tied his outing against the Phillies on April 25, as the most dominant by a Diamondbacks' pitcher since Randy Johnson's perfect game in 2004. Kennedy faced two batters over the minimum: opposing pitcher Jeff Karstens singled on an 0-1 pitch with two outs in the third, and Andrew McCutchen walked with one out in the next inning - the latter stole second (Miggy should probably have had him, but the throw sailed high), and was stranded there. IPK retired the last fourteen batters faced, nine by strikeout.

That included six consecutive K's to finish Kennedy's night, three looking and three swinging. I guess he'll carry that streak on to Saturday, and might have a shot at what seems to be the Arizona record - no prizes for guessing that was the Big Unit, who struck out seven during his 20-K demolition job on the Reds in May 2001. He had reached 113 pitches by that point, so it probably made sense for Kirk Gibson to go to the bullpen; might have been interesting if Karstens hadn't broken up the perfecto in the third. Given the narrow lead and importance of the game, would Kennedy have been allow to try for the no-hitter?

Instead, it was J.J. Putz for the ninth, and after easily retiring the first batter, the only truly hard-hit ball of the night split Chris Young and Justin Upton in right-center, allowing the speedy Alex Presley to make it all the way to third with one out, and put Kennedy's #20 into serious doubt. The infield came in, and Putz did the needful, by getting the next batter to ground sharply out to Paul Goldschmidt at first-base, too hard for the runner to risk it, though Paul's bobble of the ball before getting the out at first caused major palpitations in the 25,000 or so in attendance. Putz got the third out with a K, to the relief of all.

The offense wasn't exactly on fire. Upton had a couple of hits, and Goldschmidt doubled with one out in the fourth, but Arizona had only five hits and went hitless with runners in scoring position, though they only had four at-bats in that scenario. However, leading off the sixth inning, Upton had his bat broken by the pitch, and was left holding something better suited for spearing a canape, but still managed to muscle it out of the infield... And it kept going, and going, out of the outfield as well, over the warning track and being snagged by a fan in the front row, over the despairing lunge of the Pirate fielder.

There were some nervous moments at Chase, as Pittsburgh argued fan interference, and the umpires left the field to review the video footage - something we at the park were not able to do. Having now watched the replays, it was a close decision, and one that could have gone either way. The fan in question was certainly not behind the yellow line, but the ruling appears to be that the hitter is called out "If the umpire judges that the fielder could have caught the ball over the field i.e., the ball would have not crossed over the plane of the wall." In this case, it seems the outfielder would have needed to cross that plane, so the home-run stood.

Good job too, as that single run was all she wrote, with the closest we came to adding on being Aaron Hill's fly-out to the base of the wall in left, in the bottom of the eighth. However, it was enough, and Arizona held on for the first 1-0 victory they've had at Chase in over three years, and only sixth in franchise history. The last one was in June 2008, and was won by the Diamondbacks on a Chad Tracy walk-off homer, in the bottom of the tenth inning. Curiously, judging by my notes on the recap, I was also at that game as well, with shoewizard. 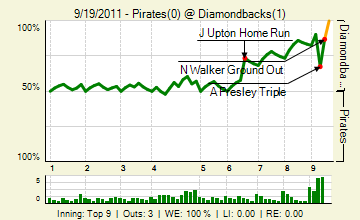 Stile4aly on fire this evening, getting the only two green comments. For fairly obvious reasons, I'm going with the second one as Comment of the Thread. I'll leave you with it, and will be back tomorrow with TweetUp reportage!

Ian Kennedy is out there. He can’t be reasoned with, he can’t be bargained with…he doesn’t feel pity of remorse or fear… and he absolutely will not stop. Ever. Until you are dead.