Share All sharing options for: Diamondbacks 1, Padres 3: Pulling a Padres at Petco

Hmm. My initial thought heading into this game was that we had a solid chance, mostly because a) we played the Padres, b) the games are becoming increasingly important with each Arizona loss and San Francisco win, and c) we played the Padres. In my mind, the only thing to really worry about was whether or not the awesome Josh Collmenter would show up. Turns out I should have been more concerned with whether or not the offense paid a visit to Petco tonight, as the answer became readily apparent. Wade LeBlanc, he of the 5+ ERA, held Arizona's offense to just a single run and four hits over six innings. The only run was a one-out solo shot from Aaron Hill (which, granted, was nice to see) in the first inning. Taking that into consideration, LeBlanc threw nearly six shutout innings against us throughout the rest of his night. This... should definitely not become a thing. Neither should the losing. San Francisco and Milwaukee won today, by the way. Hit the jump for a more expanded version of the sadness.

As I said in the intro, I was interested in seeing which Josh Collmenter we'd get to see today - would it be the one that somehow shuts down offenses on a semi-consistent basis, or would it be the one that gets lit up from time to time? Suffice to say, the fact that he was pitching against San Diego in Petco Park was enough. He was certainly effective: Collmenter went seven strong, surrendering eight hits and three runs with two strikeouts and no walks. I asked for a tl;dr from the fellow 'Pitters in the GDT, and from what I gathered, the Padres got a whole lot "I-mean-I-guess-that's-a-hit"...s. One of San Diego's runs came from an O-Dawg "single to shallow center" that preceded the RBI "single to shallow center" from Andy Parrino. How about Nick Hundley's "single to shallow right" in the fourth or LeBlanc's "single to shallow center" in the fifth? I mean, sure, shallowness is relative, but it's tough to let a team beat you with a whole bunch. Orlando Hudson and Jeremy Hermida both launched homers (the latter of which was a no-doubter in the seventh), but past that, the Padres got on base a whole lot without packing much power.

Actually, that's more than you can say for the Diamondbacks. Even when they did get on base, as always, the offense found a way to make their outs on the basepaths. Ryan Roberts was caught trying to swipe second and Justin Upton was caught napping at first for the token "outs-on-the-basepaths" for tonight's contest. The game becomes pretty difficult when your team not only has to fight to get men on base (as all teams do), but keeping them there. If we had trouble "solving" LeBlanc, I can't help but feel that it would have made a little more sense to have played it safe. You can make the argument that it makes more sense to have taken those risks because the offense wouldn't have been able to score the runners, but it's pretty clear what resulted from those risks we took. A third consecutive loss and two in a row to the Padres. The cellar-dwelling Padres. Le sigh. I wish there were more to write about this offense, but there needs to be a semblance of consistency before it's playoff caliber. Maybe I'm overreacting after a frustrating loss (also, I hate getting colds), but my optimism has faltered over the last week.

It's worth noting, by the way, that the game was lost in a seriously bu-, erm, "lame" manner. ZOMGAWESOME Heath Bell relieved Qualls to close out the game, and after Justin struck out to start the inning and Montero followed up with a fly-out, the offense provided one last flicker of hope. Paul Goldschmidt singled one up the middle (narrowly avoiding the glove of a diving Orlando Hudson) and Chris Young accepted his third four-pitch walk on the night. Lyle Overbay, the hero of last Saturday's game (off of Heath Bell, no less), was called in to pitch hit for Ryan Roberts. The home plate umpire, Fieldin Culbreth, wanting to get his name up there among umpires to prematurely end a game,  called strike three on what was clearly a ball to ring up Lyle Overbay and end the game at a score of 3-1. I don't know what happened to the fourth pitch, but observe the following: 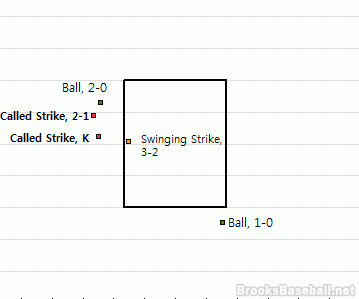 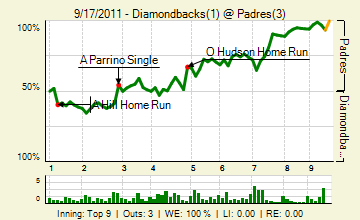 The GDT was about as popular as expected for a Saturday night, as pulled in just over six hundred comments in total at time of writing. Once again, imstillhungry95 led the way, having over twice as many comments as Muu in second place. All involved tonight were Jim McLennan, BulldogsNotZags, CaptainCanuck, Stile4aly, mrssoco, hotclaws, asteroid, 4 Corners Fan, azshadowwalker, Husk, Backin'the'Backs, shoewizard, snakecharmer, NASCARbernet, dbacks25, Clefo, kishi, Brian MacKinney, Sprankton, and marionette. Comment of the Night goes to Jim, referring to Miggy and his awesome ownage of baserunners:

The Miggymatic is gunning them down nicely, since Agent Blanco calibrated the sights correctly…

As Jim noted in SnakeSounds, CoolStandings still has us at 96% odds of winning the division. We're in a much better position than San Francisco is, and our magic number sits firmly at six. Just six positive outcomes away from an NL West title... meanwhile, San Francisco's won seven in a row, but we're in the driver's seat and sit a few games away from awesomeness. Let's just do our thing and see what happens.