Unfortunately, Arizona's still got a ways to go, and their offense deserted them tonight in Petco Park, as offenses are wont to do. Not even the third-time-through-the-order magic showed up tonight. Wade Miley struggled early but got no run support, Tim Stauffer pitched really well into the seventh inning, and the Diamondbacks were shut out by the Padres.

San Diego gave Diamondbacks fans #5-starter-induced ennui early in the ballgame. Jason Bartlett singled to right field, then advanced to second on a pitch that was juuuuuuuust a bit high. (See visual evidence.) The wild pitch cost Wade Miley a run when Bartlett came in to score on Jesus Guzman's single to left. Guzman then scored on a double by Nick Hundley that Gerardo Parra bobbled. Guzman had stopped at third base, and only raced home when he saw Parra's error. The Padres had a 2-0 lead by the end of the first inning, and those was all the runs they'd get. Unfortunately, it was also the only two runs they'd need.

The Padres tried to add on in the second, but Miley worked out of quite a jam. Orlando Hudson walked and stole second, then James Darnell got an infield single. The pitcher Tim Stauffer sacrificed both runners to second and third with one out. When Cameron Maybin hit a ground ball to Ryan Roberts, RyRo and Miguel Montero executed the rundown of O-Dawg perfectly, and Hudson became the second out. Miley then walked Jason Bartlett to load the bases and raise our collective blood pressure, but Guzman ground out to shortstop and Miley got out of it without a run crossing the plate.

However, after those first two innings, Wade Miley had a great outing. He allowed one walk (in the 4th, then induced a 1-6-3 ground-ball double play) and one hit (in the 5th) in innings three through six. His pitch count was at 52 pitches after the first two innings, and 96 total after six. His final line of 6IP/5H/2R/3BB isn't all together terrible and it's about what a team should expect out of a #5 starter. All he needed now was some run support.

But the Diamondbacks offense... well, it forgot to show up tonight. Arizona had two singles through the first four innings. The offensive highlight of the night was part double, part Orlando Hudson mental error in the 5th inning. Chris Young hit a single over the mound and up the middle that Hudson dove for behind second base. It was a great move that kept it from going into center field, though it would've been a single anyway based on Young's speed. But Orlando Hudson forgot he's no longer on the Diamondbacks payroll, and he decided he wanted to try to make a throw to first. Well, when he went to reach for the ball, it popped up out of his glove and rolled towards left field about 10-15 feet away. Orlando was so devastated by this non-play that he.. well, he just laid there on the ground, annoyed at himself.. and he kind of forgot to go get the ball. So while O-Dawg lay in center field doing nothing, Chris Young kept running and scampered into second base. So there's your "leadoff double to shallow center field" for you. Except on the very next play, Lyle Overbay hit a grounder that got CY caught in a rundown between second and third, and then on the play after that, Ryan Roberts grounded into an inning-ending double play. Rally denied.

Arizona had another chance for a rally in the 7th inning. Justin Upton singled to third that had James Darnell on the ground with a shoulder injury. Two batters (and two outs) later, Tim Stauffer left the game with tightness in his arm. Since we were now going through the batting order a third time, it's time for the offense to show up, especially now that Stauffer left, right? Chris Young did his part by singling off of reliever Anthony Bass, but Overbay grounded out to strand both runners.

Bryan Shaw and Brad Ziegler each threw a scoreless inning of work in the 7th and 8th, respectively. Unfortunately, Chad Qualls (8th) and Heath Bell (9th) did the same for the Padres. And so for only the fourth time this season, the Arizona Diamondbacks were shut out. 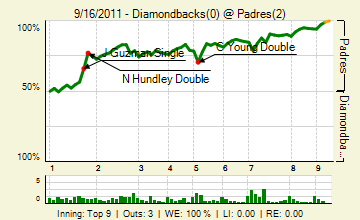 It was a fairly quiet gameday thread, 750 comments but only 20 people came and hung out with us on this fine Friday evening. imstillhungry led the way as always (he is definitely the new 'Skins) with freeland also over the century mark. All present were NASCARbernet, imstillhungry95, blue bulldog, Clefo, snakecharmer, Jim McLennan, asteroid, Rockkstarr12, txzona, 4 Corners Fan, piratedan7, freeland1787, Stile4aly, Muu, Husk, hotclaws, since_98, Bryn21, shoewizard, and brian custer.

I am going to pull a soco and not award a Comment of the Day. Nothing was even rec'd more than once! Le sigh.

So the Diamondbacks drop the series opener to the Padres. Unfortunately, the Brewers and Giants both won tonight, so not only do we lose ground on home field advantage, we lose a game on our division lead and don't reduce our magic number at all. I know a six game lead with 11 games to play isn't a reason to find the panic button just yet, but the Giants are hot, and they need to cool down before they head into Chase Field next weekend.

Despite what your pocket calendars may say, tomorrow's matchup is on Fox Sports Arizona. Tune in tomorrow evening to watch Josh Collmenter take on Wade LeBlanc.