Book Review: The Art of Fielding

Share All sharing options for: Book Review: The Art of Fielding 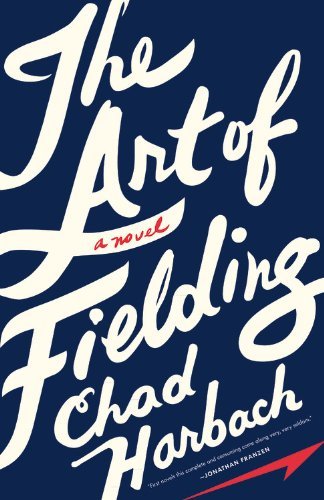 The Art of Fielding by Chad Harbach is the novel that seems to have all the right pieces, appeals to an obsessive non-niche audience, and yet fails to ultimately be anything more than a quick read. It features a generic sports movie plot, paper thin characters with odd motivations, and does not necessarily show a high level of writing craft.

If it seems like I'm unfairly ripping the book, well perhaps I am. I wanted desperately to like the book. I love reading, novels in particular, and I love baseball. This should be a perfect match. But Fielding was ultimately undone by various errors that culminated in the equivalent of a .500 season when a team should be in the playoffs. Not really that bad, but you're disappointed for what could have been.

The Art of Fielding concerns itself with a small, fictional Division III college baseball program. The lead character, Henry, is recruited to play at the school because of his particular defense prowess. He is mentored by Mike, another player apparently straight from central casting for gruff but lovable working class stiffs. Henry, Mike, and the whole Harpooners gang aren't a particularly good baseball team, at least not until the last half of the book, but the competition is deemphasized in favor of education. It's a refreshing view, but unfortunately it seemingly applies to everyone but Henry.

The first real flaw of Fielding is the lack of characterization. Henry likes baseball. He's good at baseball. I could probably tell you a hundred facts about Henry (his favorite team is the Cardinals). But humans are not a collection of trivia. The character Henry seemingly has no greater motivation than to play baseball. You might, at this point, think I'm being unfair. What about The Natural, you ask. Well, the Natural certainly had a main character obsessed with being the best in baseball. But he was also a wonderfully complex character that seethed with rage and injustice. Henry seems unable to be motivated by anything but another rote section on working out.

Chad Harbach uses multiple point-of-views in Fielding, so Henry's inability to be a full character might be forgiveable if he was the only one. Alas, many of the other characters, though marginally fleshed out, are almost as equally flat. Owen, roommate of Henry and another Harpooner, is gay. That's about it for poor Owen, even as he is a major character whose actions propel many of the major plot points in the book. Owen might be motivated or inspired by certain things, and I would never know. But he is gay, gay, gay.

There are other main characters, such as the Dean of the school, or Mike, Henry's mentor, or Pella, the Dean's wandering daughter. They each get long sections from their point-of-view, and things kind of hum along with a screwball sense of misunderstanding. That might sound like a complaint, but I assure you its not. Especially given some of the heavy handedness toward the end, the middle sections were a nice contrast. Unfortunately all of these characters act in a near random fashion. Pella seems to be especially erratic, acting and thinking things that make me wonder if she is just a representation of what Harbach wishes a woman was like.

Thin characterization aside, the plot left something to be desired. The overarching plot is fairly generic: unknown player develops into a great player (and possible first round draft pick) just as his team goes from unknown to contenders. The drama largely comes from Henry, the rising stock, going through a gargantuan slump to point of being unable to play. That's not a spoiler, it's introduced within the first third and is the main source of conflict for the rest of the novel.

There are other subplots I could waste your time trying to wrap my head around, but assuming you still want to read the book I won't spoil you. These side plots never feel authentic, largely due to the characterization. Why do any of the characters do anything they end up doing? Well, they must have read Harbach's outline.

The writing itself is not particularly well crafted. Sub-par writing can be ignored with great characters or story, but Harbach's writing cribs more from airport fiction than n+1, the literary journal he edits. At one point while reading I came across 1 page chapters. Maybe that works for James Patterson, but Harbach should think about maybe combining scenes into larger chapters to eliminate the young reader's feel. Stylistically speaking, well, the book has none, and I hope never to read an account of someone farting while running up stadium steps.

It's hard to be particularly picky when it comes to baseball novels. While nonfiction titles come out waves, including repetitious biographies and "change the way you look at the game" books, fiction is routinely ignored. It makes sense, to a degree; men generally choose nonfiction if given the choice, and since most sports are targeted at men it would be smart to package in a way that would make the book most likely to be bought. As such there are precious few truly worthy baseball novels: The Natural, or The Southpaw. Pafko at the Wall, which would later become the first chapter of Underworld.

The Art of Fielding, I am unfortunate to report, does not reach the same level as these other books. It seems unlikely it will enter the pantheon of great baseball novels, but the limited selection might help its cause.