Diamondbacks 2, Dodgers 3. A Fine Day for the Human Element

Share All sharing options for: Diamondbacks 2, Dodgers 3. A Fine Day for the Human Element

This one promised to be a good pitching duel from the start, with Dodgers ace Clayton Kershaw going up against Arizona's Daniel Hudson as the D-backs went for a three-game sweep of L.A..  Arizona certainly had reason to be confident going into this one, as they had tagged Kershaw for four runs in each of the last two times they went up against the southpaw.  The bad news for the D-backs: Kershaw dominated the Arizona bats.  The good news for the D-backs: Kershaw failed to record an out in the sixth inning.  Details on what went down after the jump.

Things got ugly quick for the D-backs, as the Dodgers took a 2-0 lead in the bottom of the first inning off of Hudson, though it arguably would have been one run worse had Don Mattingly not over-managed the L.A. club.  Dee Gordon and Tony Gwynn led off the game with back-to-back singles, but Gordon was gunned down by Miguel Montero at third on a double steal attempt.  Maybe it's just me, but I can't really understand why the Dodgers were so anxious to double steal when their best power hitter, Matt Kemp, was at the plate.

Needless to say, Kemp subsequently singled and helped make Dodger manager Don Mattingly look foolish - something that Mattingly really doesn't need help with - and advanced to second on the throw.  The following groundout by James Loney - just James Loney doing what James Loney does - thus failed to score the baserunner that Mattingly took away, although it did move Kemp up to third.  Aaron Miles then walked to set up another RBI single, this time from Jerry Sands to bring in Kemp.  A Rod Barajas groundout finally ended the inning.

Unfortunately, the D-backs' suffering hardly ended there.  Kershaw was dealing, giving up just a single baserunner through five on a double from Gerardo Parra - the lefty Parra whacking a double against perhaps the NL's premier lefty, who knew? - and fanning five.  Then came the top of the sixth inning, and it seemed that all hell broke loose.  After screaming "you'll find out" across the field from L.A.'s dugout at Parra following the home run pimping incident in Tuesday's game, Kershaw proceeded to hit Parra to lead off the top of the sixth inning.  Here is a short list of what I believe are facts about the incident:

- Kershaw made it seem awfully apparent last night that he had intentions to do something to Parra.  We don't know if that something was to hit him, if Kershaw simply planned to try to brush him back, or if it was all talk, but there was plenty of reason to be suspicious.

- Kershaw hit Parra on the elbow, hardly the location one thinks of when imagining where to hit a batter out of retaliation.

- There was no public announcement of a pre-game warning not to hit anybody.  However...

- These two tweets (link) (link) from Steve Gilbert seem to suggest that, at the very least, Hudson and D-backs GM Kevin Towers were aware of the ramifications (ejection & suspension) of hitting a batter in this game after yesterday's incidents.  This tweet (link) from Nick Piecoro seems to suggest that Kirk Gibson was not aware of any warning.

- For those who think it matters at all, Kershaw is in the midst of a Cy Young race, and losing a start to a suspension could hurt his chances.

- The rules on premeditated hit-by-pitches are far more stringent than those for incidental HBP's.

I don't know if this ought to add up to a suspension or not, because I wasn't watching the game live as it happened and MLB has conveniently not put up the highlight of the ejection on the web.  There are even more details that have come out since the game ended, but frankly, this is supposed to be a recap of a baseball game, and I'm not going to be able to form an accurate, objective opinion without having all the facts.  Form your own opinions if you so choose.  All I'll say is that this call isn't the only thing that home plate umpire Bill Welke came under criticism for tonight, as he also thoroughly frustrated the GDT with a rather amorphous strike zone.  Just another day in the #HumanElement (/Twitter'd).

Back to baseball.  Amid all of the hubbub about Kershaw, it needs to be mentioned that Hudson started dealing after his rough first inning.  He finished with a rather unsightly 4:3 K:BB ratio on the day, but ended his night with six scoreless frames after the two runs scored int he first.  All-in-all, it was another solid outing from Hudson, who lowered his ERA on the year to a stunning 3.39.  Edwin Jackson and Kenny Williams: the gifts that keep on giving.  Meanwhile, Kershaw was replaced by Josh Lindblom, and despite the significant drop-off in name recognition, Lindblom was arguably even better than Kershaw.  Lindblom matched Kershaw's strikeout total of five, but took just two innings to reach it, allowing just a single hit before departing.

Things got hairy in the eighth inning.  Arizona finally got on the board against Nate Eovaldi, starting with a leadoff double from Ryan Roberts.  Parra followed Roberts with a warning-track fly that fell just a couple feet short of a home run, and still required Jerry Sands to crash into the wall in order to steal extra-bases.  It amounted to a loud out, but at least it moved Roberts up to third base.  That set up pinch-hitter Geoff Blum, who hit a blooped one over the pitcher's mound up the middle that was just slow enough to allow Roberts to score.  Willie Bloomquist grounded out to end the inning, but the D-backs were within striking distance.

Unfortunately, the Dodgers took the run right back in the bottom of the inning.  Gibson sent reliever Ryan Cook and his double-digit ERA to the mound in a one-run game, despite the fact that Arizona is still fighting Milwaukee for home field advantage in the playoffs.  Cook promptly struck out Gwynn to begin the inning, but walked Kemp and, less excusably, Loney to put Kemp in scoring position.  Miles followed up with an RBI single through the left side of the infield that restored the Dodgers' two-run cushion, chasing Cook from the game.  Brad Ziegler came in and restored order, getting a fielder's choice out at home and a popout in short right field to end the inning.

That run would haunt the D-backs as Kenley Jansen came on to close out the game in the ninth.  Aaron Hill led off the inning with a single, but Justin Upton came up to the plate and looked like he was trying to make HitTracker crash, nearly falling over once from swinging as hard as he could.  Up against someone with as dominant of stuff as Jansen's, that plan didn't work out so well, as he struck out swinging in a wholly disappointing plate appearance.  Paul Goldschmidt followed suit with his fourth strikeout of the game, capping off the second golden sombrero of his short career.

Hill took second on defensive indifference, and  came around to score on a single from Miguel Montero that brought the game back within one run.  With Collin Cowgill running for Montero, Chris Young came to the plate.  It was hardly an encouraging match-up, with Vin Scully oh-so-prophetically pointing out on MLB.tv that a strikeout pitcher was facing a strikeout hitter.  What happens when an unstoppable force meets a freely-movable object?  Chris Young strikes out is what happens.  Jansen struck out the side and just like that, the game was over. 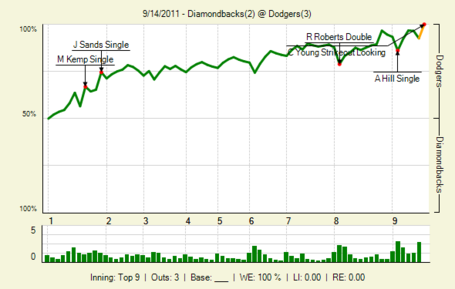 Off-day tomorrow, with Arizona beginning a three-game set in San Diego on Friday before coming home for the final nine games of the regular season.