Diamondbacks 5, Dodgers 4 - Just Walk It Out

Share All sharing options for: Diamondbacks 5, Dodgers 4 - Just Walk It Out

Another game against the Dodgers, another three and a half hour affair. Tonight's game took 3:33, but it had to go 10 innings to get there. Ian Kennedy was given an early lead, but he had a rough first inning and put the Diamondbacks in a bit of a hole. If they were to get Kennedy his 20th win and vault him into Diamondbacks history with the likes of Randy Johnson and Brandon Webb, it would have to be another come-from-behind win.

Well, one Diamondback pitcher reached a milestone tonight. Read on for the details, and to find out if it was Kennedy....

The Diamondbacks got two runs off of Chad Billingsley early. Gerardo Parra, getting another chance to hit in the lead-off spot, rewarded Manager Kirk Gibson by getting a single and then stealing second base. He was nearly stranded there as Aaron Hill and Justin Upton both popped up, but Miguel Montero picked up his teammates and drove Parra and himself in with a two-run home run to center field.

Normally a 2-0 lead would be plenty for Kennedy, but not tonight. The Dodgers tied it up in their half of the first inning. Youngsters Dee Gordon and Justin Sellers reached and were on the corners with nobody out in front of the heart of the order. Matt Kemp hit a sacrifice fly to RF to score Gordon, which was about as good of a result as one could hope for from Kemp with runners on base. Juan Rivera then popped out to second base and it looked as if the inning would soon be over with Arizona still in the lead. However, Ian Kennedy had problems getting the next several Dodger hitters out. He had no problem getting to two strikes, but the Dodgers kept fouling off pitches, and James Loney in particular laid off one that Kennedy thought was a strikeout to end the inning. (It was low, a good call by the home plate umpire, but Kennedy wanted it.) Loney ended up doubling to right field, and Sellers scored to tie the game. Then Aaron Miles singled to score Loney, and Jerry Sands doubled to bring in Miles. Catcher A.J. Ellis finally struck out to end the first inning, which was an unpleasant 34 minutes for Kennedy - five hits, four runs, and 41 pitches.

The Diamondbacks got one run back in the third inning, again courtesy of Miguel Montero. Hill very nearly hit a home run to left, it was literally inches away from going over the wall, but it went for a double. Upton hit a solid single to center field that was hit too hard to score Hill, but Montero hit a sacrifice fly to make the score 4-3. A walk by Paul Goldschmidt pushed Billingsley's pitch count to 60 after three innings.

Kennedy settled down and went 1-2-3 through the second and third innings. He allowed two baserunners in the fourth, but escaped without further damage to the score, only to his pitch count, which sat at 89 at the end of the fourth inning. The bullpen was stirring in the fifth and it was looking like that might be his last frame, but Kennedy went 1-2-3 on the Dodgers yet again, including a second beautiful strikeout of Matt Kemp. Kennedy was at 98 pitches after the fifth and stayed in to pitch the sixth. He allowed a 2-out single but finished the inning with a strikeout of Ellis. After that rough first inning, Kennedy put up five scoreless, two-hit innings of baseball to keep his team in the game. His ERA went back down to barely under three, at 2.99 according to all calculations.

In order to put Kennedy in line for his 20th win tonight, the Diamondbacks were going to have to put up two runs in the top of the seventh. Well, they got half way there. First, John McDonald popped out to shortstop on the first pitch he saw from Billingsley, which put his pitch count at 102. Never mind that Billingsley had retired 10 of the last 12 Diamondbacks he'd faced and Sean Burroughs was up to pinch hit, Mattingly pulled him out of the game for Hong-Chih Kuo. Pinch-pinch hitter Collin Cowgill struck out, but then Gerardo Parra stepped in, and the excitement happened. The first pitch from Kuo nearly hit Parra in the face (as Parra had squared around to bunt) and Parra was none too pleased with that and stared back at the mound. A few pitches later, Parra got his revenge by hitting a mammoth home run to right center field. Parra spent a good long while watching that home run and took his time trotting around the bases. When he crossed home plate, the catcher had some words to say to Parra, as did a few other Dodgers, and the Diamondbacks chirped right back. I believe there were things said about maternal relations and certain bodily functions. Clayton Kershaw in particular was quite vocal, and I expect somebody with the last name of Parra or Upton might be beaned tomorrow. It might have been tonight, but while Don Mattingly changed his pitcher again, both benches were officially warned.

Unfortunately, Parra's solo home run was all they would get in the seventh inning, and the game was tied at 4-4. Kennedy was off the hook for the loss, but nor would he get the win.

The Diamondbacks and Dodgers bullpens exchanged zeros for the next few frames. Brad Ziegler had an easy 1-2-3 seventh inning, and David Hernandez was dealing in the eighth. Kenley Jansen pitched 1 1/3 scoreless innings, and closer Javy Guerra had an easy ninth. Micah Owings came in for the bottom of the ninth and had a bit of a long inning. He allowed a walk and an infield single, but finally got Dee Gordon to fly out to Chris Young in center field to send the game to extra innings.

The Dodgers' closer Javy Guerra was sent out for his second inning of work in the top of the 10th, which was Don Mattingly's second managing mistake tonight. Gerardo Parra maintained his ownership of Dodger pitchers and singled to lead off the inning, and Aaron Hill sacrificed him to second (on, interestingly, a failed pitchout). After Upton struck out on what would have been ball three, Guerra completely lost the strike zone. He intentionally walked Miguel Montero, then unintentionally walked Paul Goldschmidt to load the bases, and then Chris Young walked on the 12th straight ball, scoring Parra and giving the Diamondbacks a 5-4 lead. (Oh, and only after that walk did anybody start throwing in the Dodgers' bullpen.) Ryan Roberts could have done some real damage, but he ground out to the third baseman.

It was then time for The Easy Button to come in and get the save. J.J. Putz struck out Sellers and Kemp, then walked pinch hitter Rod Barajas to bring up James Loney as the winning run. But James Loney took a first-pitch fastball from Putz and ground out harmlessly, a 4-3 putout. Micah Owings gets the win for pitching the scoreless ninth inning and J.J. earned his 40th save of the season. That ties a career-high for Putz, who also had 40 saves in 2007, when he was an All-Star closer with the Seattle Mariners. 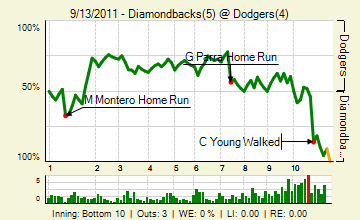 Is that
what happened to all the fans? Eaten by bleachers?

Another night game tomorrow at Chavez Ravine, or what's left of it after those 31,000 people take home their yellow seat costumes. What? You mean there weren't 31,000 people dressed as yellow chairs? They were really empty seats? But... but the numbers! They lie?!!?! And after such good performances by their team, and such good managerial decisions! Okay, sorry, I can't keep a straight face any more. Have a good night!