Share All sharing options for: Diamondbacks 7, Dodgers 2: Third Time's The Charm For Arizona

Arizona got their road-trip off to a good start in Los Angeles this evening. It took a while, but the slumbering offense awoke in a five-run sixth inning, and Joe Saunders picked up his eleventh win with seven solid innings of work. The victory reduced our magic number by one, as the Giants beat the Padres, and brought us into a tie with the idle Brewers for home-field advantage in the NLDS [we own the tie-breaker]. Gerardo Parra drove in four runs, tying a career-high, while Ryan Roberts reached three times on a hit and two walks, and Paul Goldschmidt picked up a couple of knocks.

If we've learned one thing this season as Diamondbacks fans, it's that patience is a virtue. Many are the games where the offense has seemed incapable of churning butter the first couple of times through the order, only to suddenly awaken over the final few innings. This evening was an impeccable demonstration of this at work. Ted Lilly took a no-hitter into the fifth, and the first two times the Arizona batters had faced him, they went a combined 1-for-15, and had been comprehensively shut out, getting one man past first-base. Then, the third time through the order - which, conveniently, matched the sixth inning impeccably - this is what happened:

After the Diamondbacks could do nothing of significance offensively for their first fifteen outs, that third time, they went 5-for-7 with two walks and five RBI - as well as, probably inevitably, another out on the base-paths, though this was more unlucky than incompetent. Certainly, the LA decision to remove Lilly [in the middle of an at-bat, immediately after Hill stole third] mis-fired badly for them. He had reached 100 pitches, but Bloomquist's single was a Texas leaguer, and his off-speed stuff had devastated the D-backs, who were just surviving - the one hit through the front five came in a fine 12-pitch at-bat by Ryan Roberts, where he was basically trying to stay alive.

Maybe there was some psychological warfare going on? There had been work done earlier in the game, on the pitcher's mound. But Kirk Gibson seemed to express concern about it again, and it was repaired immediately before Lilly went to work, delaying the start of the inning. Did that disturb his rhythm? Hard to say. But Ted's final line, of three earned runs over 5.1 innings, certainly looked a good deal worse that the five innings of shutout, one-hit ball that he had before they started shoveling dirt around the rubber. Mrs. SnakePit would like me to point out how Lilly looks like Karl Pilkington...

Joe Saunders, meanwhile, was putting together a very nice outing as well. The only runner in Dodger Blue he allowed past first base was MVP candidate Matt Kemp, who drilled a second-inning pitch over the fence in right-field, for his 33rd home-run of the year and 108th RBI. Otherwise, Saunders was throwing a truckload of strikes, and he didn't walk anyone until the lead-off batter in the seventh inning. That man did come around to score, but Saunders escaped further damaged, exiting with a line of four hits, one walk and four strikeouts, with a solid two runs allowed in seven frames.

That kept the team in the game long enough for the offense to show up late, like most of the fans in Dodger Sta... Oh, my mistake: it seems they just aren't showing up at all these days. I don't think I've ever seen Chavez Ravine so empty as it was this evening - the official crowd was announced as 30,616. but the LA Times was taking close to twenty thousand off reported attendance last week, estimating the actual number present at a game as "maybe 8,000." Certainly, ten thousand would feel closer to the sparse crowd present tonight. I'd roll out the old joke - "Get away from it all. Come to a Dodgers game" - but it would feel like kicking a puppy.

After Saunders left, the bullpen didn't have too much trouble in the eighth, with Bryan Shaw blowing away Kemp on three particularly impressive pitches. However, the the ninth inning did prove tricky, and took just about forever, after Shaw got the first two batters easily enough. He had two attempts to get the final out, gave up a couple of soft hits, was replaced by Alberto Castillo, who got a two-strike count on only batter he faced, then hit him. This made it a save situation. Enter J.J. Putz, who picked up his 39th save by retiring one hitter. That's the second-most by a D-backs closer ever, trailing only Papa Grande's 47 in 2007.

The game ground to its eventual conclusion in three hours and 31 minutes, tied for the fifth-longest regulation game in 2011. Must be something about the Dodgers, as of the six Diamondbacks games this season to have gone nine innings and taken 3 1/2 hours or more, four have been against Los Angeles. Fortunately, I got the recap started in the sixth inning, and the way this one got stuck in the La Brea Tar-pits thereafter, that gave me plenty of time to fill in the details. 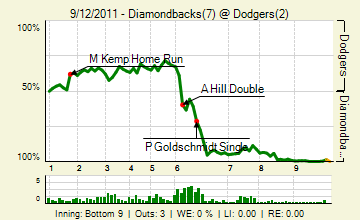 It just never gets old, does it? Same two teams tomorrow, Ian Kennedy goes for his landmark twentieth win, against Chad Billingsley. Fortunately, I'm not on the recap, so I might get to bed before midnight.