Diamondbacks 6, Padres 7: The Tacos Of Defeat

Share All sharing options for: Diamondbacks 6, Padres 7: The Tacos Of Defeat

Free tacos have basically equated to wins for Arizona this season. They have kicked the offer into operation by scoring six runs a total of 43 times during the 2011 campaign, and the Diamondbacks have a record of 41-2 in those contests. Unfortunately, this afternoon represented the second such loss of the year: while the home team did manage a heroic comeback from a seven-run deficit, they fell just short, leaving the tying run in scoring position at the end of the seventh. The Arizona home winning streak ended at 15, and our magic number remains unchanged at eight.

Initially, this was a lousy game all round: one wondered whether the adrenalin from the previous couple of days had run out, triggering a collective team crash. For Josh Collmenter couldn't tomahawk his way out of a paper-bag, while the Diamondbacks offense turned the opposing starter into the re-incarnation of Steve Carlton (per Mark Grace). Even SnakePitters seemed disinterested and/or absent, with the Gameday Thread one of the quietest seen around here for a very long time.

After Collmenter had a perfect first, Ryan Roberts banged a pitch back up the middle for a lead-off hit. However, the rest of the inning did not go as well. Gerardo Parra failed to get the bunt down and traded places with Roberts at the expense of an out. Aaron Hill then did more or less the same, albeit with a ground-out rather than a bunt, and was then caught trying to steal second. Because, after all, the Diamondbacks apparently don't mind whether or not their clean-up hitter, Paul the Goldbomb, gets to bat with runners on base.

It was our 52nd caught stealing of the year; add on the 68 outs elsewhere on the basepaths [a number no other team can beat], and that's the equivalent of forty entire innings worth, or about four and a half entire games, the team has made, after doing the difficult thing i.e. getting on-base. The momentum stayed in the San Diego dug-out, as a lead-off double came around to score, giving them the game's first run, just as they had on Friday and Saturday. Chris Young walked, and stole second; he was stranded there, but became the ninth Diamondback player to join the 20/20 club, with twenty home-runs and twenty stolen-bases. Here's the full list.

The Padres got to Collmenter badly in the third, as he gave up three hits and two walks, including one with the bases-loaded. That resulted in three runs for San Diego. While Arizona had come back in the last couple of games, they had never trailed by more than three - now, they found themselves down by four. Unfortunately, they found themselves almost incapable of solving Wade LeBlanc; after that lead-off single to Roberts, the next Diamondbacks hit didn't occur until the sixth. Meanwhile, Collmenter allowed a two-run homer before retiring anyone in the fifth, and that marked the end of his worst outing since the Dodgers clobbered him out in the third inning on August 5th.

Having fallen seven runs down, the Diamondbacks decided they had the Padres right where they wanted them. Henry Blanco got his seventh home-run of the year to lead off the sixth, and after Arizona loaded the bases, the Padres pulled their starter, despite a low pitch-count and two outs in the inning. This move backfired badly,. as their reliever immediately allowed a two-run double down the left-field line to Young, followed by another two-RBI hit, in the shape of Collin Cowgill's single. All of a sudden, the score was just 7-5 to San Diego, with Arizona cooking up another one of their patented comebacks, driven by the third time through our line-up.

Zach Duke had been brought in to do some mop-up work, in his regular blow-out situation. However, he found himself in a game by the end of the sixth, and he did very credibly. Duke worked three innings, allowing one run on three hits and a walk, and also had a single in the big rally. After that, the Diamondbacks pulled one closer in the bottom of the seventh, on a Justin Upton pinch-hit groundout. He then stole second, to put the tying run in scoring position, but after a four-pitch walk to Aaron Hill, Paul Goldschmidt grounded out. And while Cowgill got on base with one out in the eighth, we could progress the runner no further.

Brad Ziegler and Ryan Cook combined to hold the Padres where they were through the eight and ninth frames, setting the stage for the Diamondbacks' last three outs. Willie Bloomquist drew a walk to lead things off, but Ryan Roberts and Upton found themselves swinging and missing at a parade of fastballs. Aaron Hill had one last chance to extend his hitting streak, only to come up empty, lining a ball straight at the Padres' short-stop, ending the game. The Brewers beat the Phillies, dropping us back behind them in the home-field standings, and the Giants look likely to avoid being swept by the Dodgers. 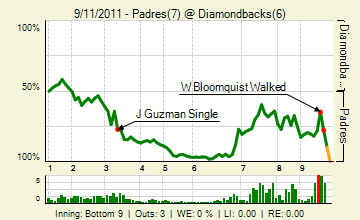 We failed to crack three hundred comments for the first time in a while - and it would have been a lot worse, if not for the late-inning comeback. I suspect the first weekend of the football season didn't help. CaptainCanuck was the only person to crack fifty, with SongBird and Clefo the sole other commenters to reach even half that. Also present: Wailord, GuruB, Turambar, blue bulldog, NASCARbernet, snakecharmer, Jdub220, Dan Strittmatter, kishi, Jim McLennan, The so-called Beautiful, txzona, VouxCroux, Gibbysdad, asteroid, Backin'the'Backs, hotclaws, AcucracK, Stile4aly and since_98.

No comment turned green [in part because I raised the threshold to four, after the great rec'd fiasco earlier in the season[. A few reached three recs, but I like the peculiarly self-fulfilling nature of this one by CaptainCanuck.

COTD will have one rec

"If you find a man or woman who sticks around after you tell them "I may be a demented horse, but I know CPR," you marry them. No questions asked." - kishi

So it did, Capn': so it did... Off to Los Angeles for this team as we hit the road against the NL West this week. I'll be back in a while with SnakeSounds, but that might be on the other side of either Law and Order: UK or Persons Unknown, depending on the missus's wishes.