Continuing with the 2001 World Series theme, the Diamondbacks again sported the purple-and-teal on Saturday night, a night that filled Chase Field with promises of a replica ring. The 48,017 in attendance looked to see their team take its fifteenth consecutive home contest on the arm of Wade Miley, and while Miley's pitching wasn't solid, it was good enough. The Padres led most of the way. The Diamondbacks were in a tough spot heading into the ninth inning. Then again, these are the 2011 Diamondbacks.

The players took the anniversary thing a little bit further. Facing one of the best most well-known closers in baseball, the Diamondbacks lit some ninth inning fireworks to force extras and ultimately downed the Padres 6-5. You can blame Bud Black for not being incredibly bright. If you're a Padres fan, you can also comfort yourself by realizing the season's over anyway. Though, at the SnakePit, we're now following a team vying for the World Series. This whole winning thing is pretty cool. Getting used to it. The Magic Number stands at eight, meaning we could conceivably own our spot in the playoffs on Wednesday night. It would require a Giants loss tomorrow against the Dodgers and a Padre sweep over San Francisco, but the fact itself is awesome. We're nearing October and there's plenty of baseball to be played.

After an apparently awesome ceremony celebrating the 2001 roster (which I missed, 'cause I guess I need to pay more attention to events outside of game start times), the crowd seemed thoroughly ready. It was pretty awesome to hear just how ready everyone was for the playoffs, position secured or not. Maybe the fan base can now thirst for another championship after being reminded of the heroics of 2001, regardless of whether or not the fans are of the fairweather variety. They were treated to a particularly riveting game earlier on: the Padres somehow scrapped two across in the second (thanks to two walks from Miley, two of four on the night), yet the Diamondbacks countered with two of their own in the bottom half off of doubles from both Chris Young and Lyle Overbay. Those two have been pretty good. Stay tuned.

It was much of the same over the next few innings, with a single here and a groundout there from both squads. San Diego was the first threaten, leading off the fifth with a single from Alex Gonzalez. Tim Stauffer then sacrificed the runner to second to bring a Cameron Maybin with a runner on second; Maybin grounded a ball to John McDonald, who opted to nab the runner at first rather than the advancing Gonzalez. Two walks later, Kyle Blanks flied out to quiet the threat and keep the game knotted at two a piece. Miley didn't look incredible, but #GibbyBall elected to send him out to pitch a sixth inning. This... was not the greatest of decisions. Chris Denorfia singled, James Darnell (won't lie, hadn't heard of him) homered, and Luis Martinez doubled before Miley finally got the hook. The team was down 4-2 at this point with a runner on second in the top of the sixth with no outs. The situation, she was not good. Micah Owings came in and allowed the runner to score (on a flyout/sac bunt, though), giving Arizona a 5-2 deficit heading into the bottom half.

The Diamondbacks again answered as soon as possible, with Justin Upton and Miguel Montero singling and doubling, respectively to lead off. Geoff Blum strolled to the plate and grounded out on a 1-1 pitch, moving both runners over for the cost of one out and dropping San Diego's lead to two. It took one more walk to Chris Young before Stauffer was taken out of the game, with Arizona sitting pretty with runners at the corners and one out. Sadly, the general mood went from happy to sad during Overbay's at-bat: a pitch got away from Martinez, rolling at a moderate speed to the catcher's right. Montero initially hesitated before committing to home, and it ultimately costed him. Though CY advanced to second, Montero was caught easily at the plate. He may have made it had he not hesitated, but the out was recorded regardless. Overbay flew out, and that was the sixth.

Not a whole lot happened until the eighth, which you can use to show the efficacy of Micah Owings. He allowed a single in his two innings of work, which is a nice bounceback from his ugly performance in Colorado. Another old face (all this nostalgia in one night!) greeted us in the eighth. Chad Qualls relieved Bass and quickly reverted to Chase Field form. Aaron Hill extended his hitting streak to 13 games, and Upton singled to bring up Montero with two on and none out. Clearly wanting to drop his WPA lower, he grounded into a tailor-made double play, Heath Bell came in, and Blum grounded out to end the inning. Hurray, anticlimactic...ness! At least Ryan Cook shut down San Diego in the ninth...

... oh, the ninth. Maybe I can let the video explain it better than I can? First, Chris Young was up. After him was Lyle Overbay. Then, we went to the tenth. The Padres threatened and came up short, and Bud Black was given a chance to display his poor decision making. After Arizona put runners at the corners with one down, Black chose to walk Geoff Blum (and LOL moment in and of itself) to load the bases in the bottom half of the tenth in a tie game with one out. He almost looked intelligent when Chris young struck out, but then Joe Thatcher came in and walked Overbay on four pitches. LOL. Dbacks win, 6-5. How's that for a way to celebrate the greatness of years past? 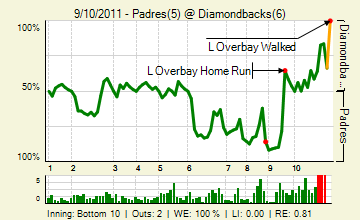 How's that for a Fangraph? Bud Black also argued some stupid rule that he was wrong about, so I'd imagine that he'll be trying to protest (though, I'm not all that clear on how that system works) the game. From what I've gathered from those in the GDT, Black was arguing that Montero didn't go from second to third on the walkoff walk, but Rule 4.09(b) states that "only the batter/runner has to touch first, and runner on third has to touch home", to paraphrase a paraphrase. Silly Bud Black. Stay relevant, San Diego. We almost hit 900 comments, and probably would have had the game gone on a tiny bit longer. It seemed that the 'Pitters were especially comment-happy during a few moments. You can guess what coincides with the spikes. Snakecharmer led the way on the night with 83 comments; the following were also present: VouxCroux, Jim McLennan, njjohn, CaptainCanuck, Jdub220, Husk, asteroid, luckycc, UofAZGrad, diamondfacts, Augdogs, kishi, 4 Corners Fan, GuruB, Zavada's Moustache, dbacks25, oldspartan, jinnah, emilylovesthedbacks, NASCARbernet, Stile4aly, hotclaws, txzona, Dan Strittmatter, dback4life, Clefo, SongBird, Sprankton, blue bulldog, TinySarabia, dbacksfann, Torpedosneak, YoungCardsFanatic, AZDBACKR, DirtyWaters, MrSham0123, and dbacks4life.

Comment of the Night goes to luckycc, who not only had the top two most-rec'd comments, but also the awesomest, even if it was just a proxy:

"We passed the torch tonight. It’s their time now."

This is not going to be pretty. We're talking violence, strong language, adult content...

We look to drop the magic number even further tomorrow. The Brewers lost as well, so as it stands, we'll have home-field advantage in the NLDS. Jeez, just the fact that I'm typing about how we're vying for home-field advantage for anything in September trips me out. Wade LeBlanc toes off against Josh Collmenter tomorrow in the series finale. Sweeping San Diego in a four-game set and winning five in a row sounds pretty cool to me.