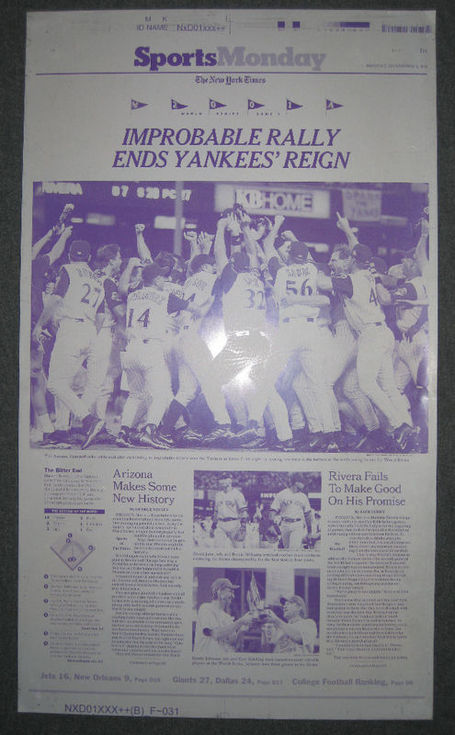 There were quite a few candidates for this edition of Thing of the Week. Should I go for the already-running auction for this afternoon's replica ring giveaway, with a 'Buy It Now' price of $35? Or perhaps the person who is already selling tickets for Game 7 of the World Series at Chase. I'm not sure which is more optimistic: the thought that we'll get there, or that someone will pay $850 for a seat in Section 306. I liked the apparently vintage set of 12 folding fans: I mean paper ones with the D-backs logo on them, though I'm sure I could have squeezed in a joke or two about the Giants base of support since the All-Star break. But instead, we'll go for something pretty unique:

Purchased from an employee of this newspaper, this is an actual newspaper printing plate. These plates were produced on the night of the issue date by the stereo department for the pressroom at the now defunct Edison Printing Facility in New Jersey. This plate is unused, as any used plates would be covered in ink and would show some wear. This is a very rare and unique collectible; a must-have for the avid collector!

I have to say, for $99.95 plus ten bucks in shipping, this is pretty tempting. I'm not sure why the owner is so coy about the "major New York newspaper" thing. Even if you didn't notice the New York Times logo on the top of the plate, Googling for the headlines tells you exactly where they came from - and, in addition, allows you to relive the moment [can I just say, that it never gets old, and never will?]. Perhaps they were snuck out of the printing plant by an employee or something?

The same seller has quite a few other plates for sale. Most are baseball-related, though none are likely to be of much interest to Diamondbacks' fans [I don't think I'll be bidding on the one describing Barry Bonds' record-breaking home-run, thank you very much]. Curiously, also listed are pages about John Denver's death in a plane-crash, a full-page advert for the opening of Spider-man [the movie, not the Broadway disaster] and, bizarrely, a page about Queen Elizabeth II's trip to India in 1997.

While I'm not quite sure what I would do with one, they are certainly a cool relic of a fast-disappearing past, depicting a method which had not changed a great deal since Gutenberg cranked out his bible in the 15th-century. I'm not sure if newspapers even use plates any more: I suspect it may well all be handled electronically, with items like this now more likely to be found in a museum alongside other journalistic dinosaurs from a bygone, largely irrelevant era like typewriters, cameras that use film and Dan Bickley.

Hey, never waste a change of a cheap shot at a Cubs fan, that's what I say...