The Arizona Diamondbacks and San Diego Padres traded blows tonight, Mat Latos and Daniel Hudson going toe to toe for 7 innings. In the end, another Gibson lineup decision paid off, as Lyle Overbay clutchness ended up being the deciding factor, and Huddy finished the complete game for his 16th win of the year.

Now, on to the details of the game. Took over 'charmer's recap, and in an effort to change things up a bit, we've gone haiku form tonight:
(For a more traditional recap, SBN Arizona has a pretty good one)

Bottom of the 1st:

Bottom of the 3rd:

Bottom of the 4th:

Bottom of the 5th:

Bottom of the 6th:

Bottom of the 7th:

Bottom of the 8th:

Hill leads off with walk
Miggy singles, makes it a
Seventeen game streak

RyRo strikes out on
Ball 5 of his at bat, but
Lyle drives in the run

3 to 2 the score
Will we see Hernandez? No!
Hudson gets it done. 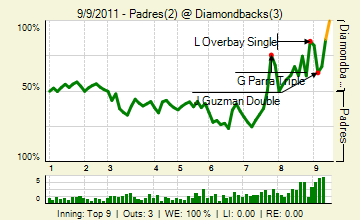 Me: Triple Digits
Clefo And BulldogsNotZags
Had More Than Eighty

The uniforms workedThey'll be back tomorrow nightLet's go win again!

Tomorrow We Play
Once Again San Diego
Either Watch Or Don't