So I checked out their Diamondbacks site, Daily Dbacks, to see what sort of fancy new bells and whistles they have added to the copious amounts of stats, insight, commentary, charts & graphs we already get from other sources. 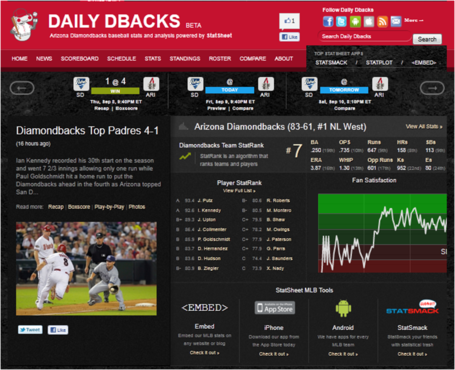 The home page "dash board" is a bit cluttered, but includes a nifty Fan Satisfaction chart. The Satisfaction Index is a compilation of metrics comparing a team's performance against expectations. While it lacks input from real fans about how we "feel", it's a remarkably good indicator. Just check out Fan Satisfaction charts for the Diamondbacks compared to the Rockies: 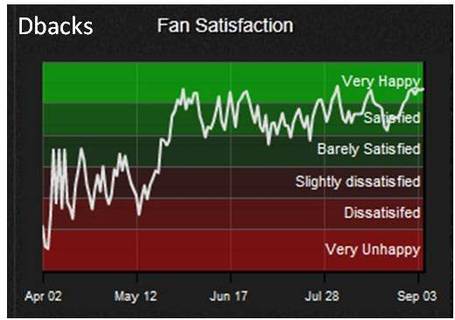 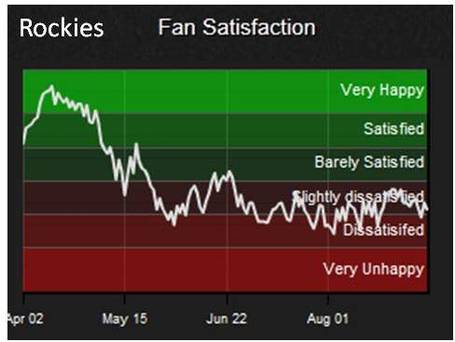 Their Win Probability chart looks identical to the FanGraphs charts included in the SnakePit game recaps, albeit with a different color pallet.

Next, over to their Player Stats page, which I noticed, includes full year MLB playing time for players currently on our roster - so the stats for Overbay, Hill and McDonald include their time spent with Pittsburgh, and Toronto before joining the Diamondbacks. Not that there's anything wrong with that, but visitors will need to look elsewhere for a player's performance while wearing a Diamondbacks jersey.

Clicking through the Stats section, you'll notice their proprietary metrics, including team power rankings and individual player rankings and grades.

Also under the Stats header, you will find Trends, which allows you to customize simple charts by selecting from several options:Team, Stat Type, Player, Time and Period, and identifying the specific stats to display.

So far, so good. Off to their Team Roster, which at first glance, looks quite adequate. But when I scrolled down, I stumbled across two new charts - data presented in a way I've never seen before.

Interesting...  the Impact charts show a visual representation of an individual player's contributions to the overall team batting/fielding or pitching performance.  Naturally, I had to investigate, and while mousing around, I noticed an anomaly with the Offensive Player Impact, possibly brought over from their Player Stats, which include a player's performance from other teams if they were traded mid-season. The chart shows that Hill's 16 SBs contributed 38% of the team's total. Yes, Hill does have 16 SBs, but they are all from his time in Toronto. 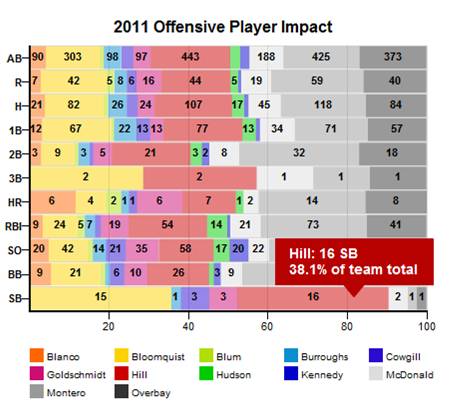 And then I notice this chart only includes performance/impact for the top 12 players, sorted alphabetically by last name, from Blanco to Overbay. Huh?

They completely ignore contributions from four KEY offensive players: Parra, Roberts, Upton and Young, all because they fall in the second half of the alphabet. These four have each played in more games and contributed more offensive impact than just about everybody else included on the chart (except for Montero).  By omitting four key players, and including non-Diamondback playing time for a few others, the "impact" calculation gets completely messed up. It shows a percentage of the wrong denominator.

I emailed the guys over at StatSheets about this anomaly and they replied immediately that they fixed the charts.
So there you have it - the new improved Offensive Player Impact Chart, no longer limited alphabetically by a player's last name. They still use Full Season stats for players who've been traded mid-season (not their contributions / influence when playing for a specific team). But the funniest thing about the charts they corrected, is that their Pitching Impact chart now includes Overbay, Burroughs, Montero, McDonald and Blum! Go Figure.

And although the chart is still not perfect, hats off to the site for responding to my email so quickly.

Also under the Stats header, you will find Trends, which allows you to customize simple charts by selecting from several options:Team, Stat Type, Player, Time and Period, and identifying the specific stats to display.

Another interesting feature is:

Running a STATSmack of the Dbacks vs. the Padres brings up two dozen facts where the Dbacks outshine the Padres, and is the easiest way I have found to gather ammunition when arguing with friends about who's team is superior.

Be warned, a few claims may be a little off because their system may not take into account last night's game results AND it ignores players on the 15-Day DL (such as Chase Headley, who is expected to come off the DL on Friday, and who has more doubles than Bartlett and more RBIs than Orlando Hudson).

BONUS: you have the option to "reverse" the smack and see how an opposing team stacks up against yours. In this case, the system spits out a dozen or so baseball stats, but also it includes crime related city data. Did you know, according to the FBI data, San Diego is a better City than Phoenix?

After my first look at the site, I would have given StatSheet's Daily Dbacks site a failing grade because I didn't trust the stats. But once they fixed the Impact Charts, I bumped them up to B- / C+. There are still a few bugs I believe need to be fixed and a difference of opinion regarding the inclusion of non-Diamondbacks playing experience in the Diamondbacks team stats, but I am impressed with several features of the site:

What do you think? Do you like it, love it, or hate it? Do you feel good enough about the data integrity to rely on their stats?