Share All sharing options for: Diamondbacks 4, Rockies 2: Winning By A Razor's Edge

Sorry about the delay, these time zone things are pretty screwy.  However, this is a landmark occasion, as I actually began writing this recap before Jim reminded me that today is my recap day!  Huzzah!

The title is inspired by the situation the D-backs faced in the bottom of the ninth - Troy Tulowitzki representing the tying run at the plate with two out - and, of course, the incredibly awesome pledge by D-backs President Derrick Hall and GM Kevin Towers to shave their heads should Arizona string together a 10-game winning streak.  With Arizona's current streak at nine games after tonight's victory, I was obligated to come up with some kind of pun pertaining to the possibility of seeing Mr. Hall and Mr. Towers sporting their best Charles Barkley-esque waxed domes (or so we can only hope).  The pun is certainly not perfectly applicable, but it's really hard to come up with puns that involve the word "clippers" without confusing the portion of the audience that refuses to acknowledge the existence of the NBA...

With my maximum allowance of two basketball-related references per month exhausted, let's get back to this baseball game before Jim goes into a "HOLY CRAP MY WEBSITE HAS BEEN INVADED BY BRIGHT SIDE OF THE SUN" panic.  Join us after the jump!

The game was entertaining from the very beginning, as one of the biggest plays of the night occurred just three batters into the game.  After D-backs starter Josh Collmenter gave up a leadoff double to Dexter Fowler, who was sacrificed over by Mark Ellis, Carlos Gonzalez came to the plate and hit a lazy fly to left field.  It wasn't particularly deep, but Fowler has awesome speed, and decided to try to tag up on the play and put the Rockies on the board early.  The problem with that plan, of course, is that Gerardo Parra is really an Olympic shot put gold medalist who plays baseball in the summertime to pay his bills, and thus possesses a throwing arm capable of things that most men aren't capable of doing in their dreams.  Parra fired a missile to home to Miguel Montero, who made a fantastic tag, coming across the plate to nail Fowler at home and end the inning.

The bottom of the first was just as exciting - for the home team, anyway.  Singles Bloomquist did his thang, blooping a liner over Ellis into right field to lead off the game (and thankfully dropped anchor at first to avoid his other moniker from surfacing).  After Ryan Roberts flew out, Justin Upton got pegged by a fastball on his arm, the 16th time he's been plunked this year.

We interrupt this regularly-scheduled recap to bring you an urgent message: if anybody really believes that this many pitchers in the big leagues are simply this bad at commanding their fastballs inside, I have a bridge I'd like to sell you.  I'm not directly accusing opposing starter Esmil Rogers of intending to hit him (really, I'm mostly still bitter about/directing this towards the Nationals), but Upton had 11 HBPs in 1,728 plate appearances in his career prior to 2011, and now had 16 HBPs in fewer than 600 plate appearances so far this year.  For those who think that Upton invites this treatment by crowding the plate, the numbers say that's a horrible excuse.

Back to the bottom of the first.  With Upton plunked, Montero strode to the plate and unleashed the infamous "using every ounce of strength I have" swing, leaning farther back than a La-Z-Boy recliner.  With this rip, Montero utterly destroyed a hanging 87-mph cement-mixer change-up from Rogers that was, for all intents and purposes, a batting practice fastball, and sent it into the right field seats.  Revenge is a dish best served in Uptown.

The Rockies struck back in the top of the second off of Collmenter.  After the first two batters in the inning were retired, Seth Smith lined a double into right field, bringing up Eliezer Alfonzo.  In the first of two mystifying consequences, Alfonzo swung at a pitch that was maybe a foot above the dirt.  In the second of two mystifying consequences, Alfonzo actually hit said pitch, chopping it high above Roberts at third and into left field, scoring Smith on an errant throw from Parra an obvious attempt to bait Alfonzo into trying to advance on the throw from Parra, who we all know doesn't make errant throws.  Smith scored, but Montero made a great throw down to Aaron Hill at second base, nailing Alfonzo as he tried to advance to end the threat with Arizona still up 3-2.

Things quieted down significantly after Dexter Fowler hit a solo home run off of Collmenter in the top of the third, as Rogers and Collmenter traded zeroes for three innings thanks to some absolutely spectacular defensive plays from both clubs.  The next action occurred when Arizona came up to bat in the bottom of the sixth inning, again with a two-out rally.  After Paul Goldschmidt and Chris Young went down to lead things off, Aaron Hill came to the plate and continued to do exactly what he's done in his eight games with Arizona, despite not having done it in his final 249 games in Toronto: hit.

How this is happening is beyond my wildest comprehension, but Hill crushed a double into left field, prompting an intentional walk to Gerardo Parra to bring up the pitcher's spot.  Sean Burroughs pinch-hit for Collmenter, and continued his Hill-like experience of hitting for a multi-game stretch, seemingly out of nowhere, roping a single into center field off of Rogers' glove to score Hill and extend Arizona's lead to two runs.  Arizona would threaten again in the seventh and eighth innings, but would have a runner thrown out at home each time, failing to score again and keeping with the tradition of this game serving as a clinic of outfield arm strength.

With Collmenter out after another successful start of six innings, five hits, two runs, three strikeouts, no walks, and a home run allowed - to think of how recently we were worried about this guy needing to be replaced in the rotation, and how great he's been ever since is quite remarkable -  the A-bullpen came into the game and went about business as usual.  Lefty Joe Paterson came on to retire Todd Helton and Seth Smith, getting the former on a groundout but allowing the latter to single before being pulled for Bryan Shaw.  Shaw whiffed Alfonzo, then got pinch-hitter Jason Giambi to groundout, ending the threat, after a Jonathan Herrera single put a runner in scoring position.

David Hernandez came on next and gave up a pair of free passes, walking Ellis and hitting Kevin Kouzmanoff (a.k.a. Kevin Kouzmanoff: cleanup hitter), but getting CarGo to strike out swinging and inducing flyouts from Fowler and Helton.  Finally, Putz came on for the ninth, retiring the first two batters in Smith and Alfonzo before giving up a single to Herrera, bringing up Tulowitzki, who was pinch-hitting for Huston Street.  Despite being the last guy most D-backs fans wanted to see at the plate in this situation, Putz simply scoffed and went about abusing Tulo, notching a three-pitch strikeout in which the Rockies' star shortstop whiffed on each of the last two pitches from Putz, a 94 mph heater and an 86 mph split.

Bam.  Game over.  Rockies: swept.  Fangraph time.  Today's witty award titles are named in honor of the news that Conor Jackson was just dealt to the Boston Red Sox to serve as a "super-utility" guy.  Pretty depressing when you think about what he once was... 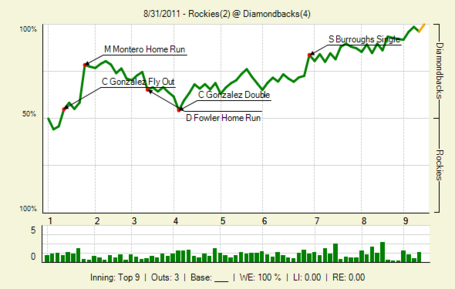 COTD was an easy choice.  An adaptation of "Pinball Wizard"?  After my own heart, kishi...

Ever since I was a young boy

I’ve played the stiched white ball.
From Wrigley down to PetCo,
I must have played them all.
But I ain’t seen nothing like him,
Not even Derrick Hall.
That fiery, frumpy, bald kid-
Sure plays a mean baseball.