Share All sharing options for: Diamondbacks 1, Astros 9: Yeah, That Sucked... 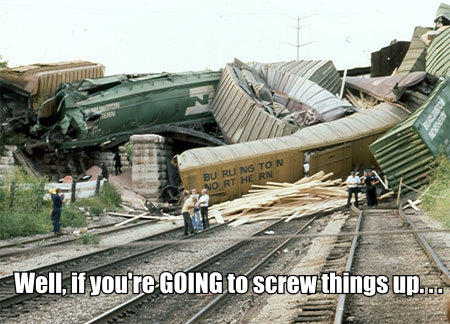 There was a late reversal in casting from the anticipated roles mentioned in the Gameday Thread. The piranhas were played by the Houston Astros, and the horse dipped in BBQ sauce was played by the Diamondbacks, and in particular, Daniel Hudson, who had the bullpen phone ringing with a first inning that featured six hits and five runs, before Arizona got to send anyone to the plate.

On the plus side, it's nice to be able to start the recap in the middle of the first inning. Which is why it's going up the second the final pitch has occurred. And, hey: ALTG(are on the way to)L

Admittedly, the defense were not exactly helpful behind Hudson, with Cody Ransom committing an error that led to an additional base-runner and, indirectly, three unearned runs. However, Hudson didn't help himself by failing to cover first base on a screaming line-drive that Paul Goldschmidt could only knock down; with our pitcher spectating, the runner reached and a couple of batter later, the ball was cranked off the fence in right-field, and the Diamondbacks' win percentage was already down to below 14%, before we even got to walk to the plate.

Arizona did load the bases in their half, but Collin Cowgill grounded out weakly, so we stayed at zero. The Astros, not so much: they didn't get any help from our defense, but still added three more hits, and two runs. They had ten hits off Hudson by the middle of the second, and even their outs tended to be hard-hit. Both I and Mark Grace wondered, independently, whether Hudson might have been tipping his pitches, as Houston also torched Daniel effortlessly when he pitched against them on the road, earlier this year. He had thrown 55 pitches by the of the 2nd; Astros' starter Wandy Rodriguez had thrown 52, but we had scored nothing off him.

Is it worth nothing that Hudson has done significantly better with Miguel Montero catching him than Henry Blanco? 'charmer scoped out some stats, which I've now updated with tonight's outing:
Blanco – 4 games, 22 IP, 14 ER, 5.72 ERA
Miggy – 20 games, 135 IP, 53 ER, 3.53 ERA
I'd keep Hudson away from Mr. Trejo going forward. Mind you, the same is true generall. All told, Montero's ERA is 3.89, and Blanco's is 4.70. However, that might well just be because the three pitchers Blanco has seen most are Saunders, Duke and Collmenter.

Hudson's final line - 3 IP, 11 H, 7 R, 0 BB, 1 K - was epically awful. It's only the third time in franchise history a starter has given up so many hits while lasting three frames or less. In 2009, Doug Davis matched tonight's tally, and last April Edwin Jackson managed it in only 2.1 innings against the Rockies. To some extent, he was BABIP'd to death: of the 19 batters to put the ball in play [21 faced, excluding the HR and the K], 11 got hits. That's a .559 BABIP. But as noted, he can hardly be called unlucky. The 16 hits allowed in total by the Diamondbacks were one short of the season high, against the Cardinals on April 13.

In the middle innings, some stuff happened. However, I had lost interest and was watching WWE Monday Night Raw, and a lengthy debate between C.M. Punk and John Cena before they signed their contract to face each other at SummerSlam on Sunday. Yes, that's how bad this game sucked: professional wrestling, without any actual wrestling taking part, was significantly more entertaining. Zach Duke gave us a couple more scoreless innings, then let the Astros score twice in the sixth. I surrendered control of the remote to Mrs. SnakePit. Blanco did homer in the seventh to break up the shutout, but here's an artist's impression of tonight's Fangraph. 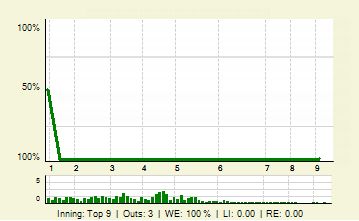 Comment of the Day goes to Dallas D'back Fan, for this ironic bit of post-Blanco homer commentary

I'm off to watch Falling Skies. SnakeSounds - if anyone on the team wants to speak - will follow after I've finished that. Get 'em tomorrow, guys. You'd better, since I'll be at the game: if there's a repeat of tonight, I will be getting all Tottenham on your asses.