So, we entered today's game knowing that a victory would mean sole possession of the NL West throne, as the Giants fell once again to Philadelphia. Joe Saunders (who's earned, as of late, the right to go without criticism) went toe-to-toe with Los Angeles' AA call-up Nathan Eovaldi. Unfortunately, the baseball gods decided to skew some BABIP numbers in the favor of the Dodgers, and the hits piled up a bit too quickly for our offense to keep up with. It wasn't an especially bad outing from Joe Saunders, but the loss looks all the same on the scoreboard and in the standings. Some poor defense and offense badness were culprits as well -- hit the jump for the details. Hey, we're still just a half-game back.

The Colonel managed to give up eight hits and a walk in his 5.1 innings of work, giving up four runs in the process. Only one of those eight hits, though, was for extra bases, the standout hit being a one-out two-bagger from Juan Rivera in the top-half of the second. Like I said, Saunders didn't really pitch all that poorly (granted, that won't stop some from looking at his line, seeing the "L", and judging it from that); he just was the victim of poor luck, with a lot of measly knocks getting runners on base, setting up nicely for other Dodgers to get equally lame singles to drive in some runs. I did a quick runthrough of the play-by-play to see what LA's BABIP looked like on the night: it looked like Saunders owned a nice .444 on the night, which has gotta be frustrating. You could make the argument that if he'd miss more bats (he had one strikeout tonight) that this wouldn't be as much of an issue, but you know what you're getting with Saunders and nights like these are the ones that just make you shrug (see, like this guy: ¯\_(ツ)_/¯).

Here's an example: Rod Barajas, he of the .220 average and 86 OPS+, went 3/4 tonight with two runs batted in. In case it doesn't go without saying, all three of those hits were weak singles to center. Barajas knocked in the first run in the second, driving home Rivera from second, giving Los Angeles a quick 1-0 lead. Joe Saunders, however, pulled his best Daniel Hudson in the bottom half. With the bases loaded and no outs (courtesy of two walks and a Paul Goldschmidt single), Joe Saunders singled home both RyRo and Goldy, putting Arizona up on top (for the last time, unfortunately). Andre Ethier added a run in the third on a groundout, and Aaron Miles another in the sixth on a single before Saunders was pulled in favor of Brad Ziegler. Of course, Ziegler gave up a single to Barajas, scoring another run. Ziegler gave up another run on a fielder's choice in the seventh to Juan Rivera before getting pulled for Shaw, the score being 5-2 at the time.

In case you haven't noticed, the Dodgers decided to pelt us with rocks instead of bludgeoning us with a boulder. Maybe it was there way of letting us down kindly. The only other thing of real note was the ninth inning: after Justin Upton put the deficit to two in the eighth, Ryan Roberts doubled deep to left with one out in the ninth. This, of course, set up a beautiful storyline: Paul Goldschmidt, in his fifth major league game, strode up to the plate with his team down by two in the bottom of the ninth and a runner on third. He was given the green light on a 3-0 count, saw a ball he thought he could drive, and! -- ... promptly grounded out to third. Gerardo Parra grounded out to first to end the game at 5-3. You could make the argument that the crazy-powerful 23-year-old should be greenlit in those situations, but I'm fairly certain that it'd be much easier to argue in the other direction. For that, another shrug. ¯\_(ツ)_/¯. 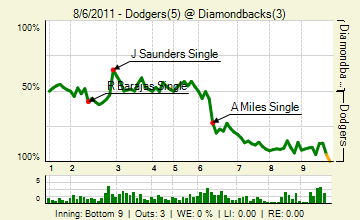 Good freaking job, Gibson, now we have Saunders up with the bases loaded

After the good hitters in our lineup do what you’d expect from them.

Anyway, it would certainly have been nice to win tonight against a kid from AA making his Major League debut, especially when Clayton Kershaw awaits us tomorrow, but I guess that's how the game goes. We'll have Ian Kennedy on the mound to counter, and hopefully he'll be a little luckier than Joe before him. San Francisco's finale against Philly starts at the same time as our game tomorrow (1:00 MST), as they put Tim Lincecum on the mound against the returning Roy Oswalt. It's definitely possible to get sole possession tomorrow, the road will just be a bit tougher. See you guys then!