Share All sharing options for: Diamondbacks Thing of the Week: Chocolate Overdose

If you're going to the movies this weekend to see Rise of the Planet of the Apes [we're looking at going tomorrow morning]], then you'll probably engage in the time-honored American ritual of sneaking your own candy in to the theater. Cargo pants and a capacious hand-bag are your friend, though you would have some way to go to match Mrs. SnakePit, who went to see Godzilla, and was cranking out Absolut screwdrivers, assembly-line style, for her row. Which is, probably, the only way to get through that dubious remake. But if you want to do things in Diamondbacks style, here's your chance:

$139.99,. plus $7.99 in shipping. That seems like a lot, but then, five pounds of M&M's is also quite a lot. A standard bag of the candy is 67 grams, so five pounds works out at about 165 regular-sized bags, give or take a bit for the wrapping. Buying in bulk, as here, that works out at a pretty credible 90 cents per bag: definitely a lot cheaper than concession prices. On the other hand, you are certainly paying a premium for the specialized design: you can pick up a 5 lb bag of plain, unDiamondbacked M&Ms for about $42, including shipping. That's more than a hundred bucks less, if you are less concerned about style than substance.

Nutritionally, what are you looking at there? M&Ms have about 142 calories per ounce, so that means your five-pound monster package contains approximately 11,360 calories. That's about five days recommended intake for a 180-lb man of low activity. And, let's face it, probably only someone of low activity would give serious consideration to buying five pounds of candy imprinted with their team colors and logos.

That said... The D-backs ones do look spiffy, with the symbols standing out nicely, thanks to the contrasting shades of white, red and black. Generally, it's a piece of merchandise where simplicity is best: the picture above is considerably larger than life-size [if only M&Ms actually were that size...] and even there, some of the detail is beginning to be lost. Some teams are not as lucky as Arizona: if you get the Blue Jays pack, half of those don't come with any Toronto logo at all, and the other half don't exactly stand out. Though I do like the idea of picking up some Dodgers ones for this weekend, just so I can say: "Eat LA! Eat LA!"

But why stop at team logos? M&Ms offer a full-blown candy personalization tool, which allows you to select your colors, upload images and add whatever text you want. Well, almost whatever text you want. When I attempted to put "Suck it, Giants" in, this was rejected with "Oops... You have entered an inappropriate or offensive word for your message." Sheesh. Entire minutes of fun followed, as I played around to see what was and was not permitted in the world of personalized M&Ms, but I'll spare you the details.

Once I got bored with that, here's what I came up with: I'm sure you can do better... 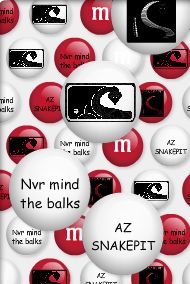