Share All sharing options for: Dodgers 7, Diamondbacks 4 - Deja Vu All Over Again

After going 6-3 on the California road trip and gaining starting the night only a half game back of the Giants, it's time once again to face those formidable ASU alumni Los Angeles Dodgers. Last Friday night in L.A., Josh Collmenter got hit hard, gave up five runs and couldn't get out of the fourth inning. Last Saturday night, Chad Billingsley was cruising along until he ran into the Rallybacks in the sixth inning. If you were to put those two together on the same night, you would get Collmenter struggling early and Billingsley having a solid outing until later in the game.

If that sounds familiar, it's because that's exactly what happened tonight....

The top of the first inning was a sign of things to come for Josh Collmenter. With one out, there were two singles by the Dodgers in front of Matt Kemp. I don't think Collmenter got the memo about not pitching to Kemp, because Kemp hit the ball to the deepest part of the park, the corner between center field and the pool. Luckily, Chris Young patrols center field and made a leaping fence and landed against the fence with the ball safely in his glove. Collmenter is also grateful that Gerardo Parra lives in left field because after Collmenter walked Juan Rivera to load the bases, Parra made a great diving catch of a blooper by Aaron Miles to end the inning with the Diamondbacks still "ahead" 0-0.

After a 9-pitch second inning, the Dodgers made up for their lost first inning runs by breaking out in the third. I can't really put it into words, so here's the play-by-play from JoeStock:

- R. Barajas 2-RBI doubles to LF, scoring Rivera and Loney.
- C. Billingsley strikes out.
- D. Gordon grounds out to 2B.

In that third inning, that was six hits allowed by Collmenter, all hard-hit balls to the outfield, and the one out he got in the inning was a sacrifice fly that was about three feet from being a home run. The score was 4-0 when he gave way to Micah Owings, and Owings promptly gave up his two inherited runners to make it 6-0.

But aside from that, Micah Owings had a fabulous night. He knew he needed to keep the team in it and save the bullpen for the rest of the series, and he certainly made his presence known tonight and might have even pitched himself back into the starting rotation. Overall he pitched 4 2/3 scoreless innings and allowed only two hits (including that first-batter double by Rod Barajas) and three walks. He is 5-0 with a 2.66 ERA and 1.14 WHIP in 18 games with the club this season. Meanwhile, in Collmenter's last two outings, he's pitched a total of six innings and allowed 11 earned runs.

As for Arizona's offense, well, it showed up later in the game. Willie Bloomquist doubled to lead off the bottom of the first inning for Arizona. Half the Snake Pit reached for their nearest nail or staple gun to keep Willie from trying to steal third. We needn't have worried though, as he was stuck there by the inaction of the three batters behind him. Sadly, that'd be the only baserunner the Diamondbacks had on second base until the 6th inning.

Paul Goldschmidt made his big league Chase Field debut in the second inning to loud cheers. He came up with Ryan Roberts on first base, but he lined out to right field. He struck out looking in the fourth and eighth innings, and singled to left in the pivotal seventh inning.

Arizona prevented the shutout in the sixth inning when Justin Upton tripled to the right field corner and scored on a Chris Young sacrifice fly. They made it a real game in the seventh inning. Ryan Roberts walked for the second time tonight to lead off the inning in front of Goldschmidt, who singled. Gerardo Parra singled in and scored Ryan Roberts to make it 6-2. Sean Burroughs pinch hit for Owings and also singled to center, just beyond the reach of the shortstop, and chased Dodger starter Chad Billingsley (pitching change #1). Bloomquist then hit an infield single that was stopped by Jamey Carroll and Goldy scored, keeping the bases loaded and the score was 6-3 in front of the heart of the order. But I bet you didn't think the "heart of the order" included Cody Ransom, did you? No, but Scott Elbert (pitching change #2) came in, Ransom pinch hit for Kelly Johnson and Ransom struck out. Then Mike MacDougal (pitching change #3) lulled Justin Upton to a 3-2 count and Upton scalded one... right to the shortstop Dee Gordon, who made a dive to catch the ball on the fly and double up Burroughs at second base. Arizona got two runs in the inning, but they all came before they had the bases loaded, so to have the bases loaded with nobody out and get shut out, so to speak, was disappointing. But, it was a baseball game again, with the score of 6-3.

With Owings done for the night at 70 pitches, Bryan Shaw came in and gave up a home run to Rod Barajas, putting the Dodgers up 7-3, back at the edge of grand slam distance. In the eighth inning, Chris Young walked and was nearly picked off at second base but MacDougal's throw went into center field so Young scampered to third and scored on a sac fly by Miguel Montero to make it 7-4. With Roberts on first base again, Don Mattingly brought in his closer Javy Guerra to face Parra, who struck out. Willie Bloomquist singled in the ninth inning off of Guerra but Cody Ransom struck out (who didn't see that one coming?) and Justin Upton flew out to center to end the game. 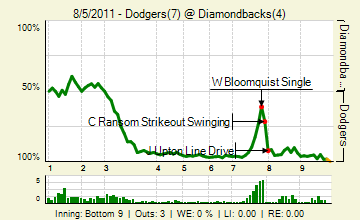 It was a disappointing night for everybody not named Micah Owings, Ryan Roberts or Willie Bloomquist. It'll certainly raise the question amongst the Diamondbacks coaching staff about who should be the 5th starter again on Wednesday. As if we didn't talk about it enough in the gameday thread (a big chuck of the 1,000+ comments were related to that), there's a poll down below, too.

Although Dan's Burroughs rant was the greenest, soco also wins Comment of the Day for his truthiness:

Ironic recs
are the new recs.

Indeed, tomorrow is another day, and the Diamondbacks have another chance to leapfrog the Giants for 1st place, since they lost 9-2 to the Phillies in a game that featured a nice scrum after Victorino was hit a pitch. Watch it, it's worth a laugh or two.

Joe Saunders vs TBA (rumored to be AA call-up Nathan Eovaldi) tomorrow afternoon at 5pm. Be here, or be wondering how the game's going.... or, go to the game and get a Gibby bobblehead... or, go to a sports bar and hang out with some nice cronies... or, well, just be here.