Rockies 4, Diamondbacks 9 - The Eight of Diamonds

Share All sharing options for: Rockies 4, Diamondbacks 9 - The Eight of Diamonds

The last time the Diamondbacks won eight games in a row was in April of 2008, during that magical and oh-so-promising month where the team went 20-8. Would they win eight in a row again, and might this September end better than that one? Well, one of those questions was answered tonight.

The Rockies got on the board first in what was a shaky start by Wade Miley. He walked Dexter Fowler and you know what they say about leadoff walks... Well, the first out was a diving catch by Gerardo Parra, and when Troy Tulowitzki went up with runners on the corners, he popped up to shallow right on the first pitch he saw. But Todd Helton hit a blooper to shallow left field to score Fowler (that pesky leadoff walk) for a 1-0 lead. Miley ended up having three 3-ball counts and 29 pitches in that first inning, and Snake Pitters started biting their fingernails early.

Thankfully, our fingernails were saved by the wonder that is the Diamondbacks offense during this magical run, as they took the lead in the 3rd inning and never looked back. Sean Burroughs singled and Willie Bloomquist walked in front of Parra, who laced a single to left-center field that turned into a triple when center fielder Fowler completely whiffed on the catch, and both runners scored. Justin Upton then swung on a 3-0 pitch and ground out to second, scoring Parra and giving Arizona a 3-1 lead.

The Rockies got a run back in the 4th on a leadoff single from Ty Wigginton and an RBI single from the catcher Chris Iannetta. Miley loaded the bases (courtesy of his own fielding error) with one out in the inning, but the Rockies were afraid of the Parrazooka in left and didn't try to score on the fly ball out, and another fly out ended the inning. Miley ended the fourth inning with 69 pitches, better than the 29 per inning pace he was on earlier, but not great. He pitched through the 6th inning, throwing 97 total pitches and giving up nine hits, two runs, one walk, and three strikeouts. He was helped by a Web Gem catch in foul territory by Justin Upton in the 5th inning (a putout of Tulowitzki, who was 0-for-5) and your standard 8-6 double play to end the 6th.

The Diamondbacks blew the game open off of Colorado starter Aaron Cook in the 5th. Willie Bloomquist's jersey was hit by a pitch, and Parra worked an 8-pitch at-bat into a single. Upton almost hit a home run to left, but his was a fly ball out. Miguel Montero's fly ball, however, was a home run, this time to right field where two guys in the front row bobbled the ball and dropped it to the aisle below. Montero's three-run shot made it 6-2 D-backs, and it chased Cook from the game (after he also walked Aaron Hill) after only. In the 6th, the Rockies intentionally walked Upton to load the bases with one out, and after Montero struck out looking, Aaron Hill hustled up the line on a grounder to third and was safe by millimeters, scoring Bloomquist to make it 7-2.

Bullpen Jack of All Trades Micah Owings came in for the 7th inning and had a 1-2-3 frame. In the 8th, though, he allowed a double and single that scored Todd Helton, and Brad Ziegler came in and got the next two out.

Gerardo Parra led off Arizona's half of the 8th inning needing a home run for the cycle. He only singled, but Upton felt like making up for it, so he launched a no-doubt two-run shot to the center field wall that Fowler could only turn around and watch. Back to back, Parra and Upton were a combined 5-for-9 with four runs and five RBIs.

David Hernandez had been given several days off to rest his contused ankle, so he came in to work off any rust in the 9th inning. And considering he gave up a home run to his first batter in Dexter Fowler - Fowler's first of the year - then yes, I'd say it's a good thing he first came back in a blowout victory rather than a one-run game. But he then got Mark Ellis to strike out and Carlos Gonzalez to fly out to center, and Troy Tulowitzki ended his 0-for-5 night and the game with a strikeout. 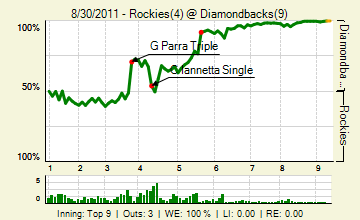 I think it's safe to say the offense has recovered from their brief bout with anemia! Lyle Overbay was the only Diamondback starting position player without a hit, but Parra nearly hit for the cycle, Aaron Hill is now 9-for-27 in seven games as a Diamondback, and both Montero and Upton's only hits tonight were three-run home runs, of which Justin's ties his career high of 26.

Clefo and kishi combined for tonight's Comments of the Day with eight apiece:

From a Bauer outage.

And to top it off - At Least The Giants LOST again to the Cubs!! We have a TACOS-sized lead in the division!! I'm so excited for this team and this weekend's series that I'm using lots of exclamation points!!!!!