Another (mostly) solid performance from the Arizona pitching staff, led by Daniel Hudson, led the Diamondbacks to their seventh victory in a row, as they held the Rockies to four hits at Chase Field tonight. Coupled with another successful defeat inflicted on the Giants by...yeah, the Cubs, our lead in the NL West extended to five games, and took two off our magic number. Arizona came within two outs of becoming the first team since the 2000 Dodgers to allow a total of only five runs in seven games, and while the ninth got a little...unnecessary, J.J. Putz closed it out and gave victory to the good guys.

The Diamondbacks couldn't take advantage of some early wildness from Alex White, who allowed a lead-off home-run to Ryan Roberts (17), then walked three of the next four batters he faced. Unfortunately, Aaron Hill had clearly been reading from the Diamondbacks' base-running manual and got himself picked off first after stumbling. Miguel Montero popped up to second, and Chris Young went down, swinging at ball four with two men on base. That allowed White to escape without further damage, despite having thrown 28 pitches.

Daniel Hudson had to work his way out of trouble in the second, after a walk and single put two Rockies on with no out, and Gerardo Parra was slow getting the ball in on a fly-ball, allowing both runners to advance. Hudson didn't buckle, throwing six straight sliders to the Rockies catcher, including one on a 3-2 count that was a good foot off the plate, and still provoked a swing. A shallow pop-up by the pitcher ended the thread, with Arizona still ahead. We got a lead-off hit from Parra in the bottom half of the inning; he was stranded at second.

Hudson was struggling somewhat with his control and having to throw a ton of pitches. It took him 64 pitches to get through the end of the third innings, and he had three walks by that point. This was uncharacteristically wild for Dan, especially of late. After walking a dozen over his first quarter of outings, he had only issued 25 free passes in the 23 starts subsequent, reaching a high of three on a trio of occasions. Walks to CarGo and the Tool were followed by a first-pitch fly out from Helton, and the D-backs couldn't capitalize on White's fourth walk to Justin Upton, with Montero hitting into a double-play, and basically lollygagging his way up the first-base line.

Neither team could take advantage of a one-out baserunner in the fourth. Young was walked, but ended the inning, caught stealing on a pitch-out. It was our 47th such out on the basepaths this year, a number which leads the National League - Hill's pick-off in the first was Arizona's 25th there, also easily putting us in first-place. If we'd a crap offense, I could perhaps understand the aggression, but this is a team that's comfortably above average in runs per game (4.43 to 4.15), so a little more patience would be helpful.

Hudson finally got a 1-2-3 inning in the fifth, though he has certainly to thank Young. CY made a great running grab of a ball hit to deep left-center by Dexter Fowler. Given the Rockies' player speed, it could well have been an inside the park home-run if Young hadn't snagged it. Still, it helped Hudson keep his pitch-count manageable, allowing him to hit for himself in the fifth, and going out for a sixth, still clinging to a one-run lead. Emphasis on "clinging", as through five innings, Arizona had managed only one hit, Parra's single, since RyRo homered on the third pitch of the game to a D-back.

Another 1-2-3 from Hudson in the sixth, with two impressive swinging K's of Helton and Seth Smith, after getting the Tool [sporting some fetching, entirely pointless, eyeblack - man, that sun is really tough for these 6:40pm starts. In a roofed stadium] on a weak grounder. And Arizona broke it open with four runs in the bottom half. Hill singled, then Upton was hit by a pitch, for the 15th time. That moved him up to third on the all-time list, both for a single season [the #1 is Andy Fox, plunked 18 times in 1998] and career [Upton has 26, Gonzo leads with 61]. This one hit him bang on the spine, and knocked him to his knees, but he recovered to take his base.

Arizona paid Colorado back with a single by Miguel Montero, a double off the wall by Paul Goldschmidt, an infield hit from John McDonald, and a single to left by Hudson, each driving in a run. If you're keeping score at home, that was now 5-0 for the D-backs. And Hudson came out for the seventh, retiring the Rockies in order once more. He finished by sitting down the last 11 batters faced, ending on his 117th pitch. He allowed three hits and three walks, striking out eight, and reduced his season ERA to 3.61, with another excellent outing, where he seemed to get stronger as the evening went on.

Bryan Shaw pitched the eighth in a humdrum fashion, but the ninth inning proved more troubling that expected, in part due to Kirk Gibson's...interesting bullpen usage. Shaw opened things up, barely grazed the Tool with a pitch [sold dramatically on the way to first-base], was replaced by Joe Paterson, who got Helton, then was left in to face two right-handed batters, allowing a single and hitting another batter on his back foot to load the bases. Enter Putz, who finally got the job done - as long as "the job" was "applying a solid plunking". That one drove in a run and brought up Juicer Giambi as the tying run. However, he was K'd and the next batter flew out to left. Phew. 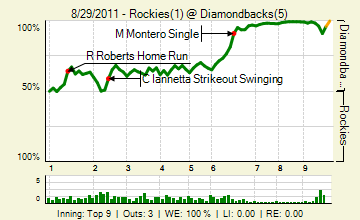 I'll tell you, that dip in the ninth does not quite capture the nervousness felt. Blame for this clearly goes to Stile4aly, who posted an "evil" My Little Pony picture. Fortunately, I was able to post an antidotal St. Penelope before too much damage was done, but let this be a warning to you all. "Diamondponies" indeed... :-( Just over the thousand posts, imstillhungry95 running out an easy winner on 167, with BulldogsNotZags also over 100, and NASCARbernet back in the mid-sixties. Insert joke here.

Most-rec'd post was another one by Stile4Aly, but I'm disqualifying him for the pony pic; so it goes to Clefo for this pithy post, perfectly portraying the pic provided in perpendicular position [or "up", if you must...]

Let's do it all again tomorrow - ideally picking up another game in the alleged "fight for first" - which has turned into a bit of a squash over the past couple of days. I'm quite happy with this turn of events. :-)