As today's game started, it seemed that Arizona fans everywhere were still getting over their series victory hangovers after beating Matt Cain and Tim Lincecum in consecutive road games.  As soon as the lineups were announced, there was some slight falling back to earth with the news that Kelly Johnson and Miguel Montero were out of the lineup against right-hander Ryan Vogelsong, but that would be the least of our gripes (okay, maybe not the least of them) about this game by the time it was over.  The handy trouncing given to us by a mediocre Giants offense, particularly in the D-back debut of starter Jason Marquis, leaves a sour taste in the mouth as we head back home to take on the Dodgers starting on Friday.  A series victory is nice, to be sure, but this certainly isn't the way most teams hope to end 6-3 road trips.

The game started off innocently enough, with Vogelsong and Marquis trading scoreless innings through two, although all four half-innings saw at least one opposing hitter reach base, including a pair of runners stranded in scoring position.  The most exciting event of the early happenings may have been a rather unexpected stolen base from one Paul Goldschmidt, who swiped second base on a straight steal after drawing a walk.  For those hoping to see a continued smooth transition to the majors, though, that would prove to be the only team Goldy reached base, and the slugging first baseman also struck out twice.  There's a reason they're called prospects, after all.

After Vogelsong worked a scoreless top of the third, handed a free out with a runner in scoring position thanks to the usual crummy baserunning we've come to expect from Willie Bloomquist, Marquis ran into a buzzsaw of ground ball voodoo.  Don't get me wrong, Marquis needs to strike out more than one of every 24 batters he faces if he wants to be anything remotely helpful down the stretch - but this got absurd.  The inning began with three straight ground-ball singles off the bats of Andres Torres, Jeff Keppinger, and Pablo Sandoval, plating one run and putting runners on first and second with nobody out faster than you can say "ground balls in play have approximately a 25% chance of being hits."

Carlos Beltran followed with a line drive single to put runners on the corners, and Orlando Cabrera moved each runner up for another RBI with a groundout.  An error at second base from Ryan Roberts followed, allowing Aubrey Huff to reach base and Beltran to move up to third with only one out.  That extra out cost Arizona, as a groundout that Cody Ross beat out on the attempt to turn two plated the fourth run of the inning.  Finally, Eli Whiteside grounded feebly to Cody Ransom, and the hellish inning was over.  Final tally: seven ground balls, one line drive, four singles, four runs, (should have been) four outs.

With Vogelsong cruising on the mound, the 4-0 lead San Fran had after three seemed iron-clad.  It certainly didn't help, therefore, when Marquis went out for the bottom of the fifth and failed to record an out.  He allowed four ground balls to the four hitters he faced in the inning: a single from Pandoval, a single from Beltran, a double from Cabrera, and a single from Huff.  That string of hits prompted the departure of Marquis - final line: 4 IP, 10 H, 8 R (7 ER), 1:1 K:BB, 9:2 GO:AO.  Of the 24 hitters Marquis faced, 22 of them put the ball in play.  Of those 22 balls in play, Marquis generated 17 ground balls.  To cap off the depressing hilarity of it all, Marquis' replacement in the fifth inning, Brad Ziegler, came on and recorded three straight outs on three straight.... ground balls (only after giving up a two-run double on his first pitch as a D-back, though).  If you can make sense out of any of that, I'd love to read the dissertation.

Call it bad luck, bad pitching, or whatever you want to call it, but the bottom line is that the end result was Arizona getting handily trounced in depressing fashion by the team we're chasing for the division title just one day after tying them for first place.  Remember that negative run differential the Giants had that was such a big cause for optimism going forward?  Well, so much for that.  San Fran's 385-390 run spread prior to this game has now been flipped on its head.

FanGraph, or graphical representation of Jason Marquis' BABIP on ground balls with respect to his career norms?  You decide: 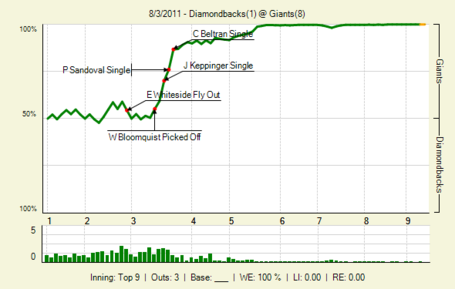 I know, I know, the season is far from over.  I'm just disheartened, I'll get over it.  The very good news is that this loss doesn't change the fact that we get to come home and play the feeble Dodgers once again, beginning this Friday with Josh Collmenter on the hill.  6:40 p.m. start time.