Diamondbacks 6, Giants 1: Let There Be Goldschmidt!

Share All sharing options for: Diamondbacks 6, Giants 1: Let There Be Goldschmidt!

In the beginning Kevin Towers brought in Nady and Miranda.

And 1B for the Diamondbacks was without form, and void; and darkness was upon the position in the lineup. And the spirit of God moved upon the face of the minors.

And God saw Paul Goldschmidt, and he was good.

I'm trying not to get too excited about Paul Goldschmidt, and, as such, I've booked my ticket to Cooperstown on Southwest, so I can forgo the change fee if he misses out on the Hall of Fame.

That hyperbole out of the way, although Goldy made his debut yesterday, he really announced his arrival tonight, sending a bomb into the left field seats to give the Diamondbacks all the runs they'd need to beat Tim Lincecum and the Giants, because Dan Hudson brought his A-game. Details of the Dbacks' return to first place after the jump.

Tonight is the sort of matchup baseball fans LIVE for. A two-time Cy Young award winner took the mound for the Giants in Tim Lincecum, while young pitcher Daniel Hudson started for the Dbacks. At stake was first place in the division, and possibly, an upper hand down the road to the playoffs. Meaningful baseball in August: This is what it's all about, folks, and it's something Dbacks fans haven't experienced since 2008. After our 1A starter in Ian Kennedy beat their 1B starter in Matt Cain last night, tonight's game featured our 1B vs. their 1A. Coming out on top in not just one, but both games, is a great feeling.

The outcome wasn't always so certain, however. Both pitchers combined for 5 innings of no-hit ball until new Giant Orlando Cabrera led off the 3rd with a bunt single. In the 2nd, however, Chris Young led off with a walk, but was caught stealing by a country mile in a K-CS double play. It appeared to be a busted hit-and-run; CY took off on a 3-2 pitch to Miguel Montero, but Miggy swung through ball four, and rather than having first and second, or runners on the corners, nobody out, Ryan Roberts came up with 2 outs and nobody on. RyRo drew a walk and immediately stole second, giving Goldschmidt his first RBI opportunity, but he fouled out to Sandoval at 3B to end the inning.

After three straight flyouts by the Giants, Lincecum pitched around a walk to Hudson in the 3rd (who reached base twice tonight) to keep the game scoreless. Cabrera was caught stealing in the bottom of the 3rd to keep Dan Hudson at the minimum batters faced. But after a 1-2-3 top of the 4th, the Giants drew first (and, for them, only) blood in the bottom. Ol' Beady Eyes Cody Ross grounded out, then the Giants' other two deadline trade hitters, Jeff Keppinger and Carlos Beltran, hit consecutive singles. A double from Pablo Sandoval made it 1-0 with runners on 2nd and 3rd and still only one out. Hudson was clearly frustrated and flustered, but he didn't let it get to him. Instead, he got Aubrey Huff to ground back to the mound, getting the second out of the inning after glaring Beltran back to 3rd base. Nate Schierholtz struck out to end the threat.

Ryan Roberts singled his way on to lead off the 5th in front of Goldschmidt, who absolutely CRUSHED a down and in fastball from Lincecum. After Mark Grace had been talking all series about "hitting it to the Coke bottle" at AT&T Park, Goldy did nearly that, sending the ball about 15 rows in front of it. Boom! 2-1 lead for the Dbacks. Hudson also singled in the inning, but no more runs scored for Arizona.

In the bottom of the 6th, Keppinger walked with one out, but Justin Upton made a fantastic play running down a squared-up line drive off the bat of Beltran, and Keppinger, rounding second, was doubled off easily. That's twice now that Carlos Beltran's come through for us with a double play, between last night and tonight. Glad we made that trade, and only had to give up the Giants' best pitching prospect to do it.

A 1-2-3 top of the 7th proved, through strikeout, that Goldschmidt is still mortal. A leadoff Panda single in the bottom went for naught, and Lincecum left the game for Ramon Ramirez in the top of the 8th. Hudson hit for himself, striking out, then Willie Bloomquist grounded out. Kelly Johnson drew a walk in front of Justin Upton, who hit a homer of his own in the same direction as Paul Goldschmidt to make it 4-1. (As jinnah pointed out, it wasn't nearly as deep, however) In the bottom, Hudson pitched around a leadoff pinch single by Aaron Rowand to keep the Giants at 1. Hey, if a Rowand pinch single means the Giants will play him tomorrow, I'm all for it. Brandon Belt, the Giants' own rookie 1B, also pinch hit, but flied out. Note the juxtaposition here. More than a few Giants fans found it upsetting to see their supposed phenom prospect sitting in favor of Aubrey Huff; while the Dbacks were fearless in starting a Double-A promotee.

LOHGY Javier Lopez came in to face one guy in Miguel Montero and gave up a hit. At least, you would've assumed that Lopez was only facing Miggy, but no. A wild pitch, followed by a RyRo double, Goldschmidt walk, passed ball, and Gerardo Parra single made it 6-1. Xavier Nady grounded into a pinch double play and Willie B grounded out to end the inning. Somewhere, Sean Burroughs was bragging that HE could do that, too.

Although Joe Paterson and Brad Ziegler had warmed up already, after Hudson got through the 8th unscathed, rookie Bryan Shaw came on to pitch the 9th. David Hernandez had been busy warming up AGAIN, though sat down after Arizona scored the two insurance runs in the top of the 9th. After getting Beltran to ground out on a flashy diving stop by Goldy at first base, Shaw gave up singles to Sandoval and Huff before striking out Schierholtz and Cabrera to end the game and put the Diamondbacks in a tie for first place in the NL West.

Arizona pitching tonight was fantastic, and Lincecum had another of his solid outings, too. Timmay's 7 innings with 3 hits and 8 strikeouts was only tempered by his 3 walks and 2 earned runs. Hudson did him an inning better, going 8, allowing only 1 run on 6 hits with 5 Ks and a walk. Lincecum labored for 45 pitches through the first two innings but settled down after that, though he didn't have particularly good command all night. Bryan Shaw's sparkling 2.61 ERA (although through only 10.1 innings) makes one wonder why the rookie doesn't pitch more often.

Among hitters, Hudson pulled the neat trick (though not rare for him) of being the 4th most valuable Dbacks hitter, singling to raise his season batting average to .326 and also drawing a walk. Along with Hudson, Goldschmidt and Upton also took advantage of wild Giants pitching with a hit and a walk, and Roberts had two hits and a walk. On the other hand, Willie Bloomquist, Chris Young, Xavier Nady, and Kelly Johnson combined to go 0-12, with Willie B wearing the Texas Star. KJ and CY did draw walks, though, KJ's coming right before Upton's blast. Goldschmidt's homer was not only notable in that it was his first (of many, we hope), but that it came against Lincecum, who had allowed only 2 in his previous 10 starts. Offensive starts Upton and Goldschmidt also made highlight-reel plays in the field, and Upton's will almost certainly be a web gem. 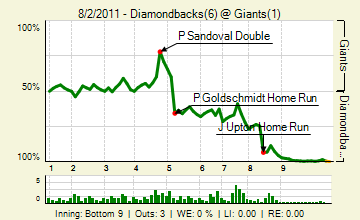 Two Comments of the Night. Why? Because I said so. (Hey, somebody has to balance out soco's refusal to do these)

The first, with what must be a near record 13 recs, was a simple exclamation of joy from Jim:

Just popped in to say

And in the second, Dan took time out from being grumpy about Joe Saunders' ERA to be happy:

My heart leaps and I picture myself among a field of daisies and kittens.

Founder and Chairman of the Hire A Body Double For David Hernandez's Right Arm Commission. A non-profit organization.

Erm... okay. I guess now we know what gets his beanie copter spinning.

Tomorrow, we look to see if new acquisition Jason Marquis can continue his Giant slaying ways as Operation Giant Killer continues. A sweep would give Arizona first place in the division for the first time since June, but to do it, the Dbacks will have to punch Ryan Vogelsong, and his 2.23 ERA, in the mouth. It's a day game with a 12:30 start that wasn't originally scheduled to be on TV. That's been rectified, and there will also be a replay tomorrow night at 7. If you can't watch, be sure to listen.