Diamondbacks 3, Padres 1: In Which We Look at the Standings, Padre Hat Guy

Share All sharing options for: Diamondbacks 3, Padres 1: In Which We Look at the Standings, Padre Hat Guy

We headed into this game three games up on the Giants, looking to take our fifth consecutive contest. It was against the Padres, which is always nice for a team in the playoff hunt. We took care of the Nationals, and we took care of the Friars pretty handily the night previous -- could we lower our magic number and take another one from San Diego, even with Joe Saunders on the mound? After all, Aaron Harang is just a *winner*, holding a totally zomgawesome 12-3 record (with an ERA nearly identical to Joe's). Well, you should have stopped me at Padres, 'cause our Magic Number's down to 27 (as of writing). Hit the jump to see how tonight's events unfolded, this time with a couple of pictures for some added clarity. It's a deal you can't pass up, folks.

Joe Saunders (who entered this game on a three-game skid) was, well... great. He went seven innings tonight, surrendering just four hits while only walking one and striking out three. The sole run given up on the night was the result of a Justin Upton error, leaving Joe's ERA untouched. While Joe seems to be pretty streaky and this level of play is not sustainable, we can only hope that Saunders becomes one of those players remembered as the guy that got lucky at the right time of the year. San Francisco had theirs last year in Cody Ross and Javier Lopez -- let's hope that Saunders can just get hot and continue to win us games like he did tonight. The run I spoke of earlier came in the seventh (yes, the Padres were blanked yet again until the seventh...) after a leadoff walk to Jesus Guzman: Kyle Blanks hit a routine flyball to Justin "ZOMG USE TWO HANDS" Upton. When I say routine, I mean, like... he stuck his glove under the ball and missed it. The ball bounced out of his glove, leaving him looking sorta silly: 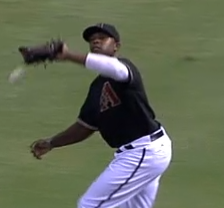 However, them's the breaks. Maybe if Upton weren't so fat and lazy, he'd be able to actually produce at a Major League level. Wait, what's that? He's tied with Ryan Braun for the third-most-valuable position player in the National League? That's not what AZCentral led me to believe. :( Regardless, I feel this will only add to his growing legend as the terriblest of terrible over there. /shrug ... Anyway, after allowing both runners to reach and one fielder's choice lter,  Will Venable singled Guzman home, putting San Diego on the board. That's also the last time their score would change on the night. LOLPadresOffense.

Unlike my recap last week, the offense actually showed up tonight. Funky, huh? After being held scoreless through three by the almighty Aaron Harang of the Padres, Miguel Montero singled to lead off the fourth. After a strikeout from the Golden One, Chris Young shot one to left, putting the good guys up 2-0. We were quiet until the sixth, where Paul Goldschmidt decided to start being awesome again; with two outs, he doubled to center, bringing Chris Young up to the plate. Apparently sick of slumping, CY continued his nice day, singling Goldy over to third and bringing Aaron Hill up to the plate. Young just barely beat out the throw with his speed, too. With this in mind, Harang tried to nab CY at first with a pickoff throw, yet ended up allowing Goldschmidt to score on a terrible throw with Young ending up on third. Oh, and then Hill struck out. That was kinda lame, but tonight's a night of jubilation and happiness. It was all roses from there, as Putz closed the door in the ninth, striking out Venable to complete the 1-2-3 inning.

What do you mean "it's not a Diamondbacks game without David Hernandez making an appearance"? Oh, that's right. Hernandez came into the game during the eighth, relieving Joe of his duties, and immediately walked Andy Parrino (who I'd never heard of - apparently this was his second game with the club). After nabbing another out, Alberto Gonzales lined one to David Hernandez's ankle, which is never fun; it was pretty clear that it hurt pretty bad, and the trainers came out in response. Luckily, he walked off under his own power, and the @dbacks Twitter says it's just a contusion. It certainly looked bone-fracturable, so I'll take a bruise very well, thank you very much. Now, back to being all bright and cheery, cool? Oh, and let me give a nice, warm shoutout to the ass in the stands that robbed Justin Upton of a flyball in the ninth. Sure, it's fair game to try and help your team, but when you act like a complete [your word here] afterwards, well, you're a/n [word you used before]. Here, I added your team's record to your hat: 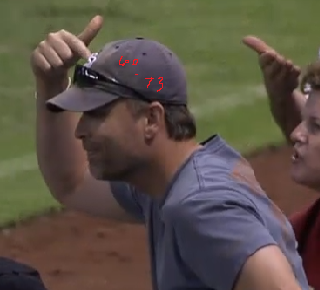 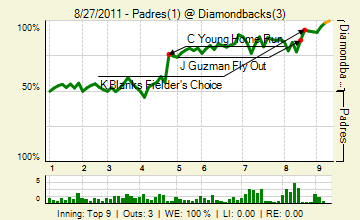 Woot, the roll call is up and working again. Snakecharmer doesn't get enough credit, methinks, for the tool that allows us to run these checks, so thanks a whole bunch once more to you, 'charmer. This probably wasn't the best game to run the roll call on, though: just 400 comments were tallied in the GDT on the night, with 'charmer herself leading the way with 43. Hotclaws and Clefo took silver and bronze with 43 and 36 comments respectively. Ah, well, I'm sure there are plenty of better things to be doing on a Saturday night, as if. Those that realized that the GDT was the place to be would be Skii, Dallas D'Back Fan, dbacks25, Turambar, asteroid, AZDBACKR, 4 Corners Fan, VouxCroux, emilylovesthedbacks, kishi, Jim McLennan, Spaghetti_Monster, NASCARbernet, The so-called Beautiful, Augdogs, luckycc, Gildo, BulldogsNotZags, GuruB, Stile4aly, UofAZGrad, dbacksfann, RKel10, Brian MacKinney, njjohn, and CaptainCanuck. Comment of the Night goes to UofAZGrad, who had five recs for the following:

"It's just a bruise, it's just a bruise..." I'll keep telling myself. Anyway, go turn on the Giants game, which just went into extra innings. Against the Astros. Cue appropriate laughter... Ian Kennedy goes toe-to-toe tomorrow with Cory Luebke as we go for the sweep. It's times like these that I'm glad I only have to write this, as I'm fairly certain I can't pronounce Luebke. I won't try to confirm that, though. See you guys tomorrow at 1:10MST.