After a long and grueling 4-6 road trip, the Diamondbacks are surely happy to be back to home cookin', and maybe even a little home field advantage. They come in looking to extend their winning streak and get some wins against sub-.500 teams.

Well, I'm not sure the offense had as much to do with tonight's win as did the Padres' fielding futility, but it was sure nice to continue scoring runs, no matter how they get to home plate. Josh Collmenter and the Diamondbacks bullpen shut out the Padres and notched another game off their magic number.

The first inning is one that you really need to see with circus music playing in the background. (For your listening pleasure while you read, go here. Really. I'll wait.) Willie Bloomquist put our faith back in #GibbyBall by leading off the game with a double. As Ryan Roberts struck out, Willie stole third and scored as the throw from the catcher went into foul territory. (As it turns out, the ball hit Ryan's bat, but no interference was called.) Justin Upton swung on a 3-0 pitch and doubled to left-center field where left fielder Kyle Blanks missed the ball on the diving attempt. On the one normal play of the inning, Chris Young singled and brought home Upton for a 2-0 lead. Paul Goldschmidt hit a high pop-up behind first base that nobody got to, so CY went to second and Goldschmidt was on at first. During Aaron Hill's at-bat, the double steal was on and the throw went into center field, so Young scored (3-0) and Goldschmidt, after looking around bewilderedly for the ball, eventually made it to third. Aaron Hill then doubled to left, scoring Goldschmidt (4-0) as the ball got by poor Kyle Blanks.

All of this happened with one out. As Jim pointed out, we scored more runs with one out in the first inning than we did in the entire series in Atlanta. Gerardo Parra and Henry Blanco both ground out to end the excitement for the time being.

The LOLDefense by the Padres continued in the second inning. There were two on and two out, and when Chris Young grounded to third, the first baseman Jesus Guzman just flat out dropped it, which allowed Josh Collmenter to score for a 5-0 lead. When Goldschmidt then ground out to third, Logan Forsythe decided to throw to second for the out, not first.

After that, the game settled down and was much less amusing. The Diamondbacks got two baserunners on (and stranded them both) in the fourth, which ended up being the last inning for San Diego's starter Wade LeBlanc. Arizona also had the first two on in the seventh inning, but Cameron Maybin made a spectacular catch at the center field wall to rob Goldschmidt of extra bases. Overall, Roberts and Upton were both 2-for-3 with a walk, Parra and Blanco were 0-for-3, and the rest fell somewhere in between.

Meanwhile, Josh Collmenter was solid. He set down his first seven Padres, allowing his first hit in the third inning. Overall, Collmenter scattered six hits, struck out four, and didn't allow a walk as he pitched into the sixth inning. After he allowed singles to Jason Bartlett and Guzman, he was pulled for Brad Ziegler, who stranded both baserunners. Micah Owings also allow a few baserunners in the seventh inning, but kept the shutout intact. In the eighth, Bryan Shaw gave up a single to Orlando Hudson, who spent his five minutes on first base yapping at Goldy. I can't say he was talking "with" Paul, because I never saw Paul do anything but smile in response; it was all O-Dawg, all the time.

Joe Paterson came on in the ninth to close it out with a strikeout and two easy groundouts. Paterson extended his current scoreless streak to 15 games and preserved the shutout (Arizona's 11th this season) and the win for the Diamondbacks. 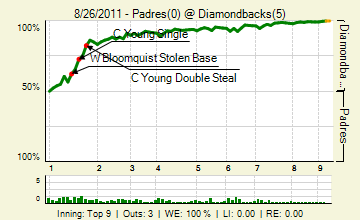 A pretty obvious winner for Comment of the Day. It goes to Dan for this gem:

My name is Josh Collmenter's Change-Up
You killed my father play for the Padres. Prepare to die strike out.

Founder and Chairman of the Hire A Body Double For David Hernandez's Right Arm Commission. A non-profit organization.

The Giants beat the Astros by a score of 2-1 (gee, I haven't seen that score before), so the Diamondbacks maintain their three-game lead. In minor league news, the Mobile Bay Bears clinched a playoff appearance of their own in walk-off fashion. We may have to wait a little while before we bring some of these guys up to The Show.

See you back here at 5pm sharp tomorrow for Game Two of this series, Joe Saunders vs Aaron Harang.