Share All sharing options for: Diamondbacks Thing Of The Week: Bank One Ballpark (Danbury Mint Version) 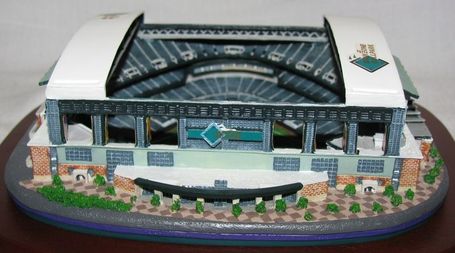 A quick update on some previous items - the seller of our last Thing of the Week, the Kirk Gibson tattoo, having failed to sell it last time, has relisted it! And JoshCollmenter.com is also back on the market, now at the reduced price of $147.75. So you have another chance to pick up these, er, unique items. Speaking of which...

I'm kinda ambivalent about the Bank One Ballpark name [which, for younger readers, is what they called Chase Field before Bank One went through a corporate buy-out]. On the plus side, the "BOB" acronym was kinda cool. But on the other hand, that abbreviated name, along with Jay Bell's son, are responsible for D. Baxter. The mascot has survived as an independent entity far longer than Bank One ever did, and probably explains why I will not be bidding on this particular item.

$24.90, plus $7.85 in economy shipping for this one, which as you've noted comes to you courtesy of the Danbury Mint. If you read the National Inquirer or watch late-night TV, you're probably aware of them, and their fierce rivals, the Franklin Mint. They produce these series of plates, die-cast miniatures, dolls and other "collectibles," to which those of questionable taste subscribe. Sadly, I have to include Mrs. Snakepit-in-Law here: I suspect any eventual inheritance we receive from her, is likely to come with a certificate of authenticity, shall we say... The rest of us can get some amusement from the overblown sales pitches. Here's what Danbury have to say here:

"A sculpture of extraordinary realism...meticulously detailed and skillfully hand painted. The builders of Bank One Ballpark spared no expense in making the home of the Arizona Diamondbacks the quintessential modern stadium, from the retractable roof to the 385-square-foot swimming pool and adjoining spa. Officially licensed by Major League Baseball, this magnificent sculpture features extraordinary accuracy and fine detail. The stadium's red brick exterior and slate-gray stands are precisely replicated, along with the famous stadium sign and natural turf playing field.. Superbly crafted and carefully hand painted by skilled artisans, the sculpture comes mounted on a handsome display base." 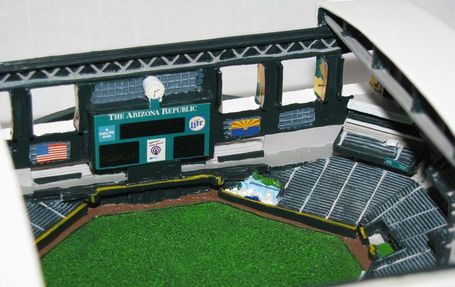 Actually, I have to say, it doesn't look too bad [there's more pics on the auction listing if you're interested], though the unanswered question would still be - would you want a collection of baseball parks? What would you do with them? I can perhaps see the appeal of having your own team's park in miniature. Yankee Stadium, even "superbly crafted"? Not so much. So I'm quite surprised to realize how many people - even baseball fans - apparently do collect these. A thread over on Baseball Fever concerning these models, began back in 2007, and is still going strong, approaching thirteen hundred replies later.

For of course, this is just one of the several sets [not just baseball, but football and other sports] put out by Danbury, who work on basically the same principle as the film industry: if people liked X, then love a lot more of things that are just like X. There's plenty of other parks available on Ebay, at prices ranging from 99 cents (the Dallas Cowboys stadium) all the way up to almost three hundred dollars for the Portland Rose Garden. Someone is even selling the complete set of 47.baseball parks - if you have $2,750 to spare. I'll pass. 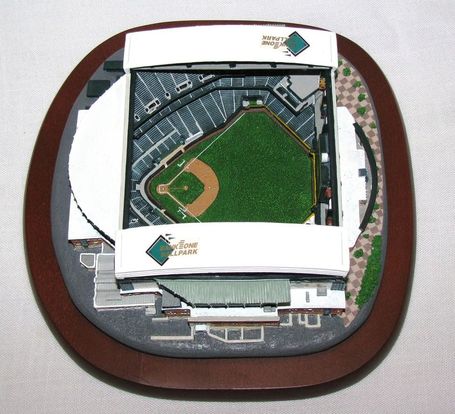