Diamondbacks! Nationals! The Blue Jays 2007 infield versus the Diamondbacks 2007 #3 starter! The Diamondbacks finally managed to break their losing streak yesterday with some exceptional pitching and just enough offense, could they manage to add some momentum to their season? Livan Hernandez and his fluttering 37 mph fastball (not a scientific measurement) waited on the mound, intent on shutting us down...

The Diamondbacks came out swinging, and it looked like we might just have broken the funk. Ryan Roberts and Gerardo Parra, somehow confusingly placed at the top of the lineup, started things off with a single to left and a bunt single. However, after that, we saw a return to previous form- a swinging K from Justin Upton and a double play ball from Miguel Montero ended the inning swiftly. The next couple innings looked distressingly familiar, too, as the DBacks flailed at the slow-pitch offerings from Livo, going down 1-2-3 in the second and third.

The Natinals looked to have brought their bats to the game, hitting early on- they had runners in each of the first three innings. Daniel Hudson, however, was on his game today. Miguel Montero helped, too, gunning down a stolen base attempt in the first in a strike 'em out, throw 'em out double play. Hudson looked to be in trouble in the second, with two on and no outs, but he got the Washington batters to hit into outs, and kept them off the board.

The Diamondbacks bats finally woke up again in the fourth inning, with a Justin Upton reaching on a one-out single. Chris Young slapped a double to left field and a bobble by Jonny Gomes let Upton come in to score. Lyle Overbay then slapped a single just out of the reach of Michael Morse, bringing Young in to put the DBacks up 2-0.

On the other side of the equation, Daniel Hudson was just cruising. Once Arizona took a lead, Hudson held Washington hitless for the next three innings, sitting them down 1-2-3 each time out. Lance Nix managed a two-out double in the seventh inning, giving Washington their first runner in scoring position since the second. Hudson notched a backwards K against Jonny Gomes and kept Washington off the board.

In the eighth, Arizona's bats kicked in again. As Jim warned us that we were in danger of becoming the first team since the mound was lowered (1969) to have six hits or less in eight consecutive games, Ryan Roberts and Gerardo Parra stepped up to make sure that didn't happen. Roberts showed some nice speed taking third on Parra's single, the seventh of the game, and then after an intentional walk to Upton loaded the bases- and ended Livan Hernandez's night- Miguel Montero hit a single into shallow right to stretch the lead to 4-0.

Hudson faced some trouble in the eighth inning, as a single by Wilson Ramos and a double by Ian Desmond but runners at second and third with one out. This time, Hudson was bailed out by some good glovework- first Rick Ankiel lined one directly at Lyle Overbay, and then Ryan Zimmerman grounded out to John McDonald, who made a good play to get to the ball and Lyle Overbay made a good dig on the throw to get the out.

The Diamondbacks didn't make much noise in the ninth, with John McDonald reaching on an error but not moving past first. Hudson stayed in the game, looking to go out and finish his first career complete game shut out. He got Michael Morse to ground out and then struck out Danny Espinosa, but it seems like Hudson hit a wall there. Just one out from ending the game, he gave up back-to-back home runs to Lance Nix and Jonny Gomes. Gibby came out and, after some deliberation, pulled Hudson, calling J.J. Putz in from the bullpen. Two pitches later, Putz got Ramos to hit a pop foul to the right side, and Lyle Overbay hustled over to snag it for the final out, giving Putz save #32 on the season.

Not quite the ending we would have liked, obviously, but a great outing from Hudson to help the team pick up the win. Looking over the box score, I find myself surprised to see that he gave up nine hits over the game. What he didn't do, though, was walk anyone, and he was pretty efficient with his pitches, only needing 102 pitches for 8.2 innings. A well-deserved win for Huddy, #13 this year for him. Neither of our new arrivals made any positive impressions at the plate, but they did show off some fancy defense, so maybe there's hope for them yet. 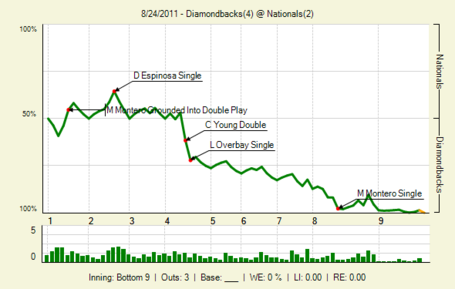 Nope, I'm voiding that last place finish for Miggy. He loses out on WPA because he grounded into the double play to end the first inning, which was a big blow at the time. But he hit in those two insurance runs in the eighth inning. It may not have been a big bump to the win chance at the time, but without those runs, the home runs in the ninth tie it. So he deserves better.

Lot of people showed up to discuss the game today, ending around 730 at the time of the last out. snakecharmer just beat out imstillhungry95, 68 to 66, with Clefo in third. Also showing up to add in their comments were Skii, BulldogsNotZags, SongBird, Zavada's Moustache, Jim McLennan, Backin'the'Backs, cbspga, Rockkstarr12, txzona, SenSurround, porty99, hotclaws, 4 Corners Fan, diamondfacts, TRTFSHR, luckycc, asteroid, Dallas D'Back Fan, The so-called Beautiful, Augdogs, emilylovesthedbacks (Happy birthday!), Jdub220, Bowling_Guy25, Gildo, NASCARbernet, soco, Jargamus Prime, andrewryno, rfffr, and Azreous. Only a few comments were green last time I checked, and most of them required more context than I plan to give here, so no comment of the day. There's an important lesson to learn here about rec'ing more comments. Instead, I'll just award it to Zavada Mustache's An N.L. West Summit Meeting, because it's just that funny.

So the Diamondbacks get the split against Washington, and they'll play tomorrow for a shot at winning the series. Wade Miley will take the mound for the Diamondbacks, and hope for some better results than he had in his first outing in the big leagues. Meanwhile, we go 2.5 games up on the Giants, as they go up against the Padres, looking for a win and a slight bit of dignity. Good luck with that, guys.