That 70th win was quite some time coming. The Diamondbacks still haven't scored more than two runs or got above six hits in a week, but they probably won't care, as this evening, they proved sufficient to break the losing streak with a win over the Washington Nationals. After the one true patron saint of the Pit, St. Penelope of the Cross was invoked, Ian Kennedy blanked the home team for seven innings, and... I can't believe I'm writing this, because it's the first time in more than six years that a writer covering a major-league game has typed this: Sean Burroughs hit a home-run. With Chris Young on-base.

Yeah, I guess that earthquake was an omen of something after all.

Scheduled recapper Sprankton is stuck in Gilbert with car trouble, and I only saw a few pitches, as we had guests over for dinner. They probably think I have a terrible coke habit, such were the frequency of my trips "to the bathroom" - which, of course, happened to be located through our bedroom, where the game was on television. Do not expect too much in the way of eye-witness reportage, though I did see Young work his walk on full count. Burroughs then deposited his first pitch into the bleachers in right, with such casualness you wouldn't know the last time he did it in the majors was in April 2005 [he did have one in the minors the following year].

But let that not disguise the fact that the Arizona offense still has a long way to go. They "pounded" out six hits again - and two of those were by Kennedy. So the non-pitchers in the line-up were a collective 4-for-29. That's seven consecutive games with six hits or less for the Diamondbacks: the last time any team in the NL had a longer streak than that? More than forty years ago, when the Cubs were held to 34 hits over an eight game span in September 1968. The bottom of the order - Young had two of our three walks, while Burroughs and Kennedy each had a couple of knocks - was the only section to have any success.

Fortunately, Ian Kennedy was on his game. He scattered six hits and two walks over seven innings, striking out six batters. There's no doubt when the biggest Washington threat was: they loaded the bases with one out in the fifth, and the heart of their order up. However, Kennedy got Ryan Zimmermann to take strike three and then got Michael Morse swinging, and Washington came up empty. He exited after seven innings and 101 pitches, and David Hernandez and J.J. Putz did exactly what they've been doing all year. They nailed it shut, retiring all six Nationals, and Arizona got a W by their name.

The offense did have some chances to capitalize, that went begging, mostly because the team was, yet again, hitless with runners in scoring position - tonight's 0-for-7 was their fifth such ohfer in the past week. In the fourth, Gerardo Parra singled, and Justin Upton was hit by a pitch [more on which shortly], and a Miguel Montero sacrifice fly advanced both runners. However, Ryan Roberts was denied, despite a rocket-shot to the hot-corner, and Lyle Overbay flew out. We also wasted a first and third, one out chance for insurance runs in the eighth, when PH Paul Goldschmidt hit into a double-play.

Upton was clearly not happy at being hit, and who can blame him. He has had 23 trips to the dish against Washington this year, and been plunked in five of then. Despite protestations to the contrary, there's no doubt that Kennedy hitting Morse in the bottom half of the inning was perceived as intentional - even though it put two on with no outs for the Nationals, in a scoreless game - and both benches were warned as to their future conduct. The rest of this game passed without incident. Upton was removed from the game, but doesn't seem to have suffered anything more than a bruise, which is good news. 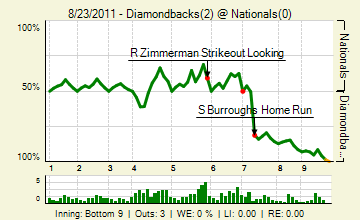 Despite efforts by certain parties to piggy-back on the success of St. Penelope, there's no doubt who has the omnipotence: if she can make Sean Burroughs hit a home-run, her power is mighty indeed. To celebrate this fact, I award two Comments of the Thread, honoring our first win in what feels like forever.

I for one welcome back our sweet bosomed overlords.

The Padres are also six outs away from beating the Giants and Matt Cain in San Francisco, so if that holds, our lead will be back to two games, giving us some much-needed breathing room. Now, if only the offense would mind waking the hell up, we can get on with this pennant race...