So, an earthquake rattles our nation's capital this morning. I'm sure this is an omen of something for the game tonight, but I am not prepared to say what. The Diamondbacks are still alone in first, but if they don't win this one, that could be a memory by the time we go to bed, since their lead in the NL West is back to one, and the Giants enjoy a series at home against the cellar-dwelling Padres. No Kelly Johnson in the line-up, for reasons well-discussed here earlier today, However, at time of writing (2pm), the word is the start of the game could be delayed, with the D-backs not actually have been able to reach the park yet. Must be all the devastation. :-)

A strong groundswell of opinion for ponies in the thread, in an effort to break the streak. But it struck me that we can hardly appeal to new, pagan equine deities, without first turning to those who have helped the team in the past e.g. St. Penelope of the Cross, and the blessed Salma of Hayek. Therefore, we'll be throwing our weight behind them for today's contest: if that doesn't work, however, then tomorrow, you can have all the ponies you want. 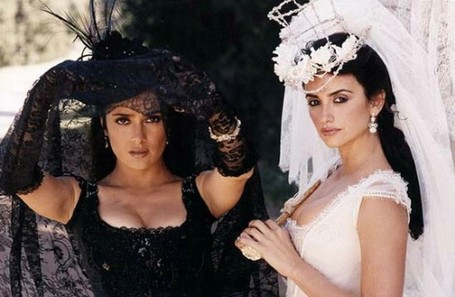