Hopes that the Diamondbacks might get back on track after departing from Atlanta proved unhappily premature. Joe 'Regression' Saunders continued to go in the wrong direction, but that was more a sidelight. The main problem continues to be the offense, which set a new franchise record by failing to get more than six hits for the sixth straight game - all of them losses for Arizona. They were also held to two runs or less for the sixth straight game, and went hitless with runners in scoring position for the fifth time in those contests. The D-backs lead in the NL West shrunk to one game over the idle Giants.

The game started for Arizona well enough, with Ryan Roberts getting a lead-off single, then managing (perhaps more by luck than design) to find himself on second-base with two outs. Clean-up hitter Chris Young, somewhat predictably, struck out swinging [he appears to be taking the "clean-up" aspect to mean allowing the base-runners to trot sadly back to the dugout], and the Diamondbacks didn't get another runner past first base until there were two outs in the sixth. The only other hit before than was a Henry Blanco single to lead off the third. He didn't move from there.

While Arizona continued to struggle, the Nationals took the lead in the second on a one-out RBI single, and with runners on the corners, threatened to add on immediately. However, Ryan Roberts snared a laser-beam at the hot corner, and started a double-play. RyRo was probably the only bright spot for the Diamondbacks. He made some very nice plays at third, starting a double-play to end the second, and playing a number ground-balls perfectly the rest of the way. Regrettably, most of these only came after Jayson Werth had deposited a pitch into the right-field fans in the nation's capital, with two men on base.

That made the score 4-0, and given Arizona hadn't scored that many this geological epoch, marks the spot at which recap construction began. Hope flourished briefly in the top of the sixth. Saunders led off with an infield single, and after Roberts and Kelly Johnson had hard-hit outs, Justin Upton blooped one into left-center. That was followed by a Young walk - the best result we could realistically hope for - which brought up Paul Goldschmidt, with the bases-loaded, as the tying run. However, 'Schmidt failed to happen, as he grounded out softly to the short-stop, and we remained hitless with runners in scoring position.

It was certainly a quick game through six innings. Saunders had thrown ninety pitches, and Nationals' starter Ross Detwiler a mere 78. Outside of that one pitch to Werth, Saunders wasn't terrible, but it's another non-quality start from him; this one scattered six hits and three walks over six innings, with four runs and two strikeouts. That makes Saunders line over his past three outings:
Saunders: 18 IP, 22 H, 14 R, 14 ER, 2 HR, 9 BB, 5 K, 7.00 ERA
Too many hits, too many walks and not enough strikeouts. Those are the three ingredients in the ERA.

The Diamondbacks did manage to break up the shutout in the seventh, with Henry Blanco clubbing his sixth HR of the season. That tied him for the most homers in the majors by any hitter with less than 100 PAs - the other two who have six, are Cleveland's Jason Kipnis and... Wily Mo Pena. Sean Burroughs then got an infield single and Roberts walked, to bring up the tying run again for Arizona, in the shape of Johnson. However, he couldn't get the ball out of the infield either, and the ohfer with RISP rolled merrily on. That was it: Arizona went down in order the rest of the way, and have now scored a total of ten runs over the seven games on this road-trip.

As noted, it was the D-backs' sixth straight game with six hits or less - during the past sixteen years, only two National League teams have had longer such streaks. Curiously, we've played both this road-trip. Washington went seven over the end of the last year and the beginning of 2011. And you will probably be surprised to learn that Philadelphia - the team sporting easily the best record in the National League - also did it for seven between May 14th and 20th this season, scoring a total of 13 runs and batting .156. They rebounded, which gives me hope. But it's as I mentioned earlier today: while it is happening, there's no light at the end of the tunnel. 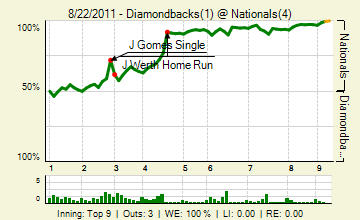 He can have the nickname back when he stops sucking.

"When I get sad, I stop getting sad and be AWESOME instead. TRUE STORY."

I think we may need to do something to break this streak. Maybe have the ultimate image-heavy GDT - albeit not with candy-colored equines, since I don't think we want to adopt the nuclear option yet. Let me think about it between now and tomorrow. Suggestions welcome in the comments. Until then, I'm off to do something more entertaining than watching the past six games, involving a fleshy extremity and a deep-fat fryer.