Share All sharing options for: Diamondbacks Thing of the Week: Kirk Gibson Tattoo 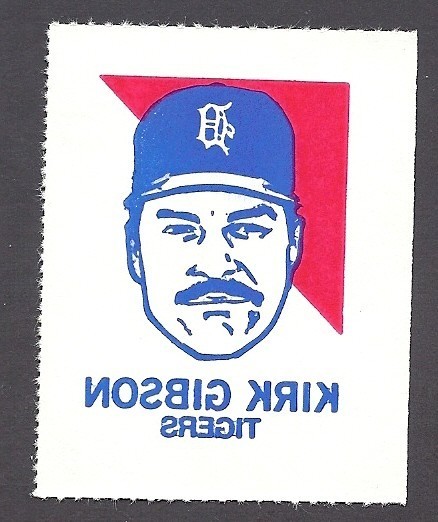 I couldn't resist this one, even though it is technically not a piece of D-backsmabilia. However, the obvious connection to the current team over-rides the fact that this predates not just the Arizona franchise, but 20% of the players currently appearing for it [specifically, Daniel Hudson,. Bryan Shaw, Paul Goldschmidt, Gerardo Parra and Justin Upton]. That said, the idea of buying this, cornering Ryan Roberts and getting him to add it to his collection of more permanent ink, is certainly tempting. And, at a princely sum of 99 cents, highly affordable.

THIS IS FOR THE COLLECTOR WHO THINKS THEY HAVE EVERYTHING

ALSO PICTURED IS THE BACK OF WRAPPER (NOT INCLUDED) SHOWING HOW TATOO IS APPLIED..

I remember these from when I was a kid, but not with any great fondness. The process of application was one which required patience, clean skin and gentleness - not exactly qualities often found abundantly in a nine-year old boy. You'll notice the instructions below include the words "slightly" and "carefully" - it's not a stretch to say that these would be foreign concepts to someone who would want a tattoo of Kirk Gibson anywhere on their body. And so, the results usually had more of the design left on the backing paper than on the recipient.

Even in the (unlikely) event of a successful transfer, they weren't exactly durable. Before long, the recipient usually ended up looking more like they were suffering from an interesting skin disease, rather than sporting the intended illustration. One suspects the ink was probably found subsequently to cause cancer in lab rats - much like the chewing-gum itself. I love the ingredients vaguely described as including "flavors, coloring and BHT (to maintain freshness)". Wikipedia tells me that BHT is Butylated Hydroxytoluene, an anti-oxidant found in - and I kid you not - electrical transformer oil and embalming fluid. 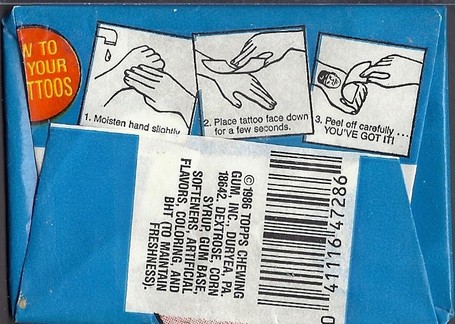 Though, probably, after 25 years sitting in God knows where, it probably would need embalming fluid to keep the chewing-gum edible, rather than possessing the consistency of a terracotta tile. .Not that this appears to be an issue, since the auction does not appear to include either the chewing gum, or even the wrapper. It's just the tattoo. This may explain the lack of interest in this item, even at the low, low asking price of 99 cents. The auction ended ar around 9am this morning with no bidders. We me never see its like on Ebay again...