Share All sharing options for: Diamondbacks 1, Braves 8: Hey, at least the Giants lost

This seems to be a recurring theme here at the 'Pit. It's always nice to have the whole "San Francisco's doing terrible" thing to fall back on, but it's not as nice when the same can be said for us. Today most notably marked the first career Major League start for one Wade Miley, and unfortunately, it was, erm, "one to forget". We're now down two games to nil in this three-game series with Josh Collmenter on the hill tomorrow. Deetz on the game after the jump, but if you were looking to read a more uplifting recap of a game, you may find yourself a bit happier over with the McCoven. As an added bonus, the Giants lost to the Astros. Again. And they're a game away from a sweep. Wait, this is a Diamondbacks website? Forgive me if I do what I can to bring some happiness to today...

There's something about that fifth slot. Armando Galarraga? Yeah. Zach Duke? Yeah. Jason Marquis? He showed signs of not being completely awful, but then he appeared to have hit himself in the shin with his own pitch, much like a voodoo doll. Micah Owings filled in and did respectably, but never really held onto his role as the fifth pitcher on the staff. Wade Miley, fresh off of Marquis's injury (and the bus from Reno), looked to even up the series with the Braves and show the world that he was ready for the big leagues. Well, yeah, it was bad. Maybe the fact that it's the fifth slot of the rotation that makes the pitchers bad and I'm expecting too much.

Arizona scratched a run across in the first thanks to a double from Miguel Montero, hopefully relieving Miley of some nerves. Heading into your first inning as a professional with a lead? Man, there's five pitchers on the west coast that probably wish their offense could score a run at all. He threw pure fastball to Michael Bourn and struck him out on a 2-2 heater, making me think that the game could give us a leg up on San Francisco, who were losing at the time to Houston. Two batters later, Dan Uggla launched the first of his pair of home runs on a fastball that was left up in the zone, giving the Braves the lead (and Miley an ERA that resembled that of Jason Marquis). It was downhill from there, too. Miley's slider never really showed up, or any other pitch for that matter early on: all but one pitch in the first was a fastball. Then again, a 2-1 deficit really isn't the worst thing in the world. It could be worse.

Actually, yeah, it could be worse. Brandon Beachy, the opposing pitcher, singled in a run in the second. Atlanta then posted zeroes until the fifth, where things ultimately fell apart. Michael Bourn led off with a bunt single. Martin Prado was walked. The rapidly-approaching-four-thousand-years-old Chipper Jones knocked one into right, easily scoring Bourn from second, giving Atlanta a 4-1 lead and providing an exit for Miley. Four innings, seven hits, and five runs aren't too pretty, Wade. Brad Ziegler tried to come in and mop up with runners at the corners and none down, yet walked Dan Uggla to start off. By inning's end, only one more run crossed the plate... not bad for bases-loaded, no-outs. Again, guys. Trying to find some silver linings. Bear with me. Prado doubled home another in the sixth, paving the way for Brian Shaw, who got Chipper Jones to single to end the inning. Silly Martin Prado, trying to beat the Parrazooka. Zach Duke came in for the seventh and promptly gave up home runs to both Dan Uggla and Freddie Freeman, and the only silver lining there is that it's hilariously bad. That was all the scoring on the night, so recap done.

Oh, wait, we have an offense, too? After being stifled for the past few games, I'd assumed that we'd agreed that we'll just save our bats for the postseason race down the stretch. We hardly did anything tonight, making Brandon Beachy look like Roy Halladay (except we couldn't beat him). Even without Ryan Roberts or Chris Young, I'd expect more than five hits on the night. San Francisco won't lose forever, and I'm beginning to worry that we don't have the consistent offense we need to edge them out. I don't think San Francisco's a bad team, and I imagine that most would agree. They're simply a good team on a bad stretch. I hope the same can be said about us. 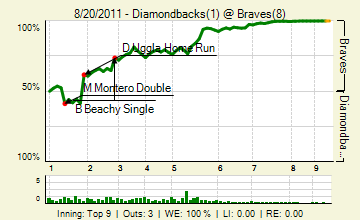 Second place for WPA went to Collin Cowgilll at 0.009. That's mostly representative of the game. The GDT was similar to yesterday's in traffic, as we pulled in 600+ comments for the game. That's probably more than it deserved, but I digress. I'm not sure in the roll call tool is working, so I'll edit that in once I get confirmation. But thanks to everyone that showed up, something our offense continues to prove itself incapable of doing. Ba-dum-tsh...

Comment of the Night goes to CaptainCanuck, who was part of the Bauer Watching Brigade tonight:

Bauer draws a walk to bring home a run!

Hey now, didn't Sean just get his first walk the other day? Give credit where it's due, jeez. Oh, and Bauer went five while giving up three runs and striking out eight and walking three, for what it's worth.

Please, let's not get swept by the Braves. San Francisco has Dan Runzler making his ML debut tomorrow against Houston, but let's go ahead and have the we-need-to-win mindset. Cool?