Share All sharing options for: Diamondbacks 5, Giants 2: The Golden Era Dawns In Arizona

The Arizona Diamondbacks are 1-0 with Paul Goldschmidt in the starting line-up. I trust management will see this and do the needful. While Goldie did single in his first at-bat, this game was more about Ian Kennedy, who went eight innings against San Francisco for the third time this year. He did allow two home-runs, but both were of the solo variety, and the Diamondbacks took full advantage of their opportunities, scoring five times in the sixth. That was all the offense they had, but thanks to Kennedy, was more than enough.

Operation Giant Killer progress: all systems nominal. One. Game. Back.

This might be a shade more random than my usual, rigorously-structured recaps. Wailord was scheduled, swapping with me from Saturday, but he's still making his way home from a hard weekend's geekdom in San Diego. I got the call to the bullpen [more of a Twitter DM, really] in about the seventh, and went scrambling to get ready, long-tossing statistical nuggets and nerdisms to warm up. I think Mrs. SnakePit has had quite enough, judging by her glazed expression, so that usually indicates I'm ready to go.

The Diamondbacks are sometimes accused of being too dependent on the long-ball, critics pointing to their 10-24 record in games where they don't homer, coming in to tonight. This evening, Arizona showed they didn't need that. Hell, the team didn't even need an extra-base hit, but still got five runs - only two teams in the NL have scored more runs with zero XBH this year [led by the Phillies, who somehow managed to plate ten runs against St Louis in June]. We had lost our previous seventeen games where we were XBHless, going all the way back to September 2008 against the Cardinals.

That inning was a thing of beauty. Hardly anything that would pass as a hard-hit ball, even to the hitter's mother, but there were RBI for Miguel Montero, Ryan Roberts, Gerardo Parra and then, the killer blow, a two-run single off the bat of Willie Bloomquist, that spelled the end of the night for Matt Cain [yelling some apparently unkind things as he went, which may or may not have referenced the home-plate umpire and his maternal relationships]. Arizona managed only three hits over the other eight innings combined, but went 4-for-9 with runners in scoring position, all of them coming in that pivotal sixth.

It hadn't started so well. Ian Kennedy served up a needlessly-fat 0-2 pitch to Ol' Beady Eyes, allowing the Giants to lead off with a home-run. And the Diamondbacks were probably robbed of a run in the second on a blown call at second-base: the umpire said the fielder dropped the ball on a transfer after a force at that bag, when the truth was he never caught it at all. Goldschmidt's debut hit - a sweet bit of hitting to right - which followed, was thus not his first RBI. And, given how six of the nine games previously had been decided by one run, I was certainly wondering if this, the latest in an apparently long series of horrible calls this year, might prove crucial.

Kennedy settled down quickly after that opening, retiring the next ten batters faced, and striking out back-to-back Giants to end a threat with two men on in the fourth. Arizona threatened themselves in the fifth, loading up the basis, but Kelly Johnson struck out - he had a miserable night, going 0-for-5 with three K's and five men left on. Kennedy was working very efficiently; he had thrown only 58 pitches through five innings, and posted an all-important zero in the sixth, after his offense had exploded to take the lead. Another lead-off homer in the seventh got the Giants' fans interested, until Kennedy retired the next three.

Of course, what would a D-backs game be without a) a little drama, and b) David Hernandez warming up in the bullpen. Kennedy put two men on, with Giants deity savior acquisition Carlos Beltran representing the tying run, at the plate with one out. With his 109th pitch, Kennedy coaxed the most tailor-made of ground balls to Johnson, who started the double-play. Kennedy's final line: eight IP, two runs on six hits and a walk, with seven strikeouts. His ERA over three starts against San Francisco this year is 0.75, having allowed two runs in a total of 24 innings of work. His K:BB ratio against them is now 25:5.

The ninth saw J.J. Putz come in for the third consecutive evening, and was not without its abdominal rumblings. He got the first two easily enough, before consecutive singles brought the tying run to the plate once again, and the AT&T crowd to its feet. A fly-out to Upton sealed the win for the Diamondbacks, though it seems likely Putz will not be available tomorrow. Still, I'm sure Hernandez will be. In fact, I believe Gibby told David just to stay down there overnight, rather than going to the hotel, and keep loose. It'll save time tomorrow...

Huge win, especially considering Arizona had won only two of the preceding 15 contests at AT&T Park. Parra had a couple of hits, while Bloomquist reached three times in the lead-off spot, on his crucial hit and a couple of walks. Chris Young and Roberts each got a hit and a walk. But the team did exactly what was requested of them in the GDT intro: they played sound baseball, and took massive advantage of the opportunity presented. The result was another game chipped away. As I said, one step at a time, folks: 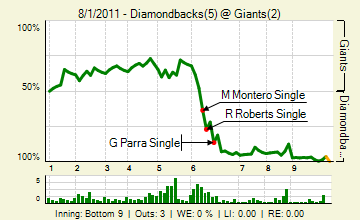