After beating Roy Halladay on Tuesday evening, the road trip has not progressed the way most Diamondbacks would have liked, as they dropped the next two, scoring only three runs. All of the runs in Philadelphia were driven in by Lyle Overbay and Paul Goldschmidt. Perhaps the others might find be able to find their hittin' shoes in HotLanta?

The team had plenty of chances - "two runners on" was a common notation I made tonight - but only two of our runners were able to cross the plate. The Braves, meanwhile, took Daniel Hudson deep for three home runs, and the Diamondbacks dropped the series opener to Atlanta.

New Atlanta Brave Michael Bourn hit a lead off home run off of Hudson, the second leadoff homer allowed by Arizona on this road trip. The next batter, Jose Constanza, also reached base on a throwing error from Hudson, but Dan settled down and kept the Braves to the one run. Constanza reached base again in the 3rd inning, and Brian McCann hit a two-run home run to make the score 3-0.

Normally a 3-0 lead is nothing for the Never Say Die-mondbacks, but they seem to have lost their offense somewhere along the road. Ryan Roberts worked a walk in the 2nd inning, but Derek Lowe struck out the side around him. Kelly Johnson and Willie Bloomquist both singled in the 3rd, but Gerardo Parra - finally hitting second, not eighth - struck out and Justin Upton grounded out meekly to short. Johnson and Bloomquist singled again in the 5th inning, again putting baserunners on first and third, but Parra sharply lined out.

Arizona chased Derek Lowe in the 6th inning, after 99 pitches, seven strikeouts, and after he hit Justin Upton and walked Miguel Montero to open the frame. But Arodys Vizcaino got the next three batters without a problem, Roberts and Overbay on strikeouts and Chris Young on a fly out.

Daniel Hudson was looking pretty solid despite the two home runs, allowing one walk with five strikeouts. After two quick outs in the 6th inning, Chipper Jones hit a home run to left field that bounced off of the yellow line on top of the wall and into the stands, taking away Hudson's "quality start" with it, and putting the Braves up 4-0.

The Diamondbacks managed to get within shouting distance in the 7th inning. After back-to-back walks from pinch-hitter Sean Burroughs and Willie, Justin Upton drove in two with a double. Brad Ziegler and Joe Paterson kept the Brave scoreless in the 7th and 8th (though Paterson gave us all a scare by loading the bases in front of Jason Heyward), and the Diamondbacks had a chance to come back in the 9th against Rookie of the-Year candidate Craig Kimbrel. In fact the Diamondbacks even had two on yet again, with a bunt single from Johnson (who was 3-for-4) and a walk to Willie (who was 2-for-3 plus two walks). But Collin Cowgill struck out, and earlier-hero Justin Upton hit a weak ground ball two feet in front of home plate, and McCann threw him out to end the game. 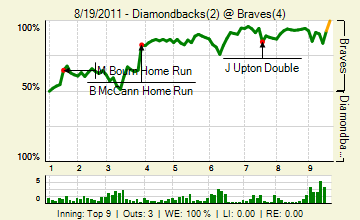 Perhaps some of this could be blamed by getting to the hotel at 5am, but Kelly Johnson surely slept fine in his own bed, half an hour from the hotel. Tonight was the Kelly we all know, and love, and miss. As mentioned, Willie Bloomquist also had a solid tonight. Kirk Gibson finally decided to play Parra higher than the 8th slot in the lineup, but he was 0-for-3 and left four men on base. similarly, Lyle Overbay was 0-for-4 with four strikeouts. It was not a pretty game for the (lack of) Diamondbacks offense.

Roll call isn't working, so that's another thing I get to work on this weekend. There were 700 comments but it was a pretty quiet night. NASCAR summed it up best:

I want my D'Backs back
arrest these imposters.

Wade Miley makes his major league debut tomorrow afternoon, so be sure to tune in for that. Maybe by then, the Diamondbacks will have finished this "Freaky Friday"-like swap with the Giants' offense...