Diamondbacks 1, Phillies 4: Gone with the Rain

Share All sharing options for: Diamondbacks 1, Phillies 4: Gone with the Rain

The Diamondbacks entered the rubber match of their final regular season series against the Phillies up 2.5 games in the division.  They had a tremendous comeback win off one of NL's best pitchers on Monday, then were routed on national TV last night.  Which Diamondbacks team would show up today?  The one that won 7 straight?  Or the one that seemingly did everything wrong last night?

It was somewhere in between, but the Diamondbacks still took the loss.  Luckily, the Giants lost, too.  Details of the D-backs game after the jump.

Ian Kennedy started the game, seemingly ready to be the first NL pitcher this year to reach 16 wins.  The conditions seemed to be favorable, at least the non-meteorological conditions.  The A-Team was playing, the opposing pitcher is good but not Big 4 or whatever it is that the Phillies' rotation is called.  Yes, this would be the one where the Diamondbacks made a statement, and took the season series.

Sadly, it didn't quite go that way.  I'll tell you Ian Kennedy's final line of the night in a second, but first let me explain why it's so small.  First of all, there was a 2 and a half hour rain delay.  He could have been throwing a perfect game and would have been pulled.  The second issue was a routine pop-up near the pitcher's mound in the bottom of the second.  Kennedy seemed to be rolling up to this point, recording having struck out 3 through 1 1/3 innings.

Raul Ibanez got things started for the Phillies with a 1 out double.  Then Ross Gload popped out near the mound, and Kennedy positioned himself to make the catch.  Unfortunately for him, Ryan Roberts got it in his head that he would make the play, instead, and came barreling in.  As he tried to avoid Kennedy, he hit Ian's pitching shoulder.

It didn't seem like anything serious, and it might be shown to be just a bruise.  But Kennedy seemed shaken up after the near collision.  He immediately started working his shoulder, and after this point his pitches didn't seem to have the same placement.  The next batter, Brian Schneider, took a walk.  Now two were on with two outs.  Not too bad of a jam, but Kennedy still didn't seem like he had it.  Wilson Valdez was next up, and he doubled over Justin Upton's head to score Ibanez.  The opposing pitcher Vance Worley grounded out to stop a potential big inning, but the Phillies had a 1-0 lead.

In the bottom of the third the pain would continue.  Jimmy Rollins got things started for Philadelphia with a single.  Then John Mayberry Jr. stepped up and launched a ball into the left field foul pole to extend the home team's lead to 3-0.  Things were in danger of spinning wildly out of control, as the next two batters reached safely, all still with no outs.  Kennedy finally settled down and finished the inning without anymore baserunners or runs, but it would be the end of his night.

So after a rain shortened game, Kennedy's day looked like this: 3 innings, 3 earned runs on 5 hits, 2 walks, and 4 strikeouts.  Vance Worley only lasted three innings, as well, but he was pitching a gem.  Through 3 he gave up only 1 hit and struck out two, all on 30 pitches.

The Diamondbacks hoped that with the rain delay would come a less effective pitcher, but it wasn't to be the case.  The entire offense couldn't get anything going, and the lone run came off a solo home run by Paul Goldschmidt in the 8th inning.  First basemen were responsible for all of the runs the D-backs scored in this series.  The rest of the offense looked awful tonight, striking out 10 times, taking only 1 walk, and managing only 3 hits.  4 measly baserunners.

It was a game dragged on by a rain delay, one that felt over before play resumed, and one you could hope would be dragged out behind the shed and shot. 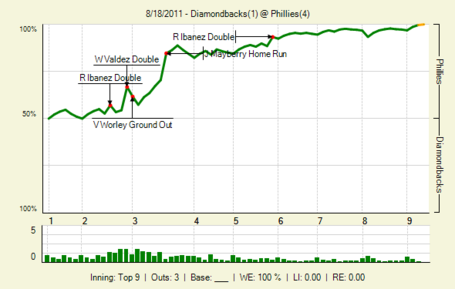 Comment of the Day goes to Zavada's Moustache, summing up everyone's feeling about the end of this series:

The last time a group was this excited to get to Atlanta, General Sherman was leading the charge.

So there you have it.  D-backs lose 2 and win 1, about what most people were expecting or hoping for.  We won a game were weren't supposed to, lost another we were supposed to, then lost one that could have gone either way.  Luckily, the Giants continue to be just a little worse, so the division lead remains at 2.5.

Next up is Atlanta, another playoff bound team.  Diamondbacks need to show what they have, and in a positive way this time.