It's a shame that SBN doesn't allow formatting in its story titles, otherwise the title of this recap would be: The Roy Halladay Lyle Overbay Show. Seriously. I was all ready to call this "The Roy Halladay Show", until the Dbacks came back to shock the baseball world in the top of the 9th.

Obviously, you've seen the score, so I'm not spoiling anything by telling you upfront that the Diamondbacks won. What's fascinating is not only THAT they did it, but HOW they did it.

Details after the jump!

As noted, originally, this recap was going to be called The Roy Halladay Show, and it was going to involve me copying and pasting inning descriptions. Something like this:

No, seriously. That's actually what happened in the top of the 6th inning, and nobody would have faulted you for believing it. Until the 9th, that is.

Before we get there, let's briefly go over what happened over the rest of the game.

Nothing against Roy Halladay. He may not have been at his very sharpest, but he WAS fantastic. He scattered 8 hits and an intentional walk over a 9 inning complete game, 7 of those being singles, and struck out 14. Yes, 14. That's ridiculous. Doc used 122 pitches to do it. Josh Collmenter, for his part, probably had one of the best outings of his young career, too. Last time out, you may recall, Collmenter won by throwing 7 innings of 2 run ball against the Astros, with 4 hits, 5 strikeouts and a walk. This time out, he didn't get the decision, but went 6 2/3 innings, gave up 2 runs against a much stronger offense, allowing 8 hits and 2 walks, 3 for extra bases. Josh beat his previous career high for Ks, however, striking out 8 Phillies. (Previous high: 7 against the Brewers)

In the top of the 2nd, Chris Young singled and stole second, before Lyle Overbay, in his 2nd plate appearance of the year with the team, laced a line drive single to RF to put the Dbacks on top 1-0, but then Sean Burroughs happened, (Seriously...seemed like Burroughs happened RIGHT AFTER Overbay every single time...hmmm) and that was all the scoring success the Diamondbacks would have until the 9th.

Not only did Roy Halladay pitch a pretty impressive game from the mound, but he also reached base twice on a double and a single. The latter led off the bottom of the 3rd, and after a Jimmy Rollins strikeout and Shane Victorino flyout, the always-dangerous Chase Utley (3 hits tonight) doubled, while Ryan Howard walked to load the bases. Unfazed, Collmenter struck out Hunter Pence on 11 pitches to end the threat. Despite running up Josh's pitch count during that appearance, Pence was particularly tormented by Collmenter tonight, with 3 of his 8 strikeouts. Combined with Collmenter's start against the Astros on May 29th, Pence is now 1-6 with 4 Ks against Josh this year.

Josh wasn't as lucky in the 5th. After Doc grounded out, Rollins squared him up for a line drive single before Victorino hit one out of the park to give the Phillies a 2-1 lead. The way Halladay was pitching, it might as well have been a 10-1 lead.

That's because Halladay was in the midst of setting down 12 straight Diamondbacks, 8 of them via strikeout. After a Gerardo Parra leadoff single in the 5th, Halladay didn't yield another baserunner until the 9th, striking out the side in the 5th and 8th. This included a Kelly Johnson pinch hit appearance, coming in place of Joe Paterson, who relieved Collmenter to get Chase Utley out with 2 down, after Halladay's leadoff double. Truly a LOOGY, that Joe Paterson, though one expects Gibson would've kept him in to face Howard had Utley reached.

Instead, after KJ's PK, Bryan Shaw came in to face the Phillies in the 8th. Howard grounded out, but Hunter Pence, glad to finally be facing Not Josh Collmenter, singled. No matter, Raul Ibanez did a very Raul Ibanez thing and grounded into a double play.

Having thrown 100 pitches, with a 2-1 lead, and without having allowed a baserunner since the first batter in the 5th, Charlie Manuel gave Halladay his full confidence, and let him go for the complete game. FanGraphs gave the Phillies an 84.2% win chance. More damning, not only had the Phillies not lost a Halladay start at home since April 29th, but they were exactly 66-1 when leading after 8 innings, and had gone 22-11 in 1 run games. The Dbacks, on the other hand, despite a propensity for comeback victories, came in with a 2-47 record when down after 8 innings.

Make those 66-2, 22-12, and 3-47. You see, along comes the 9th, and a funny thing happens as "Halladay goes for 16", as the SportsCenter headline still read after the game. MVP candidate Justin Upton led off with a single, his only hit of the game, and running his current streak to seven games. Upton's single came on an opposite-field bloop to right field on a pitch on the outside part of the plate. After him, Miguel Montero did the same, singling to right field to bring up. Chris Young was asked to bunt, which was a little odd with nobody out, since he may be slumping, but he rarely hits into double plays. CY bunted foul three straight times for a frustrating strike out. After CY's K, Gibson sent in Collin Cowgill to pinch run for Miggy, and up came, once again, Lyle Overbay.

Despite having closer Ryan Madson up in the bullpen, but more importantly, lefty Antonio Bastardo, Manuel opted, instead, to trust his ace, despite Overbay already having an two singles in the game against his former Blue Jays teammate. Overbay didn't mess around, shooting a line drive to right center on the first pitch he saw, over the head of Victorino.

Oh, the joy! Upton came flying around to score easily, while Cowgill had to dive for the plate around the reach of Carlos Ruiz, reaching home at about the same time as the ball. BOOM! 2-1, Diamondbacks.

Though Sean Burroughs happened, (a popup to Howard with Overbay still at 3rd and 1 out) Gerardo Parra was intentionally walked and stole 2nd, but Paul Goldschmidt pinch struck out looking, Halladay's 14th and final victim of the day.

So, a 3-2 lead over the probable Cy Young winner, in his home park, in the bottom of the 9th. Time for The Easy Button. JJ Putz came on to close it out, luckily facing the bottom of the Phillies' order. Carlos Ruiz worked a leadoff walk, and Michael Martinez bunted to send him to 2nd. Putz was done putzing around, though, striking out pinch hitter Ross Gload (who was 1-2 with 2 walks vs. Putz in his career) and Rollins to end the game and seal the shocking comeback victory.

Not that comeback victories should be much of a shock anymore with this team. This was their 35th, which is good for first in the Major Leagues by 3. The Diamondbacks are also now 3-1 against the Phillies this year, and a season split at worst is nothing to be ashamed of against the team with the best record in baseball. It may be a small sample anomaly, of course, but there are only two teams in the NL against whom the Phillies have only won a single game this year: The Dbacks and the Brewers, both of whom might face the Phillies in the postseason.

Halladay's 7th complete game of the year also came with some shenanigans on the basepaths. CY snatched a pivotal base ahead of Overbay's first RBI, and Parra stole two as well. Halladay was also called for a balk in the 4th. 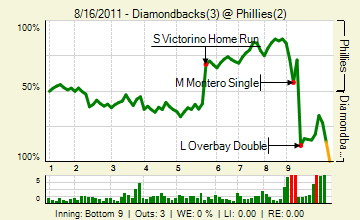 Two comments of the night. This one:

A good day involves a trip to Baskin Robbins for a single dip. We just dunked our heads in the fudge vat.

"Baseball fans are junkies, and their heroin is the statistic." Robert S. Wieder

...for doing an excellent job expressing how most of us felt. That, students, is a good example of a metaphor.

This one by kishi for being prophetic (referring to a post being delayed in the GDT):

Still faster than a DBacksSkins recap.

I trust no explanation is needed.

The Giants lost to the Braves tonight, 2-1 in the 11th, so our lead in the NL West is now up to 3.5 games. In fact, Baseball Prospectus has gone so far as to lower the Giants' odds at winning the division to 71%. Yay progress!

As Jim pointed out in the Gameday Thread (and Eric Stephen on Twitter before him), tonight was only the second time in the last 5 years that a pitcher had struck out 14+ and lost. The first was Cliff Lee, who fanned 16 Braves in May but lost 5-0. Cliff Lee happens to be our opponent tomorrow. 12-7 with a 2.83 ERA are good marks, but one of those 7 came against the Diamondbacks in a 4-0 decision on April 25th. Will the team repeat their performance and win again tomorrow night? Find out tomorrow! Or don't. It's no skin off my nose.