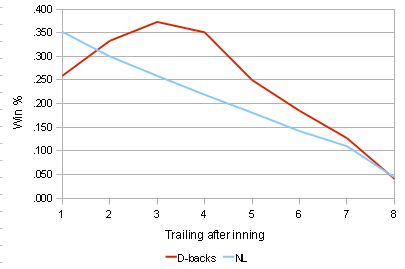 The Arizona Diamondbacks picked up their 34th comeback win of the season yesterday against the New York Mets. That's the most in the major-leagues and means that, in half of their wins this year, the team has been behind at some point in the game. How have we been managing it? The chart above shows the team's winning percentage, and that of all National League teams in 2011, when trailing after each inning from the first through the eighth. What does it tell us about the Diamondbacks' play this year?

As you'd expect, the general trend overall is down - the later the game is, the more likely the team in front is to come out ahead. We also learn how important it is for a team to get ahead early. Even if it's only the end of the first inning, if you're behind, then you only have about a one in three chance of winning. However, teams typically score about twice as many runs in games they win as when they lose [currently 5,501-2,503 in the NL, and the D-backs have scored even more, 73%, of their runs in Arizona victories: they're 35-1 when it's free tacos]. So it's not that the first run should be considered particularly "important", more that it's just a good indicator of the eventual winner.

But 45.5% of all victories are comeback ones, so the Diamondbacks' 50% rate is actually not that excessive. Heck, in 2010, while we may only have won 65 games in total, the majority of those (34) were also come-from behind wins. The difference is that last year, we had 43 comebacks inflicted on us - almost twice as many as the figure thus far (23). Overall, we've gone from -9 to +11 , a very significant turn-around. Another clear difference is that, in 2010, Arizona got walked-off in defeat no less than 13 times: that was never less than crushing, and has happened a mere four times in 2011.

With respect to Arizona's comebacks this season, it's interesting to note that it is not the late innings where the Diamondbacks have proved particularly effective. When trailing after seven, their win % of .127 is hardly any different from league average (.110), and they have won only two games all year when they go into the ninth behind. The first was on May 5th, when Gerardo Parra and Chris Young homered in the ninth against the Rockies, and Justin Upton won it in the 11th with a bloop onto the right-field line; the other was last week's Paul Goldschmidt and Young show against the Astros.

It's the third and fourth inning where the gap is biggest. When behind after four, the Diamondbacks' win percentage is still .351. That's almost identical to the league average after one inning (.352). This shows up if we look at what happens for the team in the fifth inning. Overall, of the 772 games where a NL team has gone in behind, they've come out level in 32 (4.1%) and ahead in (5.3%) of games. Arizona have done much, much better: in 57 such cases, they've tied things up three times (5.3%) and taken the lead seven times - 12.3%. Conversely, the opposition has gone ahead only twice, even though our runs scored and allowed in the fifth inning is the same, 63.

But the number of comeback wins is not just about taking the lead: an equally-important part is holding on to that advantage, and snuffing out the opposition from staging a comeback of their own. So, let's see the graph of win percentage when a team is leading after each inning. 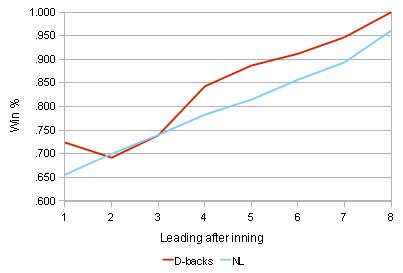 For the NL overall, it's simply a flip of the graph for what happens when you are trailing. But the Diamondbacks are again, clearly better, this time from the fourth inning on. Again, the fourth and fifth are the most successful: Arizona outperforms league average in those two frames by 60 and 72 points respectively. For example, the D-backs have gone into the 5th with a lead 51 times: they have left it in front, 45 times - four times they've been tied, and twice they are behind. Their save percentage of 78% trails only the Dodgers (79%) and the Phillies' insane 92% - their bullpen has blown just three saves all year.

Note that a save can be blown before the ninth. Arizona has just four blown saves there or later, and the team still won three of those games. As mentioned elsewhere, we are an impeccable 62-0 in games where we led going in to the ninth [the late BS we lost was this game against Pittsburgh, which was even after eight, with the BS in the tenth]. All told, the D-backs have six blown saves in games they lost: the only team better at avoiding those defeats are the Phillies, with three. So, looks like both sides should try to avoid the need to try and come back late in Philadelphia. Whoever leads after five during this upcoming series will probably win...

[All statistics through the end of Sunday's games]