Well,this was a little unexpected.

Jason Marquis started for the D'backs and I can safely say confidence was not high. He was decidedly shaky in his previous two starts but I felt once a rapport developed between him and the infield, all would be well.

His groundball appeared to be working to get Turner out in the first, but Wright got a hit off him and advanced to second when Upton fluffed the ball. Still, it didn't seem to faze him and he got the next two batters out. In return, Willie Bloomquist was seen of with a change up, and Collin Cowgill flew out. Justin Upton whanged one over Angel Pagan's head for a double.The ball must look like a beachball to him right now, but Chris Young could not capitalise on it.

Marquis then seemed to be getting into his stride with 3 easy groundball outs. Ryan Roberts popped out, Sean Burroughs did his bread and butter thing and ground out and Paul Goldschmidt struck out, but looked like he could launch one sooner or later.

In the third, CY held a catch, a broken bat helped Roberts do the same but Marquis decided to play footy to let Pagan on base, who stole 2nd but was held off third by nifty work from CY. Bloomquist helped him finish off the side and he wasn't looking too shabby.

Chris Capuano gave up a single to Henry Blanco, but Marquis could not claim himself to be a fully fledged Dbacks pitcher because he couldn't move him over.

Willie singled but Blanco couldn't run fast enough to get to third. Then Capuano finished off Cowgill and JUp, so the D'backs threatened and it looked like Jason was going to get the run support he needed sooner or later.

Then the top of the fourth got tricky. Duda got a hit ,catching a good sinker just right. Bay was quickly out with an impatient at bat.

Marquis then plunked Thole but both of them fell down.Thole got up and took first but Marquis remained down with what would prove to be a broken right leg. Sadly, just as he seemed to be getting a feel for Chase Field and his team mates, that was his season over.

Zach Duke took over but I felt too sad to launch all the nobility jokes I had lined up.

However, the team had to get on with the game. A broken bat stopped Pridie from going anywhere, then he struck out with the fresh one. Tejada drew a walk,and Capuano lofted one which looked dangerous as Cowgill and Young converged on it, but Collin curtseyed out of the way to let CY catch it. It looked like we needed runs in the worst way.

CY had an inconspicuous at bat, but good old Tatman singled to light the spark. Burroughs got on base with a comedy at bat then Goldie smashed a ground rule double to get Ryro home from third, a wild pitch scored Burroughs but that was it for the bats.

My notes for the top of the 5th are problematical;they consist of a blob of burger grease, a cat's pawprint in relish and something about the Mets managing to score a couple of runs off Turner and Duda's bats, also scribbled in a margin,"Cowgill and CY Need to C-O-M-M-U-N-I-C-A-T-E "

The rest of the page was a smear too, but the words JUp HR could just be distinguished. So the score was 3-3 and it could have been much worse. Neither the cat or burger were hurt in the incident.

Probably because Dan posted Miley Cyrus links, Duke started to look wobbly but Goldie picked off Pridie stealing, yeah, the kid with no glove, right ? That let Duke regroup and get the next two to ground out.

In the bottom of the 6th, Ryro struck out, Burroughs gave a ball a ride but Pagan was there, so Goldschmidt slammed his second two bagger just to show the Mets he was serious about this game. Blanco got him home, Parra the came in for Duke but could do nothing.

Micah came in, as he so often does to mop up innings and held the score at 4-3, though it seemed to be a bit shaky with Pagan doubling, getting to third, Duda intentionally walked, but he knew what he was doing and held the Mets scoreless. Though Willie got a walk, to start the bottom of the 7th, no one could get anything done so that was that.

Shaw came in for the 8th,and was helped out by great grabs from Goldie and Ryro making it all look simple.

Igarishi came in and hit Roberts because everyone was bored with hitting JUp, Burroughs walked then Goldie pounced on a pitch like a cat on a juicy mouse to load the bases. Blanco walked in a run and that was it for Ishigaro.

Byrdak came in to face Overbay, in for Micah who hit it hard but not far enough. Beato the came in to face Bloomquist and managed a nice double play. More runs would have been nice but there it is.

Hernandez, he of the everlasting arm, had to come in for the 9th but the scratch squad of pitchers has give him a lead to work with. He got Pagan and Hairston to hit the ball to Cowgill and then Turner flew out to Willie B.

So sad to see Marquis probably get his mojo going then get a season ending injury, Duke did his best, Micah did his part and Hernandez did what he does. 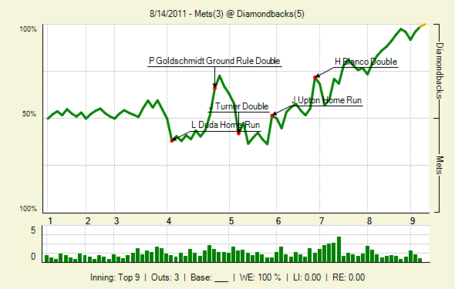 Award for COTD goes to Dan Strittmatter for this mention:

I know it happened a while back, but…. holy crap, Sean Burroughs walked!!!
Founder and Chairman of the Hire A Body Double For David Hernandez's Right Arm Commission. A non-profit organization.
by Dan Strittmatter on Aug 14, 2011 7:08 PM EDT reply actions 3 recs

Dan is also awarded the anti-COTD for the Miley Cyrus links. We're watching you.

We win, 4-3,sweep the Mets, then go to an off day to sort out the pitching rotation AGAIN. Well, at least Diamondbacks baseball is interesting.