Share All sharing options for: Diamondbacks 4, Mets 3: Another Win for Insanely Pretty Kickassness

Fun fact #1: This is actually jinnah ... if you couldn't tell from the title.

Fun fact #2: Before tonight, the only player on the Mets roster I could name was Jason Bay. And, let's face it, that's only because he was a Red Sox.

Fun fact #3: Considering he was pretty much the only Mets player doing anything noteworthy tonight, I don't think I'll bother learning the rest of them. Read on to learn why Jason Bay will be the target of many, many taunts at tomorrow's Snakepitfest 4.2 ... (erm, not just because he's the left fielder).

The fun got started with a bang as Justin Upton launched a solo home run to left field after a quick top of the inning by Ian Kennedy. Snakecharmer informs me that Upton probably saw the final score to the Giants game (2-1 Florida!) and decided they'd all be in the clubhouse by then, and want to show them exactly how a first place team (insert exclamation points here) starts a game.

Not wanting to be upstaged by their should-be-MVP teammate, Sean Burroughs & company provided their own form of entertainment in the bottom of the 2nd. After Xavier Nady was hit by a pitch, Burroughs doubled to left field, causing jaws all over Arizona to hit the floor. Cody Ransom was up next, and in an effort to prove that Kirk Gibson really does know what he's talking about, doubled to left field, scoring Nady and Burroughs. IPK figured he might as well double in his at-bat, too, but took it to center field because, well, left field is just so last year.

I know. You're confused. Jason Bay probably is as well, if he bothered to read the scouting report. Here, let's go over this again, with my notes added in for kicks:

Some bad news came after both Ryan Roberts and Miguel Montero ground out - that Nady hit-by-pitch? Fractured his hand. Ouch. Out goes Nady, in comes the new love of my baseball life, Paul Goldschmidt. I'm sure we'll hear more about the repercussions of this later, so for now, let me give you fun fact #4: Diamondbacks pitchers lead the league with 28 RBI, the Washington comes up behind them with 19.

Fast forward to the top of the 5th when the Mets finally decided to strike back. Angel Pagan led it off with a single to first, advanced on a wild pitch during David Wright's at-bat, and scored when Jason Bay lined a single to left. And, in typical Mets fashion, Josh Thole quickly flied out to left to end the inning.

The 6th and 7th innings went sort of like this: (insert player) flied out to (insert position), repeat six times, inning over. It would have been nice to continue that, but Bay had other ideas in the 8th and doubled to left. He advanced on Josh Thole's fly to right, and scored on Jason Pridie's ground out to first.

The Diamondback fans who started fervently wishing for a few insurance runs were out of luck, and probably reached for their anti-anxiety pills in the 8th, when our old friend Scott Hairston doubled to - what else? - left field against J.J. Putz. Pagan ground out to 2nd for the first out of the inning, moving Hairston up to third, and while Willie Harris' sac fly got us the second out, it also brought the Mets within one run of tying the game. J.J. wasn't having any of that, however, and got Wright to ground out to 2nd, ending the game with the final score of 4-3. 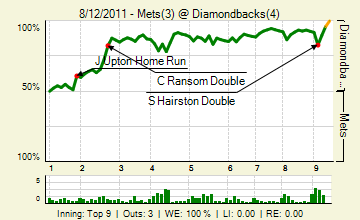 Tomorrow is another day.

But comment of the night IN MY HEART goes to Daron, for this gem during the broadcast, after Montero was hit with the ball in a  ... delicate place.

Just because I can, here is a picture of IPK smiling smugly after the 7th (thanks, 'charmer!). 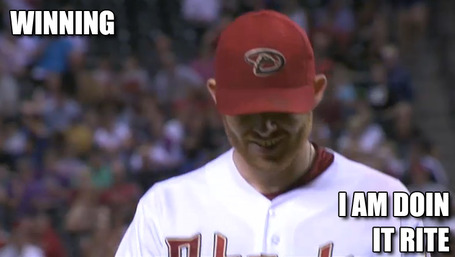 As I'm sure most of you are aware, Snakepitfest 4.2 is scheduled for tomorrow, so join us at the ballpark to see Daniel Hudson go head-to-head with Mike Pelfrey. Or don't, and forever miss out on all the inside jokes that are sure to follow. The choice is yours.