Share All sharing options for: Diamondbacks Thing of the Week: Jarrod Parker's Cleats 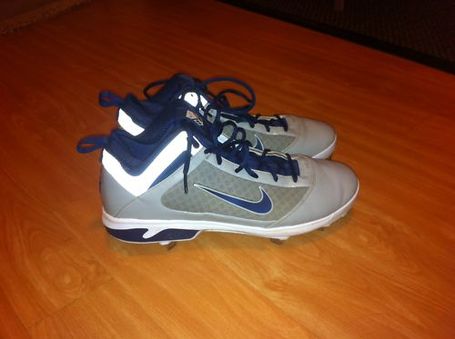 Normally, this feature is used to poke some gentle fun at the Diamondbackmabilia floating around for sale online. As we've already seen, there are some odd items out there, from oil paintings to candy. But this week, we restrain our sarcasm (somewhat), and are happy to feature something that is a) pretty damn cool, b) benefiting a good cause, c) being sold by none other than the player himself.

There's still almost six days left to go, and bidding has already reached $142.50, which is a quite impressive sum. There are 87 auctions currently matching "cleats" in Ebay's Game Used Memorabilia > MLB section, and while there are some which are priced higher [four grand for a pair of Mariano Rivera's shoes?], bids on these are notable by their absence. Parker's is the highest-priced set seeing any action, having just passed the 'Buy It Now' price of $139.95 for a pair of game-used Geovany Soto cleats. Diamondbacks 1, Cubs 0... It's also more than the $110.00 wanted for a pair of Justin Upton cleats.

If you're looking for something cheaper, a starting bid of $8 will get you one cleat - the right one, if you care - previously owned by someone who spent 2009 on the New Britain Rock Cats, who are the AA affiliate of the Minnesota Twins. The cleats have the initial AM on the back, and according to their roster, that could mean either Alejandro Machado or Allan De San Miguel. If you're not interested in those players, perhaps you are a one-legged man with size 12 feet foot, in need of baseball equipment.

I Tweeted Jarrod, trying to find out more about the beneficiaries of the auction, but I didn't get a response, so I am forced to go off what I could find with my Google-fu. Assuming this is the right website, it certainly seems like a worthwhile cause. Their mission is, "To improve the quality of life through baseball," to which I think we can all relate. I particularly liked Section 10:

We encourage players to be leaders and display a positive attitude ~ BE positive, STAY positive, and PASS it on. Show enthusiasm, be competitive, and challenge your teammates to be competitive = Positive Experience For All.

The program has produced a number of players who've gone on to college, and been drafted by various teams, though none are in the Diamondbacks organization. Two have even made it to the majors - the name that's most recognizable is probably the Indians' Justin Masterson, formerly of the Red Sox. The other is Jerry Blevins of the Athletics, who has not played for the Red Sox, so ESPN do not know who he is... I don't really know much more about the program, but if Mr,. Parker supports it, that's good enough for me. So if you have a spare bit of cash, and want to pick up a very cool piece of memorabilia, the link above will get you going in the right direction.