We started the day knowing that the Giants had been routed by the Pirates in San Francisco, 9-2. And while last night's rally might have given us some hope, could we keep that up? We'd run Josh Collmenter to the mound, giving what might be his last shot at holding on to a spot in the rotation. Sure, it's the Astros, but.... The DBacks have disappointed us before. Could we manage to put things together and take first place in the division?

So, a lot of questions how the game would start out for the Diamondbacks. How did Josh Collmenter deal with our concerns in his first inning? Bam, 1-2-3 inning, including a K swinging. Okay, that's a good start, but what about the offense? Could they keep up some momentum from last night's rout? Well, Willie Bloomquist decided that they sure could, and started off the bottom of the inning by hammering a 2-1 pitch to left center for a leadoff home run. Inspired by that, Ryan Roberts followed him up with a double to center. After walks to Miguel Montero and Kelly Johnson, Paul Goldschmidt slapped a two out single to left field and brought in two runs to give the Diamondbacks a 3-0 lead at the end of the first inning.

From then on, Josh Collmenter went into cruise control for a few innings. He gave up a walk in the second inning, but that was the only batter that reached for the Astros in the first four innings. Yeah, Josh had... one of those things you don't mention going for as he headed into the fifth. And then... Things went a little sideways. The Astros started getting hits and stringing them together- single, double, and then two RBI singles cut the lead to 3-2, with the tying run on third base. A sacrifice bunt moved the go-ahead runner to third, and it looked like we might have another collapse from Collmenter ahead. But Josh kept his head in the game, got a pop-up to Miguel Montero and then a ground-out to Ryan Roberts to end the inning, and escaped the inning with the lead intact.

The DBacks fought back in the sixth, with Justin Upton notching his NL-leading 33rd double of the season, and then Chris Young bringing him in on a double. Then Collmenter went back out and showed he wasn't letting his fifth inning struggles faze him, going 1-2-3 through the Astros in the sixth and seventh inning. All in all, Collmenter looked pretty solid, only giving up 4 hits and 1 walk in seven innings. He might have even gotten out with less damage than the two runs he allowed, but for a few soft loopers that just found the grass in the outfield. But his curveball looked pretty good, and he finished the seventh inning with a 4-2 lead.

We earned another run in the bottom of the seventh, when Ryan Roberts singled and then took third on Justin Upton's single. The Astros looked to have Upton caught dead on a pick-off move, but the pitcher made a terrible throw to second, and while they were scrambling to pick it up, Ryan Roberts came in to score standing up to make the lead 5-2.

Bryan Shaw was called from the pen to fill in on the eighth inning and he ran into a few problems. A couple of singles and a walk loaded the bases with one out, and a ground out from Carlos Lee gave the Astros a run and put the tying runner on second base. But Shaw pulled it together and got Brian Bogusevic to ground out to end the inning and leave the Astros trailing by two.

In the bottom of the eighth, the Diamondbacks added on. Kelly Johnson walked to lead off the inning and then stole second base. Gerardo Parra then hit a triple to bring Johnson in to score, and the DBacks took a 6-3 lead. David Hernandez came in for the save, and the Astros went down 1-2-3, with Hernandez snagging a liner about six inches off the mound for the final out. And with that, ladies and gentlemen, we took first place.

A pretty solid game all around- good hits when we needed them, every starter reached base at least once, including Josh Collmenter. Some very solid defense, including a great throw by Kelly Johnson in the seventh inning. And great pitching from Josh Collmenter, who has almost certainly earned himself another start in the rotation. 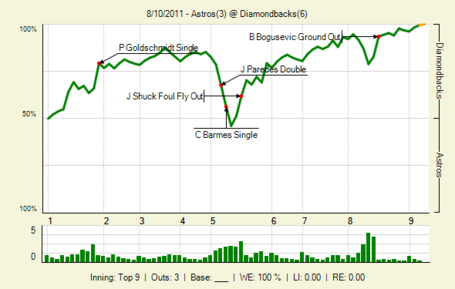 IF that Curve was a woman, I’d take it out on a second date.

I hope Clefo and Josh Collmenter's curveball are very happy together.

So, there we are, folks. A win for us and a loss for the Giants means we end up the night in first place. First place. Enjoy it. Revel in it. And settle in, because I'd like to be here for a good long while.