We entered this series against the Cardinals fresh off of a solid series win against their Central brethren in Milwaukee, and a win in today's contest would mean we'd take our second consecutive series. We'd dropped the three series prior, so it's nice that we've been able to right the ship, especially before the All-Star break, a time that's generally used to reflect back on the first half. It was Dan Hudson tasked today with the duty, facing the always formidable Chris Carpenter. If I told you that the game came down to a battle between the bullpens and Yhency Brazoban pitched for the majority of that time, would you really need a recap? I guess there's a little bit more to talk about, so let's get to it.

Despite getting the leadoff man on base by the way of the walk, the Diamondbacks couldn't get anything done, sending Hudson to the mound to pitch in the inning that's seem to trouble him most this year (if anyone has a source on that, I'd be interested in seeing ERA by inning -- not sure how to find that information!). It was sorta bad from the get-go, and the mood was set for the game early on: hits, a lot of them, and defensive miscues. Ryan Theriot was credited with a single to lead it off and ultimate ended up on second after Sean Burroughs, er, "threw it" to first. After being sac'd to third, Theriot scored on an Albert Pujols single, who then advanced to second on a wild pitch. Luckily, Hudson was able to work out of it, going K/BB/pop-out to end the inning.

Being sure to keep the tempo up, Chris Young and Miguel Montero started off the second with singles, with a Burroughs sacrifice moving both runners into scoring position. Juan Miranda did his best Juan Miranda, proving largely ineffective, striking out after Willie Bloomquist was walked to load the bases. Hudson, clearly wanting to give both himself and his team the lead, singled to center. However, things were a bit more interesting than that: the ball got past Colby Rasmus in center, scoring all three runners and putting Arizona up 3-1. Go team! Hudson was ultimately stranded on second, but the inning was by and large a success. Take these victories today while you can, young reader. Not that I'm in any position to call anyone young.

After tacking a run in the third on consecutive doubles by CY and All-Star Justin Upton and adding another in the sixth on a KJ double, Arizona entered the bottom half of the sixth up 5-1. A quick single/double/walk spelled the end of Hudson, as Sam Demel entered to try and escape the bases-loaded, no-outs situation with as little damage as possible. The RBI Skip Schumaker single wasn't the ideal follow-up, but the RBI GIDP from Ryan Theriot was pretty favorable. After a David Freese flyout, we escaped giving up just two runs. I'll take it; 5-3, Arizona. Ryan Roberts added another run on in the following inning in a pinch-hit situation, pushing the lead to four and allowing us all to take another breath. End the happiness... here.

Fast-forward to the eighth. Yhency Brazoban, fresh off of a scoreless inning (in which he allowed a walk and single), was sent out once more. Jon Jay led off with a single, bringing Schumaker to the plate. He promptly singled to Justin Upton in right, who booted the ball and allowed Jay to third. Hurray, errors! Theriot then popped out to Chris Young in center, who dropped the ball on the transfer and allowed Jay to score. Hurray, errors! While a nice strikeout brought the outs to two, Albert Pujols strutted up to the plate, his team down by two with a runner on first. Any guess as to the result of the at-bat? 6-6.

Although this is a bit of an anticlimactic end, Joe Paterson came in for the ninth inning (shocking Brazoban wasn't sent out again) and allowed a quick leadoff single. JoePa got an out on a fielder's choice, but then walked Molina and brought pinch-hitting Tony Cruz to the plate. Cruz crushed one into deep right field, in between Young and Upton, socoring Rasmus from second and taking the game for St. Louis. Hurray, bullpen! Already being down one J.J. Putz and a David Herandez to boot, we weren't in the greatest of positions to enter the game. It's just a shame it came down to that fact. 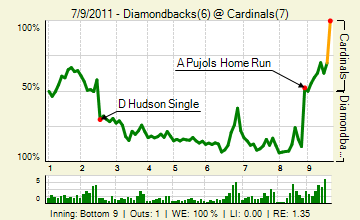 CotD goes to Clefo, who posted the following in response to the absence of Gerardo Parra's bat in the lineup:

He needs a day off from… hmm no…

jinnah made the lineup card?

Sigh. At least the fun of the All-Star festivities are soon approaching and we can sit back and try to see where exactly we're at. Anyway, I've got some professional Starcraft 2 to go watch, so I'll go do that and pretend baseball doesn't exist. Luckily, tomorrow's a new day. Except it's one where Zach Duke goes toe-to-toe with Jaime Garcia to see if we can take the series. Hmm.