Share All sharing options for: Diamondbacks 7, Cardinals 6 - A Tale of Two Innings

It was the best of games, it was the worst of games. First, the Arizona Diamondbacks got behind the St. Louis Cardinals early. It looked like Ian Kennedy might have a short outing, and it looked like Kyle Lohse might throw a perfect game. Then the offense came back to tie the game, and Kelly Johnson's grand slam gave them the lead. But then the Dreaded 8th Inning™ from 2010 returned...

Would the Diamondbacks marry for love or be executed for treason? Read on to find out how the story ends...

Lance Berkman got St. Louis on the board first with a home run to right field in the second inning, and they added on in the third inning in what Tom Candiotti dubbed "The inning of plays that was almost made." After a leadoff walk and a double, David Freese laced a hit that Sean Burroughs took away with a great dive, and then gave it right back with a poor throw to first base. That loaded the bases for Albert Pujols, who only hit a sacrifice fly to score Daniel Descalo. Matt Holliday's hit was nearly caught by Gerardo Parra but his dive was ill-advised and the ball got by and allowed Skip Schumaker to score. After walking Berkman to load the bases and set up the force play, Colby Rasmus and Gerald Laird bounced into fielder's choices. We all agreed that it could've been much worse for Ian Kennedy than a 2-run inning, and the Diamondbacks were only in the hole 3-0.

The Diamondbacks came right back in the 4th inning in support of their starter. Stephen Drew broke up Kyle Lohse's perfect game with a nice double to center field, and Justin Upton worked a walk behind him. After fouling off some pitches, Chris Young laced a triple to left that bounced off of Holliday's glove and rolled behind him. Drew and Upton both scored, one a step after the other (as Drew had initially thought that was caught) as CY skeedaddled over to third base. Miguel Montero singled to right to score Young and tie up the game. A double, a walk, a triple, and a single, all in a row. Sadly, neither Burroughs nor Juan Miranda could manage a home run to give us a cycle, but a tie ball game would do for now.

Ian Kennedy was at 61 pitches after the first three innings and 80 after four, but he settled down nicely and ended up throwing a "quality start" - 6 innings, 3 runs (2 walks, 3 strikeouts) on 100 pitches even. Whether or not he went out for the 7th may have depended on what his offense did in the top half of the frame, because was due to bat fourth. Miranda singled with one out and sure enough, Wily Mo Pena came out on deck, and Lohse walked Parra in front of Pena. But Gibby pulled Pena back and sent up Ryan Roberts, who singled to left to load the bases for Kelly Johnson. At this point, Sutton and Grace couldn't imagine LaRussa leaving Lohse in to face Johnson, but sure enough, Dave Duncan came out to give Lohse a talking-to. That talking-to lead to a Kelly Johnson grand slam just over the right field wall! It was Kelly's fourth career grand slam, and second this season. The Diamondbacks had a 4-run inning which put Ian Kennedy in line for the win, and mrssoco didn't even have to sacrifice her womb for it this time.

Interestingly, not even the grand slam convinced LaRussa to take Lohse out of the game. Never mind that he was on his way to 119 pitches, which was the most he's thrown since a game back in 2002. I present to you this wonderful recap of the decision-making process by Zavada's Moustache:

Indeed, only after a harmless pop fly did LaRussa make to move to Jason Motte (who then allowed consecutive singles to Upton and Young but Montero struck out). Then, it was down to a battle of the bullpens.

Joe Patterson came out for the 7th inning, and after a single and a strikeout, made way for Aaron Heilman. Heilman was beaned by a line drive off the bat of David Freese - it hit him in the upper chest area near his left arm, but Heilman managed not only to not fall down but also to throw out the lead runner at second base (since he had frozen when he thought Heilman might catch it). Heilman then put a sequence on Albert Pujols that left the Bionic Man-arm Man stomping at home plate at a called strike three. (I hope MLB chooses to put that on the replays, because it was hilarious.)

But then Gibson sent Heilman back out for the 8th inning, which all of us thought might be a bad idea, except before we could even comment on it, Matt Holliday was hitting a home run to left-center field. He also gave up a single to Berkman before Alberto Castillo was brought in. Castillo got two quick outs before Nick Punto singled to put runners at the corners and then Descalo doubled on a ball that took a funny hop off the wall and was misplayed by Parra, allowing both runners to score and making it a 7-6 ballgame. Sam Demel came in and got the last out of the inning by striking out David Freese and preserving the lead.

The Diamondbacks couldn't score any insurance runs in the top of the 9th, so we sent out David Hernandez to face the middle of the St. Louis order order with only a one-run lead. After Pujols walked, Holliday popped up to first base on the very next pitch. Then Berkman ground out to Drew for the ga-- oh wait, no, the sure-handed Drew bobbled the ball and both runners were safe and the nail-biting continued. But Hernandez struck out Rasmus on three fastballs topping 98MPH and pinch-hitter Jon Jay ground out to Kelly Johnson to preserve the win. 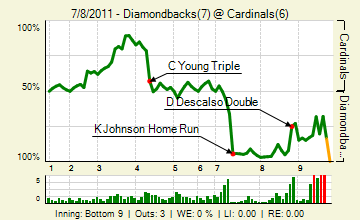 I already used the most-commented post in the recap but the second-most commented one was just as good:

It was also partly prophetic, as he returned to his giving-up-baserunners ways in the next inning.

Hat-tip to Daron Sutton for the title and to kishi (and SparkNotes) for help with the literary references. Tomorrow it's Daniel Hudson vs Chris Carpenter, so tune in at 4pm for what should be a good game!