Share All sharing options for: All-Star Diamondbacks: Eat, Drink and Be Merry...

The consumptive part of the ballpark experience is not to be under-rated. Going to a game is pleasant enough, but tucking in to a juicy, plump hot-dog, washed down with a frosty beverage of your choice makes it all the better. The good news is, if you're coming to Chase for any of the events on the All-Star program, the ante is definitely being upped at the concession stands, as well as on the field. Levy Restaurants, who run the concessions at Chase, and their Executive Chef Michael Snoke, have come up with an All-Star selection of additional items which will be offered over the upcoming festivities.

Details after the jump. You might want to go get a sandwich. Because if you're not feeling hungry now, trust me, you are about to...

The aim of a lot of the items is to showcase what the Southwest can offer in terms of regional flavor, with a particular emphasis on ingredients produced locally. The first one to leap out and say "Eat me! Eat Me!" are the Snake Bites - I wonder if we should be charging them a royalty for the name? I would accept payment in a decent-sized helping of these habanero chicken and pepperjack cheese taquitos, served with an ancho-lime dipping sauce. They will be available at all Red Hot Grills throughout the park, and I hope they become a permanent addition to the menu., as I've always felt there was room for more Arizona-themed concessions.

Of course, the ballpark staple is the hot-dog, and who said there's no such thing as an Arizona hot-dog?  Oh, yeah: this guy. More proof of how wrong he was comes in the shape (which would be long and thin, I'm guessing) of the Rattlesnake Dog:. It's a chargrilled, footlong sausage,  locally made, filled with cheese plus three types of chilies, and topped with a spicy remoulade and fresh pico de gallo. Man, I'm drooling thinking about that, though I can also feel my arteries hardening as I type...

That's not the only uber-dog to be found at Chase in the next few days. There's an entire pack of Extreme Loaded Dogs: all-beef hot dogs with a selection of toppings. Let's be honest, some of these sound more appealing than others [who puts Fritos on a hot-dog?], but there should be something for everyone. Except, y'know... vegetarians.

Naturally, the posh seats get more options. There will be a cart on the Club level selling  Loaded Tamales; not sure if this is a temporary relocation of ReyGloria's Tamales from its usual spot near Section 137. And if you're in the really upmarket sections - the ones that get in-seat service - there will be an All-Star BBQ Combo. That's a pair of sliders, pork and slow-smoked short ribs, served with Levy Restaurants signature barbecue sauce and vinegar slaw. Finally, there's the  All-Star Summer Heater sandwich, with mortadella, smoked ham and salami, topped with jalapeno-olive relish and pepperjack, served hot on grilled focaccia bread with onion rings and fried pickles. 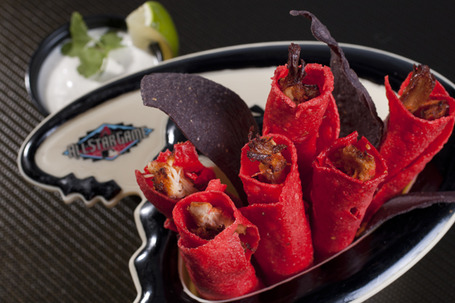 Hey, now you can not only read Snake Bytes, you can eat Snake Bites...

Something to drink? Don't mind if I do. The pitch on this part was, "With the temperature sure to be sizzling this summer in Phoenix, Levy Restaurants will also have plenty of beverages to keep baseball fans cool." Mind you, some of the possibilities appear to be packing a bigger punch than Wily Mo Pena, so I'm not certain they will be quite the ticket to avoid dehydration. The good news is, $4 drafts will still be being sold, but for those who prefer their drinks a little more... Well, the word "foo-foo" comes to mind:

Equally impressive is the serious volume of food and drink involved here. Over the three days, Chase Field will be hosting close to 150,000 fans - more than were at the University of Phoenix Stadium for the Superbowl and Wrestlemania combined. They will be served by 54 concession stands and carts (I just hope the staffing will be sufficient to ensure a quick turnaround, and that's not counting the food served up in the park's 58 suites, six party suites, or private clubs such as the Audi Quattro Club, Arizona Baseball Club and Sedona Club.

Levy's estimate that 80,000 hot dogs, for example, will be served up - possibly more, if Pablo Sandoval shows up. Assuming eight inches per dog, my math that's enough to stretch from Chase Field down the 202 highway and over the Mill Avenue Bridge to Tempe Beach Park. Which would, at least, make a change from the usual road-works. Also scheduled to be consumed by hungry fans:

No statistics were immediately available on the quantity of Pepto-Bismol that will also be consumed over the course of the weekend. All sarcasm aside though, I will certainly plan to try out many of the new items, so stay tuned for reviews of as much as my stomach can handle.