Diamondbacks 4, Cardinals 1: Swinging in the Rain

Share All sharing options for: Diamondbacks 4, Cardinals 1: Swinging in the Rain

Given that I left work at 6:30, I was pleasantly surprised the game was only in the 2nd inning when I came home.  A little rain delay never hurt anyone, right?  We're spoiled here in Arizona, what with our fancy "roof" and what not.  There was a rain delay and that would be the end of it, or so we thought.

In reality, it wasn't that much delaying, though it did total to about 2 hours.  The middle delay came in the 6th inning, and those watching FSN Arizona were treated to some World Series of Poker, and by treated I mean subjected to a horror normally reserved for serious felons and sadists.  It did end, eventually.  The game went on, but I'm getting ahead of myself, aren't I?

Joe Saunders took the ball to start the game tonight, continuing his decent form from the past month.  He looked good, or perhaps the tired Cardinals, who played 13 innings the night before, made him look good.  Either way, he didn't allow a run the 5 innings he was allowed to work, and scattered 4 walks and a hit for his effort.  He might have kept going, but the rain delay forced Gibson's hand early.

Before the rain delay, there frankly wasn't a lot going on beyond Cardinals errors.  The Diamondbacks first run was a gift from David Freese's throwing error to first, allowing Xavier Nady to be safe, and Chris Young to advance to third.  Sean Burroughs, in a surprisingly not awful turn, brought Young in with a sacrifice fly.  It would be an early lead, but one that the Diamondbacks would not relinquish for the rest of the game.

St. Louis' Kyle McClellan, certainly a distant relative of our very own Jim, put in decent work before the rain delay.  In fact, the two teams largely played an equally listless game through the first 5 innings, with only an error being the difference on the scoreboard.  It was after the rain delay that things went in opposite directions for the two teams.  Where Gibson elected to pull Saunders in favor of a relief pitcher, Tony La Russa opted to run McClellan out again.  His decision was likely effected by the day's previous marathon game, but it would cost the Cardinals dearly.

Before the rain delay Ryan Roberts had worked an easy walk with the rain pounding around him.  When the top of the 6th was resumed, Justin Upton quickly went to work, after a Stephen Drew fly out, and launched the second ball he saw to left field for a home run.  It gave the visitors a 3-0 lead, and they wouldn't need anything more to ensure victory.

The Cardinals struck back in the bottom of the 6th, and it seemed for a second that the game would suddenly turn on its head.  If the first 5 innings were a trudge through mud, then the 6th inning seemed to suggest the next few would be lightning and thunder.

Micah Owings was Saunders' replacement, and he seemed to start out okay after getting Ryan Theriot to pop out to Miguel Montero.  Unfortunately for him and Arizona, the fearsome heart of the Cardinals lineup was soon due up, and the home team went to work.  David Freese started things off with a single.  He was joined by Albert Pujols, who drew a walk.  Matt Holliday stroked a nice ball down the left field line for a double, allowing Freese to get the Cardinals on the board for the first time all night.  Facing All-Star, and strangely resurgent Lance Berkman, Owings needed two outs, but had no easy solution.

This felt like the at-bat of the game, more so than any featuring Yhency Brazoban in the 8th, and the Owings had to be at his wiliest to win this battle.  He missed first with a ball, then came after Berkman with two straight high strikes.  Berkman fouled the first, and missed the second.  Owings had found his opportunity.  He tried to go high again with another fastball, but Berkman wasn't biting.  Owings wasted a pitch, put the count to 3-2, then he reared back and threw another high fastball, and Berkman wanted it.  He wanted it so bad, and swung as hard as he could, but it was the exact pitch he shouldn't have swung at, and he was out.  Yadier Molina's deep fly out to left, which looked to be a home run at first, almost was anti-cilmatic after that at-bat.

With the outcome no longer certain, the Diamondbacks went back to work in the 7th and scored another run to crystalize the final score.  Gerardo Parra got it started by doubling to right, and he was brought home by a Roberts single.

Yhency Brazoban had to face the St. Louis' version of the Murderers Row, but while we feared a collapse, he was ice.  He put the Cardinals away in order on 9 pitches.  The game still had another inning to go, but it was effectively over.  The Diamondbacks have another win, and are keeping pace with the Giants still. 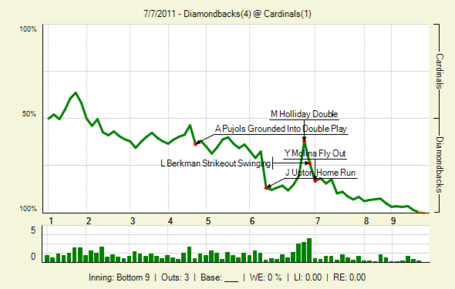 Office party without either: Miguel Montero (-6.6%)

Not a lot of relevant recs to pick a COTD from, so try harder tomorrow.

Speaking of the day after today, tomorrow is when the Diamondbacks face off against the Cardinals again;  first pitch is at 5:15pm Arizona time.  See you then!